What is the state of the Biobased Economy in Europe?

The Biobased Economy in Europe is developing rapidly. Europe can play a leading role, but only if courageous political decisions are made.

I represented Wageningen University & Research in this expert group, which comprised representatives of various industry associations (from chemistry to biotechnology and from wood and rubber to starch producers), government agencies and a few independent representatives of research institutes. I was also in the four-man group which carried out the assessment. We concluded that substantial progress had been made in a number of areas. At the same time, a number of crucial issues remain, and far more concrete measures are required to give the market for biobased products a much-needed boost.

The expert group determined that the state of affairs in some areas was quite good. For instance, we saw that there had been a great deal of investment in technological innovation, including in pilots and demos. Moreover, considerable progress had been made in the development of European standards and the related certification of biobased products. The latter are important for manufacturers to be able to claim that products are biodegradable or contain a certain percentage of biobased ingredients.

I see our analysis as a wake-up call for politicians. Europe can play a leading role in the biobased economy, but only if courageous political decisions are made to show that we prefer biobased to fossil products, or at least to create a more level playing field with respect to the petrochemical and bioenergy markets. In actuality, Europe is currently being overtaken left and right – by Asia, which is investing heavily in attracting manufacturing facilities for biobased products, as well as by countries in the Americas, which have actually started transitioning from a fuel-driven to a materials-driven biobased economy. For an example, see the recent proposal in the United States to introduce a tax credit for biobased chemicals. 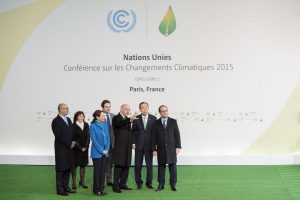 What is true for the Biobased Economy in Europe as a whole may be even more relevant to the Netherlands. While our strong position in agro-food and chemicals is an advantage, our tradition of petrochemical applications is a drawback. In other words, we stand to win, as well as to lose, a great deal. If we wish to play a leading role in the biobased economy, our ambition must be clear: where does the Netherlands want to go, which industries suit this vision and which do not (or no longer do)? The time has come to make choices and my visit to the COP21 in Paris last December left me with a positive feeling in this respect.

Read more about the Biobased Economy