This week the report by the National Academy of Science was released: Genetically Engineered Crops: Experiences and Prospects. Not surprisingly, for someone following the literature, the report did find that GE crops are as safe as crops produced by other means often referred to as “conventional breeding”. What is surprising is that the authors recommend to implement a tiered approach for the assessment of GE crops. This is surprising as despite the finding that the GE Crops are safe, a more cautious approach for approving is suggested. Think about it. 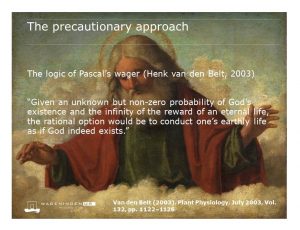 A technology that is as safe and many scientists claim even safer than conventional breeding will be more strongly regulated than the less safer technology of “conventional breeding”. The report recommends: “Even in their current state of development, the technologies could enable a tiered approach to regulatory testing in which any new variety shown to have no new intended traits with health or environmental concerns and no unintended alterations of concern in its composition would be exempted from further testing.” I call this falling into Odin’s Trap*. Every new plant developed has traits that are different from existing once, why otherwise spend money 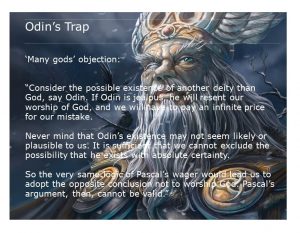 developing those plants? These new traits will always have an effect on the environment or human health, through changes in yield or input use, changes in nutritional composition. The difficulty will be to identify what will and will not be considered an environmental and health concern. As past experiences show this can become a very lengthy debate.

As the suggested tiered approach, one way or the other, is very likely to happen, what are the consequences?

Over the past decades we have observed an increase in vertical integration of food supply chains, where product differentiation on the supply as well as on the demand side is one of the major drivers. We recently had a workshop at UC Berkeley on Strategic Perspectives on Innovation in Agrifood Supply Chains in Emerging vs Developed Markets with about 100 participants from all parts of the world. One of the key lessons from the workshop was that designing supply chains has become more important and more demanding. Examples from the companies Mars and Tönnies showed the integration of private sector research into their food supply chains. This was partly driven by external forces such as decline in cocoa production due to diseases or higher demands on animal welfare by consumers, but also endogenous forces such as securing high quality supply inputs, in those cases high quality of cocoa and high quality of meat.

The recommendations of the NAS report show this will not be limited to chocolate (Mars) and meat (Tönnies) but become a more widely used practice. We will observe that plant breeding and animal breeding as well will become an integral part of food supply chains. We will soon not talk about farm to fork but about lab to farm to fork.

What will be the implications? This will be difficult to say. In the short run the development of new plants might slow down while in the longer run multi-national companies will become, if you like it or not, more important in delivering technologies to different parts of the world.