After months of preparation, the adventure will finally start today! I am on my way to Brazil for my master thesis! At the moment I am in the plane to São Paulo, Brazil, where I will take another plane to Belo Horizonte. In Belo Horizonte, the 6th biggest city in Brazil, I will be picked up by Filipe Cunha, head of the research and subsequently my supervisor. During one hour we will drive to the federal university in the village Florestal. At least, that is the plan.

Currently, at 10720 latitude above the Pacific Ocean, with the continuous humming of the plane and a sleeping German lady next to me, I have time to give you a small peak into my research. First I will tell you how I ended up here, because how is it possible that a Plant Scientist suddenly ends up in Brazil to study a bird?

How it all started

We start at the beginning. During my bachelor Plant Science I wanted to follow more courses related to ecology than offered in my bachelor; courses that cope with the dependent systems of flora and fauna. Therefore, at the end of my bachelor I followed some animal related courses for my minor; I chose the minor ‘Wildlife and Biodiversity’. Naturally, as Plant Scientist it was not common thing to choose a minor with animals, but fortunately I got permission from the university. Anyway, the first course in my minor was Life History Evolution. This course was also followed by Robert Benjamins (important for later). The course Life History Evolution was, among others, given by Filipe Cunha. I really liked the course and thought it was really interesting! Therefore, and because of my lack of scientific animal knowledge, I asked quite a lot of questions. Because of this, I apparently was noticed by Filipe. What I did not know, was that Filipe, beside lecturing, was secretly searching for people for his project. After two weeks I was called by Filipe after a presentation. Filipe explained that he was starting a big research around a bird, which has never been studied before, and asked me if I was interested to participate in this project. Because of all the enthusiasm I had to ask him to repeat the whole story again. Obviously, my response was clear.

For study or fun?

Next I had to choose where I would do this research for; for fun in my spare time or as a master thesis or maybe as a master internship. My bachelor was almost finished. After long thinking, this research has persuaded me to choose the master Animal Science. The change from bachelor to master was not that easy. After a lot of fighting with course schedules the study coordinator from Animal Science and I created a small ‘premaster’ of in total 3 courses. I will follow these courses the same year as the research in Brazil to make the change from plants to animal more smooth. Two of these course are already finished. In the meantime, Filipe arranged that I could use the research as a master thesis, thanks Filipe.

Is it all about the song skills?

And so started the literature reading and thus pick out of a subject for my research on which I would study the bird on. Eventually, I figured it out and globally explained I will investigate whether the complexity of the song of both father and mother bird influences the reproduction success. What I expect is that the more complex the song of the father/mother bird is during the breeding process, the more young eventually fly out. Complexity of birdsong can be determined by the number of different syllables and the number of transitions between different syllables.

How am I going to research all this? Fieldwork of course! When I arrive in Florestal, the breeding season of the bird will be in full swing. From the team that is already in Brazil, I heard there are more nests in the study area than one may count. Good news. For fieldwork, I will record the song of father/mother bird per nest with a recorder and study the recordings on complexity. Beside that, I will, together with the team, measure much more things such as the weight of the eggs, the weight of the hatched young, the sound the young make in the nest, what the male is doing while singing and so on. 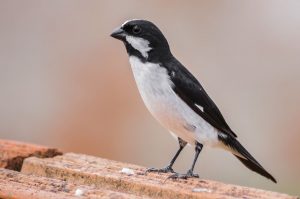 Funny to do a research concerning a bird, but about which bird are we talking? To be precise: the ‘witsterdikbekje’ in Dutch or Lined Seedeater in English or Sporophila lineola in Latin. It is a singing-bird the size of a sparrow that is very common in Brazil. To give you an idea, here’s a photo from shutterstock, but I’ll add pictures I took myself in the next blog!

At last I have to explain with whom I am going to do this project. Our team consists of about 10 Brazilians and 4 Dutch people. Leonardo Lopes and Filipe are the inventors and leaders of the project. The rest of the Brazilian people are probably bachelor students that each have their own research around the Lined Seedeater or they are going to help us. The other Dutch persons are Robert Benjamins (yes, he was also asked during the course Life History Evolution), Tessa van der Bemt and Yvonne van de Weetering. The coming three months I will try to write a blog every week to describe how the research is going and what happens beside a field experiment in Brasil. See you in the next blog!