#6 Return of the nests and the good weather

As you probably noticed, there was no blog last week. To be short, the weather was horrible, the birds would not sing and there were still no nests to be found. In order to complete our inability to do our research, a truck drove into the power lines and we were without electricity and internet for 24 hours. However, that we could not do our field work, did not mean we were hopelessly lost. Below, you will figure out what we did without power in the house.

Sometimes you have these moments of which you think: I’ll remember this when I’m ninety years old and reliving the best and craziest moments of life in my head.’ Well, this is one of them. Because we had no electricity at the house, my fellow Dutch teammates and I decided to find the famous ‘Rock’ on the campus; a place to relax accompanied by a great view. The fun thing was that we did not know how to get there at all! We simply chose out the tallest hill and started climbing through fields with cows and horses. As we Dutchies always carry the rain-curse with us, it started raining and mud-slipping was guaranteed. 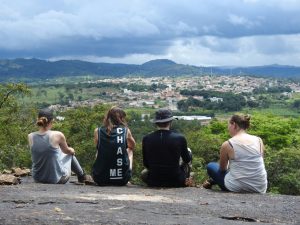 Somehow, with a lot of luck on our side, we managed to find the Rock still all in one piece and we were rewarded with indeed a good view. What we had not expected was a massive raincloud approaching us through the hills. Hiding was not possible, so here we were: laying on the rock and welcoming the toughest rain ever. With the river that was created on the rocks, we cleaned ourselves and our clothes of all the mud just to make them dirty again on our way back home. A great adventure!

Having no power on the whole campus site was a great experience. In the canteen, all the tables were decorated with candles. At night, we lit up some candles in our house as well and played games. I was secretly a bit disappointed when we figured out the next day that the power was back in the house. 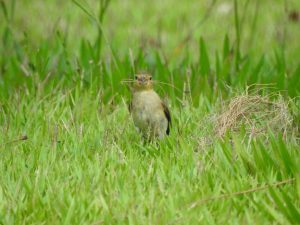 And as the power returned to the house, the rain and thunder started to disappear. Slowly the campus was filled by people walking with binoculars and spotting this small black-and white bird again better know as Lined Seedeater. Nest after nest was found and exactly as predicted: most of these nests had the status of ‘just being build’. I am very proud to mention that, in contrast with my two weeks-lasting search for my first nest, I found 8 nests this very week of the in total 15 found nests. This and next week, the first eggs will hatch and Yvonne, Robert and Tessa can start their research again.

With the good weather, my number of recordings started to increase again. Despite a bit of a battery problem (the recorder simply eats batteries which means I need 12 batteries per day to let my recorder function normally) I am satisfied with my number of recordings now. I only need more recordings of males singing during nestling-period (the period in which the eggs have hatched and the nestlings are in the nest), so in two weeks, I will probably record my last male. 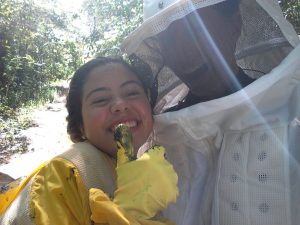 Laticia and I on our bee-adventure

This week, I was just about to end my day of recording when I met Leticia, a 16-years old high school student which I had talked with earlier this week during lunch. She told me she was going to do something with bees and asked if I wanted to come with her. Filled with curiosity, I followed her into a small house and she introduced me to some men. Together we walked to a small room and there they took a completely new beekeeper suit out of the package and gave it to me. Now it was clear what we were going to do. With the suit over our clothes, gloves on our hand and a temperature of 32˚C accompanying us, we walked into the forest. Leticia’s task was to put some glue-looking substance on the bottom of the beehives to prevent ants and other bugs to enter the hive. Apparently with this temperature, bees are very aggressive. Well, we experienced that. When we were in a range of approximately one meter from the hive, the whole net in front of my head was filled with bees which was incredibly awesome! This was a great spontaneous adventure and I will probably help Leticia more often when I have spare time.

Mist-netting in the woods 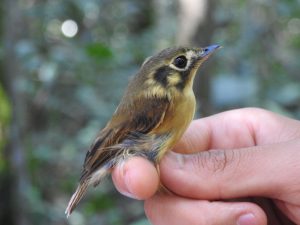 A very cute white-throated spadebill caught in the forest

Last Saturday we, four Brazilian team members and us Dutch people, went mist-netting in the forest to catch some birds we cannot catch in our normal fieldwork area. It was impressive to see our wall of mist-nets, but unfortunately the birds found it too impressive to be caught. During four hours we caught a disappointing total of four birds. I must admit I am not the biggest bird-fanatic (at least not as fanatic as Robert and Tessa), so during waiting I had my own expedition through the forest in which I observed plants and weird-looking spiders. All in all, it was a good morning!

As promised last week, I will tell something about Robert’s research this week. As you probably read in my first blogs, Robert’s research started long before he set foot on the Brazilian ground. Every day we had to wake up very early to put playbacks with predator or control sound close to nests (until some got stolen). These playbacks are important to imitate a predator and to change predator pressure around a nest. 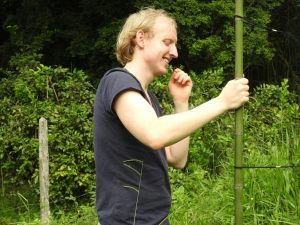 Robert in the field

The main question of Robert’s research is how parental behaviour changes as a consequence of increased predation pressure. In his research he focuses on three aspects while he increases the predation pressure by playing the playbacks; change in number and development of eggs and nestlings in the nest, change in parental behaviour during the nestling-phase and whether the nest is built in a more covered place when there are more predators around. In order to investigate these three aspects, he not only puts playbacks near nests, but also puts cameras in addition near the nest to observe parental behaviour and he counts the number of predators around the nest and notes down their location. Subsequently, in order to determine how well a nest is covered, he places a bright pink ball in an old nest and takes pictures from all sides. After, he calculates how much pink is visible on these pictures. This last action is, in my opinion, very cool. I am very interested in what the results of his research will be.

The coming weeks, a lot of plans are made. Wednesday, Leo will take us to Belo Horizonte and we will play tourist for one day there. Saturday, the carnival-week will start and our whole team will go to Belo Horizonte to watch this event and join the big party. After carnival, Leo (again) will take us to a national park where we will spend some days. He will guide us there and we hope to see more animal (especially bird) and plant species we have not seen before. Back at the house we will follow a taxidermy course given by Leo where we can set up dead birds which is very interesting! After this, my Dutch team members and I will go to the east-coast of Brazil to have a little holiday at the beach and another natural park which, of stories, sounds worth visiting.