A tomato flat: growing vegetables in the city

Urbanization is increasing worldwide. To supply the growing populations in cities with fresh vegetables, Wageningen horticultural specialists are conducting research into vertical farming. With this technique, crops are grown indoors year-round with the help of LED light and in layers on top of each other. Land and water use decline enormously, and pesticides and shipping over far distances are a thing of the past. The researchers are looking at how vertical farming can be more energy efficient, and the vegetables even more nutritious and tastier. Is a tomato flat a good idea?

Vertical farming takes place in buildings – the crops are grown on top of each other in several layers. “In a high-rise building – on a surface area about the size of a soccer field – you can grow enough vegetables for 100,000 people who each eat 250 grams of vegetables a day. You have complete control over the production process, so you are not dependent on the weather, the temperature, the daylight and the season. This makes vertical farming possible everywhere – also in infertile areas, in the desert or on Mars”, says Leo Marcelis, professor of Horticulture. 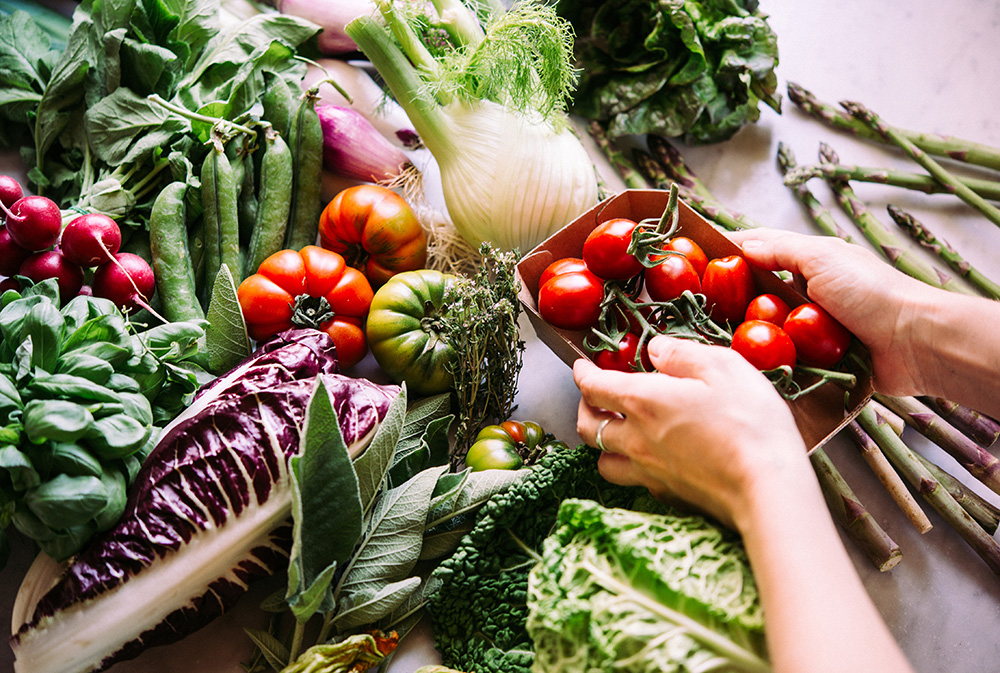 On a surface area about the size of a soccer field you can grow enough vegetables for 100,000 people who each eat 250 grams of vegetables a day, packed with fibre and vitamin C, and grown without contamination by pesticides or harmful microorganisms.

The world population is growing and increasingly clumping together in urban environments. At the same time, more people are becoming malnourished by a one-sided diet, or overfed by too much unhealthy food. It is therefore important to produce healthy and fresh food, preferably in the cities themselves. Vertical farming is ideal for that. “Vertical farming will not solve food shortages. It does not lend itself to rice and cereal production, but it is good for healthy, fresh vegetables, packed with fibre and vitamin C, and grown without contamination by pesticides or harmful microorganisms. That makes vertical farming one of the solutions to the global food issue”, says Marcelis.

“If we coordinate the amount, colour and duration of light from the LED lamps, the amount of water and the temperature and composition of the air very precisely, we can give the crops much more nutritional value. In addition, we can also improve taste and shelf life.”

Vertically grown vegetables can make do with much less water. “We can recycle all the water and recover most of the water that the plants evaporate. As a result, we only need two to four litres of water to grow a kilo of tomatoes, whereas we use 17 litres of water in a Dutch greenhouse and in theory at least 60 litres for soil cultivation in for example southern Europe, and in practice often 200 litres,” says Marcelis. In the closed cultivation system, nutrients such as nitrates and phosphates are also retained, while outside cultivation they end up in the soil, groundwater and surface water.

The use of pesticides is also a thing of the past, the professor emphasizes. “By ensuring high hygiene levels, we can prevent insects and diseases from entering the building with employees, materials, seeds or air.” The fact that the vegetables are not sprayed is good for our health, the environment and the preservation of plant and animal species. Moreover, thanks to local production, no shipping over long distances is required, which means that the CO2 footprint for transport is a lot smaller.

The vegetables are grown on multiple floors of a high-rise building without daylight using special LED lamps, which often emit purple or bright pink light. “Photosynthesis in plants is most efficient in red light, but it needs a bit of blue,” Marcelis explains. Sometimes white light is also used. But whatever the colour of the light, the plants sometimes need a break. “Just like animals, plants also have a 24-hour cycle, with a day and a night.”

Is LED light healthy for plants? Surely there is nothing better than sunlight? Marcelis is regularly asked that question. “If we adjust the amount, colour and duration of the light, the amount of water and the temperature and composition of the air very precisely, we can give the crops much more nutritional value. I am absolutely convinced of that; there is already evidence that these factors influence nutritional value. In addition, we can also improve taste and shelf life.”

However, vertical farming also has disadvantages, and that is mainly due to the relatively high energy consumption. “Even though LED lamps are economical, a quarter of the costs goes to energy consumption. If you can make substantial savings on this, the investment will become more affordable,” says Marcelis. Together with colleagues, he is studying options for reducing energy consumption. “We want to ensure that the light is used more efficiently by the plant. If we can optimize the temperature, humidity, concentration of carbon dioxide and availability of water and fertilizers and can determine the optimum intensity and colour of the light for every moment of the day, we can produce much more per unit of light,” says Marcelis. He also wants to improve the efficiency of climate control technologies. 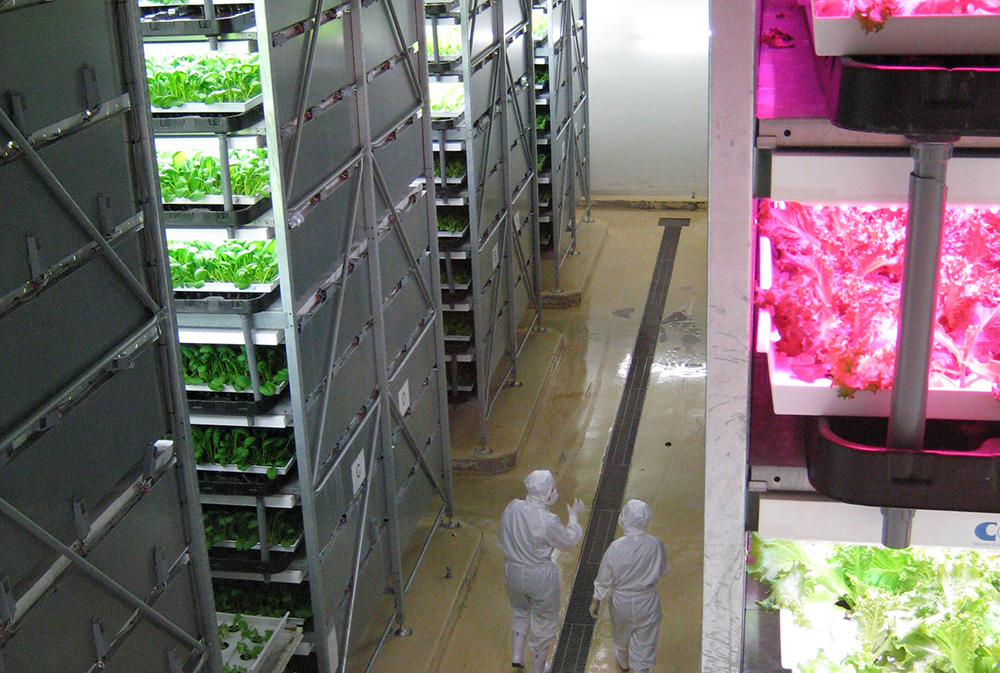 By ensuring high hygiene levels, we can prevent insects and diseases from entering the building with employees, materials, seeds or air.

The crops themselves can also be improved. Current crops have been bred for outdoor cultivation and greenhouse cultivation. “We can also breed crops for these indoor circumstances, but that is a long-term task. Plant breeding projects easily take ten years.” And finally, the buildings can also be made more energy efficient, for example by using the heat generated by the light for the heating of houses and offices.

The Netherlands Organization for Scientific Research (NWO) has awarded five million euros to Wageningen research into vertical farming. “Our greenhouse horticulture sector is leading and has a lot of technology and knowledge that the Netherlands exports worldwide, also in the field of vertical farming. That is why it is important that we stay ahead,” explains Marcelis.

Greenhouse cultivation is very efficient in the Netherlands and therefore much cheaper than vertical farming. In many places in the world, however, it is too cold in the winter or too hot in the summer to keep growing vegetables all year round. And sometimes there is simply not enough land available, for example in the city state of Singapore. Singapore, but also the US, countries from the Middle East and Japan, are interested in vertical farming, according to the professor. “In Japan, food safety has become very important since the Fukushima nuclear disaster, and vertical farming is very safe,” explains Marcelis.

It is difficult to predict how economically viable vertical farming will become in the future. “It is all very new and still has to prove itself.” Yet investment companies and companies such as Google, Amazon and IKEA have already invested hundreds of millions of euros in vertical farming, Marcelis continues. There is also growing interest in Europe and the number of companies focusing on vertical farming. And the consumer? “Ten years ago the idea still provoked quite a lot of negative emotions. That has changed; younger generations are now growing up with more technology. Vertical farming is increasingly appealing to consumers.”

Leo Marcelis specialises in greenhouse horticulture and vertical agriculture. “I have had a passion for plants from an early age. I grew up on a mixed farm and was always collecting seeds and growing plants. This is how my curiosity about plants arose; I wanted to understand how they grow and thrive. I really love the work I do.”