I visited the Japanese island of Okinawa because I was curious. People on this island, especially the older generations, are very small and challenge the deeply embedded but mistaken idea that tall is better by having one of the highest life expectancies in the world. I arrived late at my hostel and wasn’t expecting much of a welcome, but to my surprise I was warmly greeted by Mrs. Kuranari. She was indeed a small and energetic woman of an age that was impossible to estimate. Sixty? Eighty? One hundred and ten? While I was trying to figure out her age she rightfully assumed I’d be hungry and presented me with a delicious bowl of miso soup with oyster mushrooms and seaweed. She looked at me and seemed pleased with how delighted I was with the food and said: ‘Hara hachi bu.’ 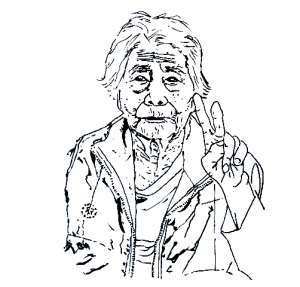 Don’t fill yourself up

I explained I didn’t speak Japanese but this didn’t seem to bother Mrs. Kuranari. In fact she had probably already expected it as she immediately placed two fingers of her right hand on her left arm and took five small finger-steps forward. 1, 2, 3, 4, 5. And then she took one step back and took that imaginary fifth step between her thumb and index finger and presented it to me. In a reflex, or perhaps because I was trying to be polite, I reached out to receive her invisible present and without any hesitation she pushed her fingers into the palm of my hand. It was a funny situation and both of us seemed to rather enjoy this short moment of intimacy. Although I didn’t realise it at the time, less than one hour after my arrival Okinawa had already revealed its greatest secret to me. Later that night, wide-awake from jet leg, I looked up the meaning of hara hachi bu. It means eat until you are 80% full. Don’t fill yourself up but eat until you’re not hungry anymore. Leave a bit of space. That’s what Mrs. Kuranari had explained to me so elegantly, finger-walking up and down her arm. 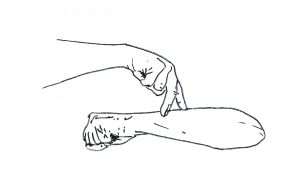 Shrinking out of trouble

Although it took time for the essence of this deceptively simple advice to fully manifest itself to, I now consider it to capture precisely why for many years I’ve been interested in the concept of shrinking. If we are to create positive change we need to create the space and time to do so. Unfortunately the culture of taking a step back is at odds with most current economic, societal and scientific modes of operation. Humanity has a deeply rooted tendency to tackle challenges by trying to grow out of trouble. It’s the business model. We develop new products, new services, new methods, and scientific innovations, that allow us to temporarily overcome the acute challenges to our model. In the process the fundamental paradox of growth towards scarcity remains firmly in place while the complexity of our challenges increases.

Science journalist Debra McKenzie writes: “It appears that once a society develops beyond a certain level of complexity it becomes increasingly fragile. Eventually, it reaches a point at which even a relatively minor disturbance can bring everything crashing down. To keep growing, societies must keep solving problems as they arise. Yet each problem solved means more complexity.”

Hara hachi bu, reducing our needs by 20%, translates such daunting words into practical action. Hara hachi bu invites us to look at what 80% means in regards to other aspects of our lives. Perhaps we work four instead of five days. Perhaps we take the train instead of the car. Perhaps we eat less meat and more plant-based protein. Each action leaves us with 20% more wiggle room. Space to practise and embrace change, space to rest, heal and reflect, time for family and community, time for the planet to recover from times less mature. Hara hachi bu creates space to re-adjust our direction as an individual, as members of families and collectives and, in the end, as members of a species. Who will we become? Who do we want to become?

Hara hachi bu is a cultural exercise in shrinking as a way of life, and comes with full benefits. Not only are the elderly people of Okinawa smaller and less needy, but they are also healthier than most. Nowhere will you find more super-centenarians, people of over 110 years old. In fact Mrs. Kuranari ended up inviting me to a dance and confided in me that she was 93 years old. The space they’ve created is filled with enormous quality of life. Taking a 20% step back allows the remaining 80% to fully blossom. I can’t help but wonder what might happen in the space between art and science if both disciplines take a step back and invite the other in. 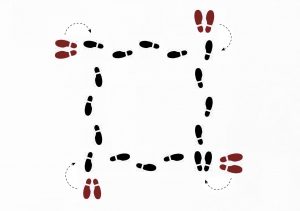