Rhinos in Africa are killed for their valuable horns on a daily basis. Scientists from Wageningen University & Research are currently running tests in which they fit ungulates such as zebras and wildebeests with GPS transmitters. Restlessness and flight behaviour in these ungulates appears to warn for the presence of poachers. In the future, a smart computer system will collect these signals and alert the park rangers. Which technology would you like to use for nature conservation?

Ecologists from Wageningen University & Research (WUR) are investigating a new method to protect rhinos in African wildlife parks. Rhino horns are considered a status symbol and are used in traditional medicine in Asian countries such as China and Vietnam. They are worth more than gold or cocaine. As a result of this, rhinos are now faced with extinction. There are still around 25,000 white and black rhinos living in Africa, 80 per cent of which are found in South Africa. In this country alone, an average of three rhinos are killed by poachers every day. Wildlife parks such as the Kruger National Park try to deter poachers with drones and smart fences and a heavy deployment of the army. Yet, these measures have not been effective enough to protect the rhinos. 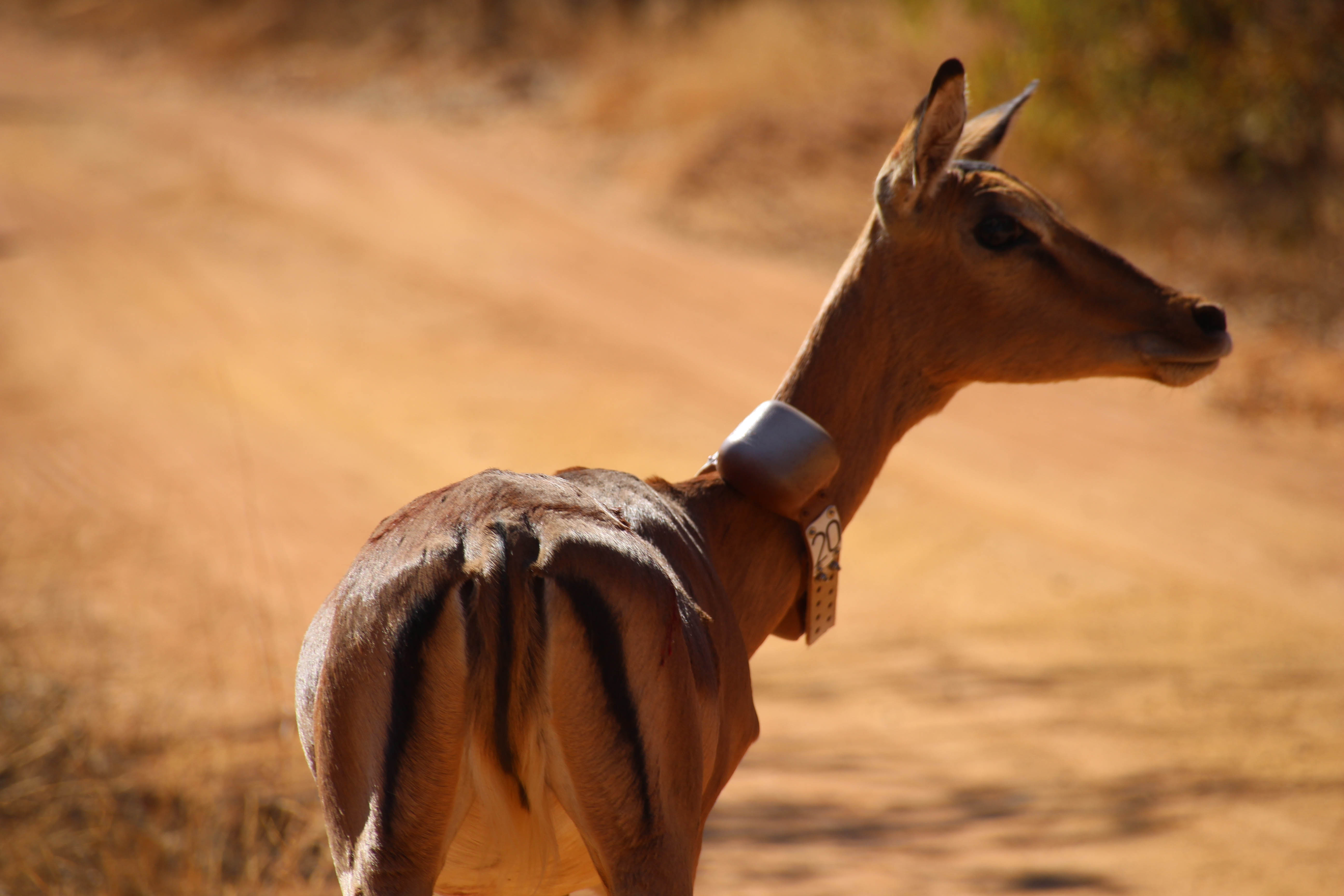 WUR scientists from the Resource Ecology Group came up with the idea to fit zebras, impalas and wildebeests with GPS transmitters. The idea was that the restlessness and sudden flight movements of the ever-vigilant ungulates could reveal the presence of poachers. The energy-efficient transmitters are located in collars and record the movements and location of the animals. A yet-to-be-built digital warning system will collect the signals and transmit them instantly, in real time. If any irregularities occur, the system will sound an alarm that the park rangers can respond to immediately. While this is still a future scenario, the first research results have proven promising.

“ We fitted zebras, impalas and wildebeests with GPS trackers and collected a great deal of data. In nearly 90 per cent of cases, the behaviour of the ungulates warned for the presence and the location of poachers.”

In spring 2018, the first test was conducted in a small section of a wildlife park in Africa. ‘A team pretended to be poachers and collected a great deal of data. In nearly 90 per cent of cases, the behaviour of the ungulates warned for the presence and the location of poachers,’ says Frank van Langevelde, Associate Professor at Wageningen University & Research. As this small wildlife park did not have any predators living within its borders, a new study will be conducted this year in a nature reserve that is home to lions and hyenas. These predators will also be fitted with transmitters. ‘We expect that ungulates will react differently to poachers than predators and we want to study these different responses,’ explains Van Langevelde.

In 2020, the researchers will test the new method throughout the entire South African wildlife park where the first test was conducted. ‘As we’ll need to fit many more animals with transmitters for this test, it is important to develop cheap transmitters that are easy to fit,’ emphasises Van Langevelde. The research into SmartParks is supported by a consortium of businesses and land owners in South Africa who want to further develop the method and make it widely available. As the areas that need to be covered are vast and there is often little money available for nature conservation, especially in the poorer African countries, the system needs to be as cheap and robust as possible.

Van Langevelde has been researching nature management in African wildlife parks for several years. ‘Luckily I’ve never been confronted with a poached rhino before, as it’s a truly horrific sight.’ New methods are not effective enough in protecting the animals. Drones break down quickly and their large-scale deployment is often prohibited by law. A technology race with poachers has emerged around the smart fences that are fitted with sensors that sound a warning when people cross the boundary, as they inventively try to find their way through these fences. ‘Fitting ungulates such as zebras and wildebeests with transmitters has certain advantages as poachers can’t do much to prevent the animals’ reactions to their presence. In large wildlife areas, poachers are not present often enough for the animals to get used to them,’ explains Van Langevelde.

The wildlife park where the first test was conducted rarely has to deal with poachers attempting to enter the park anymore. ‘Making it known that you are working on a new system might already have a deterring impact.’ Unfortunately, this does mean that poachers are simply focusing their attention on other parks. Despite all these efforts, according to Van Langevelde the only real solution to poaching is to ensure that the demand for rhino horn decreases. ‘Until that time we need to protect the last remaining rhinos as effectively as possible and technology can help us to do so. Perhaps we might not need to use transmitters in the future, and we will be able to monitor the animals from a Zeppelin or satellite.’

What will nature management and conservation and nature research look like in the future? More and more new technologies are becoming available: from smart computer systems, drones and satellite images to camera traps, sensors and DNA analyses. These tools help researchers to collect data that was previously unimaginable. Nature management with smart technology is the theme of the 101st anniversary celebrations of Wageningen University & Research on 11 March 2019.

Read more about the protection of the rhino:

Frank van Langevelde's research focuses primarily on the ecological and evolutionary adaptation of animals to stress caused by, for example, disease, food shortages, predators and humans. ‘I initially want to understand how nature works and I'm curious about the processes that take place in nature. At the same time, I understand the importance of nature and its conservation and management.’