Can we justify using animals as organ donors?

Recently, a pig kidney was temporarily connected to a human, and the first transplants of pig hearts in cardiac patients are on the way. Can we justify keeping animals and genetically modifying them for organ harvesting? For example, donor pigs must live a sterile life and cannot behave naturally. Wageningen philosophers will consider the ethical questions and look at how we can take the animal’s interests into account. Is it acceptable to further use animals as instruments for human purposes? What do you think about the moral component of using donor animals?

“Imagine that aliens from another planet have landed on Earth, and that they are more intelligent than humans. Also suppose that they are genetically manipulating humans and using them to grow donor organs for themselves. Are we okay with this?”

A participant in a debate about donor animals proposed this thought experiment. Humans are using animals as organ donors more and more. In October, American physicians temporarily connected a genetically modified pig kidney to a brain-dead patient. Artificial hearts and biological heart valves include bovine cells to reduce the risk posed by coagulation and the immune response. German researchers hope to be able to transplant a modified pig heart into a human within the next few years. Researchers are also studying how they can use animals to grow human cells into organs.

From safety to ethics

“Donor animal” is actually an incorrect term, in the opinion of animal ethicist Bernice Bovenkerk. She is concerned with the relationship between humans and animals. “We use these animals against their will. They do not have a choice.” Medical technology development is accelerating, but the question is whether keeping and genetically manipulating animals to grow cells and organs can actually be justified. “There was a discussion about xenotransplantation about 20 years ago, but that mainly focused on patient safety and the risks of diseases that transfer from animals to humans.”

“This is the time to consider whether we want to harvest organs from animals. Otherwise, the technological options will overtake the ethics.”

Now there is more attention to animal ethics. “Our society is gradually starting to think differently about animals. People are more aware of the intrinsic value of the animal him- or herself, and do not feel that we have the right to do whatever we want. The social outrage and commotion about things like malpractice in slaughterhouses illustrates this.”

In intensive livestock farming, we kill animals so we can consume their meat, milk, or eggs. This is morally questionable, but Bovenkerk says that the animals that are kept for organ cultivation are possibly even worse off. “They must live in a completely sterile environment without pathogens, in which they probably do not have contact with others of their species and cannot display natural behaviour. This can have a very negative impact on animal welfare.”

Bovenkerk says that the genetic modification of donor animals also makes them more like resources. “Animals are made even more ‘object-like’. Of course, this already happens in livestock farming, but we cross this line even further when we raise animals for organs. In that case, we genetically modify the animals to specifically serve as a reservoir with spare parts for us.” 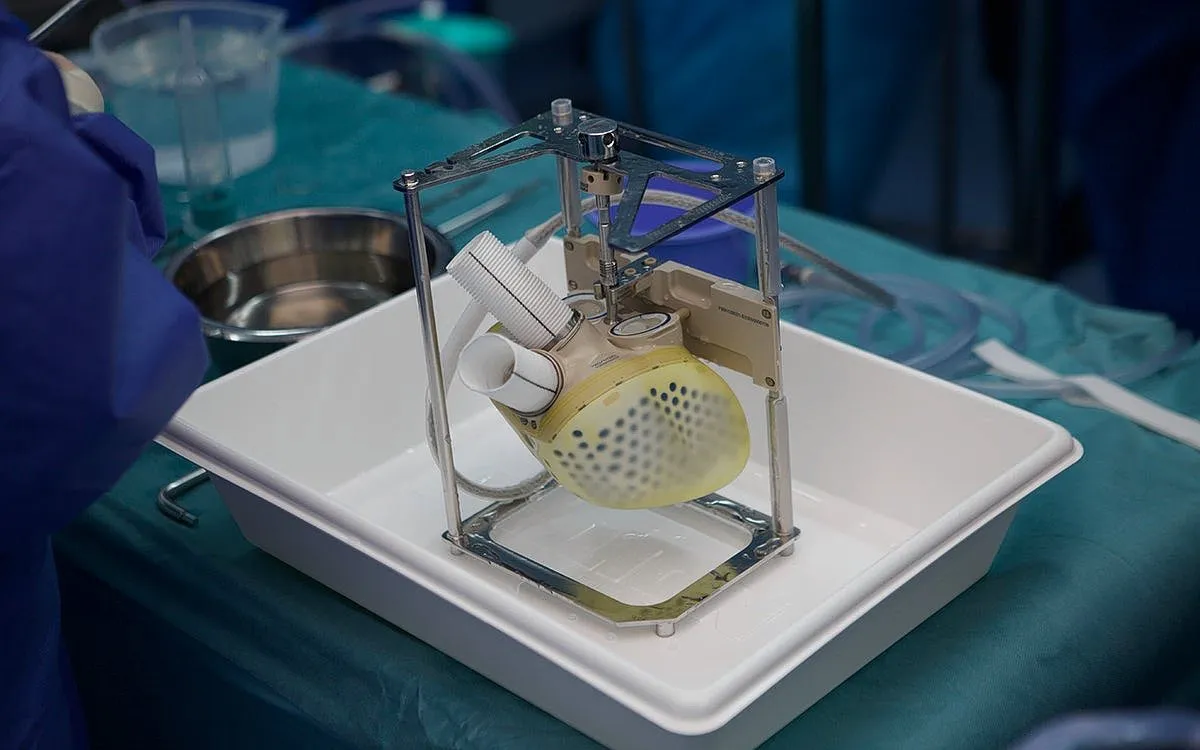 An artificial heart with bovine cells.

In animal ethics, there are scholars who consider the interests of the animals and those who assign individual rights to animals. Bovenkerk favours a combination. “Personally, I want to assign rights to individual animals, based on their interests. That also means that you cannot use them as a resource for achieving your own objectives.

Animals are living and sentient beings with their own interests and objectives. These include the will to survive, to eat and drink, to have contact with others of the same species and procreate, to have a suitable living area or territory, and to display natural behaviour. “Animals have needs and desires, just like us. They have a social life and also experience pleasure, frustration, and pain.”

As people, we put ourselves above animals, but how justified is this? “As people, we can write a book, think about life, and plan ahead. Some animal species can also do the latter, and at the same time, there are people who cannot do this, such as babies and people with dementia. Yet, these people count in our moral community. So why are animals not included?”

Research indicates that it is becoming increasingly clear that many animal species have different types of intelligence that we cannot easily comprehend or follow, or conversely, have forms of intelligence that are like ours. Some animals, such as dolphins, have a language and call each other by name. Some species are inventive, creative, or even show altruistic behaviour.

“We take human characteristics as the standard, and do not value animal characteristics the same way. There are differences, but that does not mean that animals are less valuable from a moral point of view.” Excluding animals based on species is “species-ism”. “That is a type of discrimination, like racism,” says Bovenkerk. “It shows how our anthropocentric or human-focused world view colours our thinking. There is no neutral vantage point from which we can determine that the life of a human is more valuable than the life of a cow or pig. For that reason, it is important to have a debate about organ cultivation for humans in animals.”

Point of no return

Bovenkerk warns that this is the time to think about whether we want to continue this development, as medical-technological possibilities will overtake ethics otherwise. This includes applications such as IVF and prenatal diagnostics that make it possible to intervene and select. “These types of technologies pose new moral dilemmas that we did not have before these options existed,” she explains.

“We do something because we can. In our society we think: doing research is always good, and we’ll see what happens next. However, research cannot always be separated from application. Once so much time, money, and energy has been spent on something, you usually reach a point of no return. Perhaps it would be better if we used all that money and energy to help people with organ failure now and to prevent illness.”

“Humans & Animals” Series of Debates in the Rode Hoed
Debate Centre the Rode Hoed in Amsterdam and Wageningen University & Research are organising a series of debates with the theme of Humans and Animals. Do animals have interests, and how do they relate to the interests of humans? In this series, we will unravel the latest scientific and ethical insights, and we will engage in discussion with those in the field.
Edition 1: 1 November 2021 | Responsibility of humans for animals
Edition 2: 18 January | Zoonoses – how can we stop the next outbreak?
Edition 3: date to be confirmed | The future of our meat

Finally, we could consider whether it is justified to use animals as solutions for problems that we have created ourselves, as a result of our technological development. “Our fear of death leads to the development of new technologies and associated ethical questions. Illness and death are part of life, and it appears that we find it difficult to accept that, although I, personally, would probably also be inclined to accept a donor organ from an animal for a loved one, if there weren’t any alternatives.”

However, Bovenkerk explains that there are alternatives. This includes improving the current system of organ donation, repairing damage to existing donor organs, and doing more research into cultivation of organs in the lab, which is still in the very early stages. “When more is invested in research into organ cultivation, then the technology will develop more quickly. If we prohibit the use of donor animals, then the necessity to find alternatives will also be more urgent.”

After her Master’s in Philosophy with a specialisation in environmental philosophy at the University of Amsterdam, Bernice Bovenkerk received her PhD from the University of Melbourne in Australia. At the same time, she worked at Utrecht University where she was lecturing and she specialised further in animal ethics. In 2013, Bovenkerk joined the Philosophy chair group in Wageningen. She has been associate professor since 2019. At the moment, she is conducting research into anthropocene ethics, with a VIDI grant from the Netherlands Organisation for Scientific Research (NWO). “I have the same motivation as many students in Wageningen, and that is to make the world a better place. I really love animals and I am interested in their experience. But I’m not one for exact sciences, so I chose not to study biology. With my work, I want to contribute to a more equal relationship between humans and other animals.”