Refugees often seek shelter in areas already struggling to cope with poverty and scarcity of water and food. Wageningen researchers, companies and organisations collaborate to find circular solutions to improve the living conditions of refugees and the host population. In Uganda, for instance, where trees are felled for cooking fires. Reforestation is only possible once an alternative is available such as solar-powered stoves. Dutch companies and scientists working on this issue, is that a good thing?

“Extensive deforestation is taking place in Uganda,” says Bertram de Rooij, landscape architect and researcher at Wageningen University & Research. “Almost half of the country’s forests were chopped down in the past decade. A tremendous loss. It’s not just the loss of natural riches, but this large-scale deforestation also affects agriculture and climate resilience,” according to De Rooij. In Uganda, the local population and refugees use timber for cooking. Furthermore, the refugees are allocated a small patch of arable land. But this land is quickly depleted, prompting a need for more land. “It’s a vicious circle. Reforestation is not an option until the other issues are solved,” explains De Rooij. 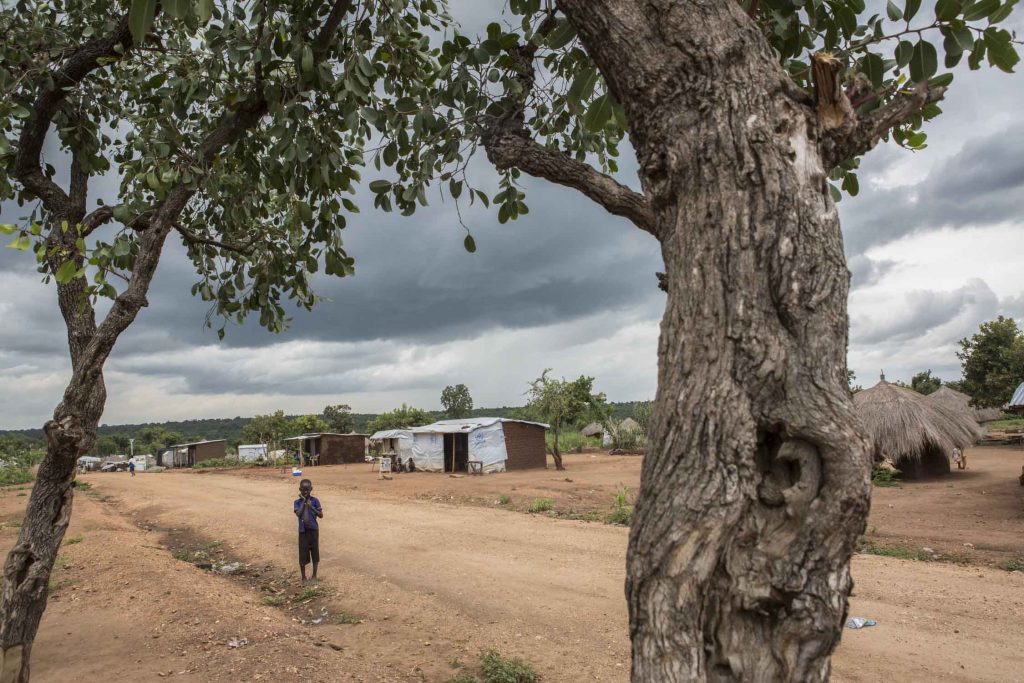 A boy stands by the roadside in the Bidi Bidi refugee camp in Uganda. Photo: EU/ECHO/Edward Echwalu

De Rooij and his colleagues, several Dutch companies and other organisations have now joined forces to develop partial solutions. One company, for instance, may supply solar-powered stoves, eliminating the need for wood as a medium for cooking. Another organisation may develop training courses to educate people on essential knowledge and skills needed for farming. Additionally, partners are helping with reforestation and afforestation.

Currently, almost 71 million people have been displaced as a result of wars and lengthy armed conflicts, natural disasters, famine and extreme poverty. Of this number, some 26 million have migrated to other countries. “Four out of five refugees are sheltered in countries in their region, mostly in areas already facing major challenges such as drought or infertile land”, says De Rooij. Often, refugee camps evolve into semi-permanent settlements with an economy of their own. The local population may live in extreme poverty, which results in conflicts between them and the refugees over scarce water supplies or plots of arable land, for example. Furthermore, the demands placed on natural resources such as water, flora and land may be so heavy that an ecological disaster ensues.

“Dutch companies and locally operating NGOs often have a lot of expertise that could help make the living circumstances of both refugees and the host population better and more sustainable. When you approach issues through circularity, you can really make a difference.”

In an effort to improve living conditions in the refugee camps and surrounding regions, non-governmental organisations (NGOs) and Dutch companies have joined forces. An example cited by De Rooij is a company that produces miniature factories capable of recycling waste into building materials. NGOs active in the regions are eager to collaborate. “Charity organisations often struggle with sustainability issues. Having companies involved can alleviate this.” 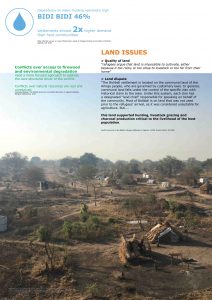 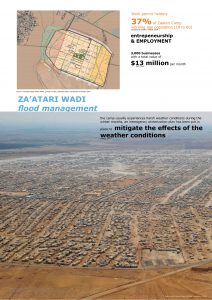 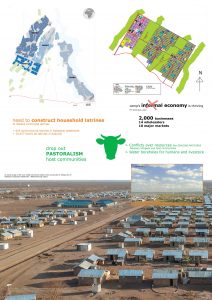 Image above: excerpts from the factsheets on Uganda, Jordan and Kenya

Linking the various problems makes the solution circular. “When issues are faced with a circular approach, you can really make a difference.” Previously, De Rooij studied options to make refugee camps greener and more sustainable. In 2019 he embarked on a follow-up study on circular solutions for refugee camps and their environment, under the research programme Circular and climate-neutral society and in collaboration with NLworks.

To this end, he made infographics to provide clarified information on land use, energy and water (see factsheets below). “There is a surprising amount of information available globally. However, it is scattered. We have combined this information. Besides, we study what actual issues are relevant in which regions, and where they are related”, the researcher explains.

Jordan, for example, struggles with different issues than Uganda. Many Syrians have fled to Jordan, where one in three inhabitants is now a refugee. They are located primarily in the country’s urban northwestern region. De Rooij: “Jordan is very active in the area of solar energy, but they have a shortage of water. The country currently imports water. Still, there are excellent opportunities for saving, recycling, and reclaiming water.” Unnecessarily large amounts of water are wasted as a result of the farming methods and leakages in the water system. When the rain finally falls, floods occur. “This rainwater can be collected. Also, wastewater can be purified and reused.”

“Dutch companies have the circular expertise to improve the conditions for both the refugees and host population and to make their living conditions more sustainable”, De Rooij states. At this stage, scientific research is vital. “There are many knowledge questions. What is needed locally for reforestation? What are the costs and advantages of circular concepts? If one of the partial solutions fails, will that impact the entire solution?”, he exemplifies. “We also want to study cultural aspects of circularity. How do people feel about things like reusing wastewater and applying human faeces as fertiliser for farming soils?” 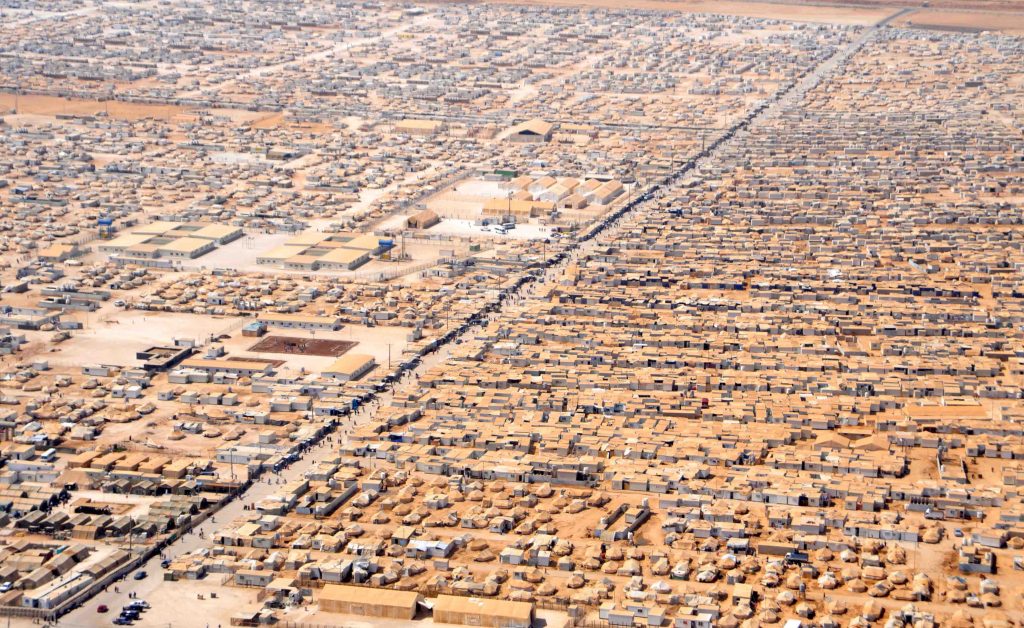 Aerial view of the Za’atri refugee camp in Jordan for Syrian refugees. Photo: US State Department

The companies and NGOs involved have formed five consortia, each with a different theme. One consortium focusses on improving the lives of inhabitants of slums through affordable and straightforward technology such as green roofing and solar panels. “This is done in a very small-scale manner”, De Rooij notes. Other consortia focus on reusing water and waste for food and usable products. “This year, we will collaborate with NLworks and RVO in further studies in and around the camps. We will talk to local stakeholders and take a detailed look at the local circumstances. A lot of ideas have already popped up during the preparations. After the exploratory phase, we will take concrete steps with the local population and the refugees”, says De Rooij.

After his study in Landscaping Architecture in Wageningen, Bertram de Rooij worked with several design agencies. Following this, he worked as a chief designer in regional development with the Government Service for Sustainable Rural Development (DLG). When this service was abolished in 2014, De Rooij joined Wageningen Environmental Research. <br />
“My work focusses on various topics such as climate adaptation, regional development and regional food systems. It is a challenge to link expertise and to make it applicable in a spatial context. My passion is in collaborating to design landscapes that reflect the needs of the community, and that unite.”