Drones deployed for a richer nature

Despite the efforts many farmers make to keep their meadows hospitable, pasture birds experience difficulties in the Netherlands. Wageningen researchers developed a method to determine what the birds need (such as whether or not to mow the grass) using drone images and self-learning image recognition software. Moreover, ecologists deploy drones to study how insects detect flowers and plan their route and to inspect fields of eelgrass and mussel beds. Thus, technology and biodiversity go hand in hand.

Drones offer abundant possibilities to map the dispersion and growth of plants as well as the routes and behaviour of animals. Carrying out these observations with the naked eye is time and energy-consuming. Moreover, drones can be equipped with cameras capable of recording things the human eye cannot even see.

A grass field with buttercups, captured by a drone. On the left is the field as seen by humans, in the middle is an infrared image, and on the right is an ultraviolet image, as an insect would see the field. Images: Plant Ecology and Nature Conservation Group, WUR.

In the South of Limburg, a research project is underway as part of the European Showcase Programme. In this project, Wageningen researchers study how insects observe flowers. This may help combat large-scale mortality among insects. Insects see the ultraviolet part of the light spectrum, so the drone records images of the meadows using a UV camera. Flowers are clearly visible in the UV spectrum. ‘This allows researchers to better understand how insects move through grassland and what flowers they prefer’, says Lammert Kooistra, associate professor of Remote Sensing with drones.

Remote sensing is observing and recording images of the earth’s surface from a distance, Kooistra explains. This may encompass large areas, such as is done by satellites, or smaller areas by drones. The first satellite images became available at the start of the seventies. ‘With a pixel size of 30 x 30 metres, reasonably detailed. But, since about a decade, there are drone platforms available with a stunning level of detail, accurate to a centimetre or even millimetre.’

“We need more knowledge on plants, and the technological developments offer us access to this knowledge.”

While the use of satellite images is limited to the time upon which the satellite is above the desired part of our planet, drones offer more flexibility. Especially as satellite imaging is impacted by cloud cover. ‘Drones fly at much lower altitudes and are capable of recording, for example, the development of vegetation.’

Drones are extremely useful in recognising animals and plants and monitoring their development. Not only for researchers but also for nature managers and farmers. ‘Farmers involved in meadow bird management sometimes have trouble knowing whether their efforts to make their meadows more hospitable for birds are successful. The areas are too large and not all that accessible. Drones can help. There are already some commercial businesses that offer drone services to spot pasture birds’ nests.’

In a project on aerial grassland surveillance, Wageningen researchers flew a drone capable of recording multispectral images over peat meadows while ecologists on the ground inspected the state of the meadow. By linking the data, a method of automatic recognition can be developed to support farmers in their efforts for meadow bird protection. Thus, they can see what measures are needed, such as mowing, removing grass, or adding manure. 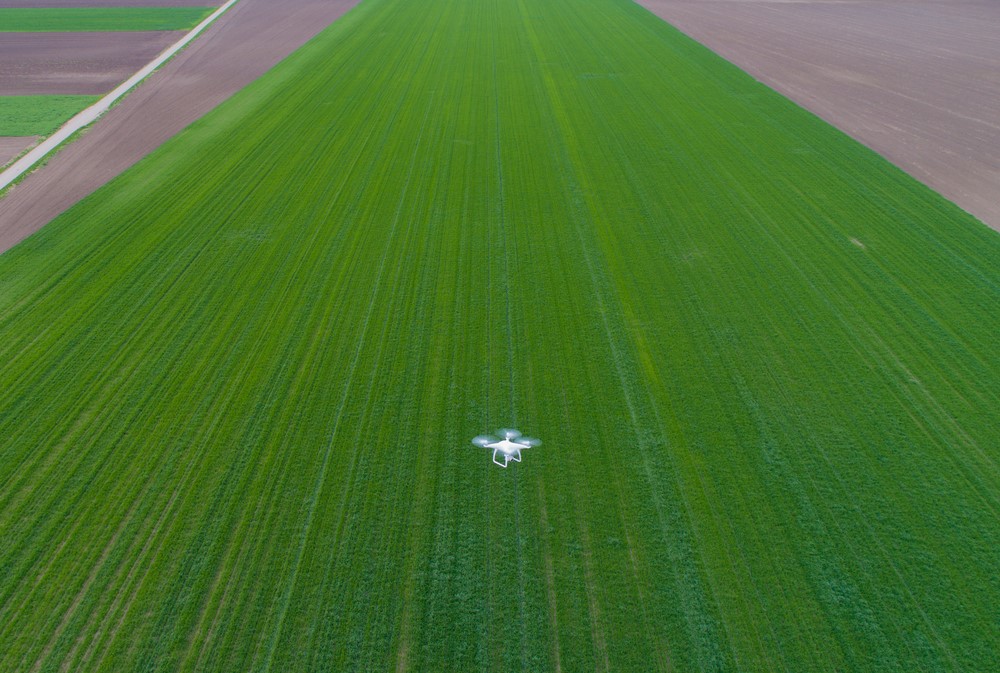 Drones are extremely useful in recognising animals and plants and monitoring their development, not only for researchers but also for nature managers and farmers. Photo: Shutterstock.

‘There is an entire world behind getting from the images to relevant information.’  It all starts with the camera images. These images, usually photographs as these provide the greatest level of detail, are then processed. Software programmes can learn how to do this automatically. This is known as machine learning. First, you enter data to train the programme to recognise images.’ The software is thus able to discern between forest, pastures and fields, and the types of trees and plants, their density and the number of layers of foliage. The data must be of adequate quality, Kooistra points out. ‘Knowledge of classification methods and of the ecosystem is needed. Fieldwork by ecologists to gather suitable training data remains essential.’

In Wageningen, there is a multidisciplinary team of researchers that are specialised in drone methods, image processing and machine learning. The team is called Unmanned Aerial Remote Sensing Facility (UARSF), and its members come from different research and chair groups.

Kooistra and his colleague Sander Mücher were the initiators of this team in 2012.  Wageningen University & Research had just acquired its first drone, an octocopter aptly named Okkie. ‘We saw the technology developing, and a drone is a huge investment. Therefore, we thought it necessary to collate the available technical and substantive knowledge and make it available for all research and chair groups.’

The scientists now have over twenty drone platforms at their disposal, the heaviest of which weighs 25 kilogrammes. In order to fly these safely, there are twelve certified drone pilots, Kooistra among them. The Unifarm drone pilots can be commissioned to conduct drone flights for researchers.

Whenever colleagues within the university and research groups wish to deploy drones in their research, the drone team can advise what combination of drones and cameras is best, as well as what method of data gathering and image analysis is the most suitable. ‘The more detailed the images must be, the lower and slower the drone must fly. GPS is used to have the drone follow a pre-determined path.

Although researchers increasingly use drones to conduct readings with cameras and sensors, the standard methods are still under development. ‘Each time, we must decide what approach is best for a certain study in a certain area. We hope to standardise this in the future.’

Drones are used with increasing frequency for a variety of studies on natural systems. In a study on mussel beds, for example, and in research for Rijkswaterstaat on changes in the distribution of eelgrass in Zeeland. Eelgrass fields are an important habitat for all types of marine animals, as well as storing sediment, which is vital in protecting the coast. ‘The drone recorded images when the eelgrass lay dry. This required some planning, as the weather had to be nice during low tide, and the Rijkswaterstaat boat needed to be available.’ 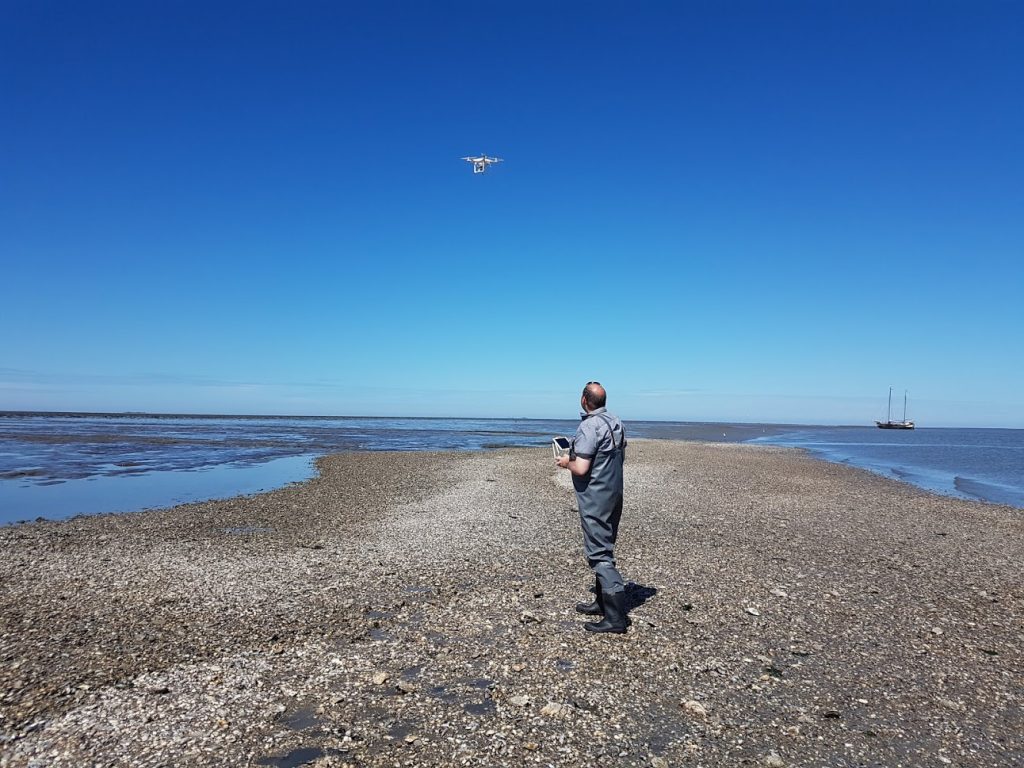 Aerial images are instrumental in studying plant systems in the wild as well as in agricultural areas. Kooistra was previously involved in a study on plant growth and soils. There is increased focus on biodiversity in agriculture, for example, in strip cropping. ‘The Colorado potato beetle is a plague insect. We used drone images and machine learning to count the Colorado potato beetles and monitor their dispersion in potato strips. These strips are positioned in between other crops. Thus, we can compare and see what crop combinations slow the spread of the insect. Here, biodiversity helps agriculture.’

Kooistra sees many opportunities to apply remote sensing with drones in daily practice, including in organisations and businesses. ‘We often think technology removes us further from nature. But, technology can also be a useful addition in helping us make better decisions in nature management and sustainable production.’

During his master’s Soil, Water, Atmosphere, Lammert Kooistra specialised in remote sensing and geo-information systems (GIS). He went on to obtain his PhD on a study on detecting heavy metals in the flood plains using satellite images. He obtained his PhD at Radboud University. He started working as a researcher at Alterra, currently known as Wageningen Environmental Research, in 2002. In 2005 he became an assistant professor at the laboratory for Geoinformation Science and Remote Sensing. Since 2016 he is an associate professor. “In a Suske & Wiske comic (a well-known Dutch and Belgian comic series, ed.), professor Barabas discovers the sound tap, allowing him to communicate with plants. For nature to flourish and produce more food sustainably, I want to understand when a plant feels at ease in its environment. This requires more knowledge on plants, and the technological developments offer us access to this knowledge.’