The Dutch horticultural sector aims to be climate-neutral in 2040. Thus, Wageningen researchers have built a low-emission demo-greenhouse for the cultivation of vegetables, fruit and flowers in an effort to find ways to reduce CO2 emissions as well as the use of crop protection agents and artificial fertilisers to zero. Plagues and diseases are tackled biologically, and the energy-efficient greenhouse reuses water and nutrients as much as possible. This leads to cleaner cultivation as well as improved yield.

In the demo-greenhouse KAS2030, situated in Bleiswijk, Wageningen researchers are currently growing strawberries, the houseplant anthurium and the flowers gerbera and freesia. Especially freesia is a popular flower in bridal arrangements. “Every two to three weeks, horticulturists visit to take a look and discuss our progress. The demo-greenhouse offers us the opportunity to experiment in ways that are impossible in actual practice. Through understanding what is required for emission-free cultivation, we can help the horticultural sector advance,” says Frank Kempkes, researcher Energy and Greenhouse Climate.

Dutch horticulturalists sorely need this help since the sector has agreed to be fully CO2-neutral by the year 2040. The CO2-emissions produced by the sector totalled 5.7 megatonnes in 2017, which they aim to reduce to 2.2 megatonnes of CO2by 2030.

“The demonstration greenhouse allows us to try things out. When we have a better understanding of what is required for emission-free cultivation, we can help the horticultural sector advance.”

Reducing energy usage is key in creating a climate-neutral greenhouse. In the winter, heating is generated through the use of natural gas, just as in houses, and this produces CO2-emissions. Better insulation can contribute to lower energy use, but this can cause unwanted levels of humidity. “Plants will always evaporate, so we must take measures to stop fungi from taking over. The plants in the demo-greenhouse are cultivated at relatively low temperatures. In combination with the improved isolation, this makes it more challenging to dehumidify the greenhouse; which consumes a lot of energy. For this reason, we maintain a higher temperature in the winter, while using special installations to extract moisture from the air. With these dehumidification installations, we reclaim heat at the same time,” Kempkes explains. In the summer the greenhouse is open and there is little or no heating. 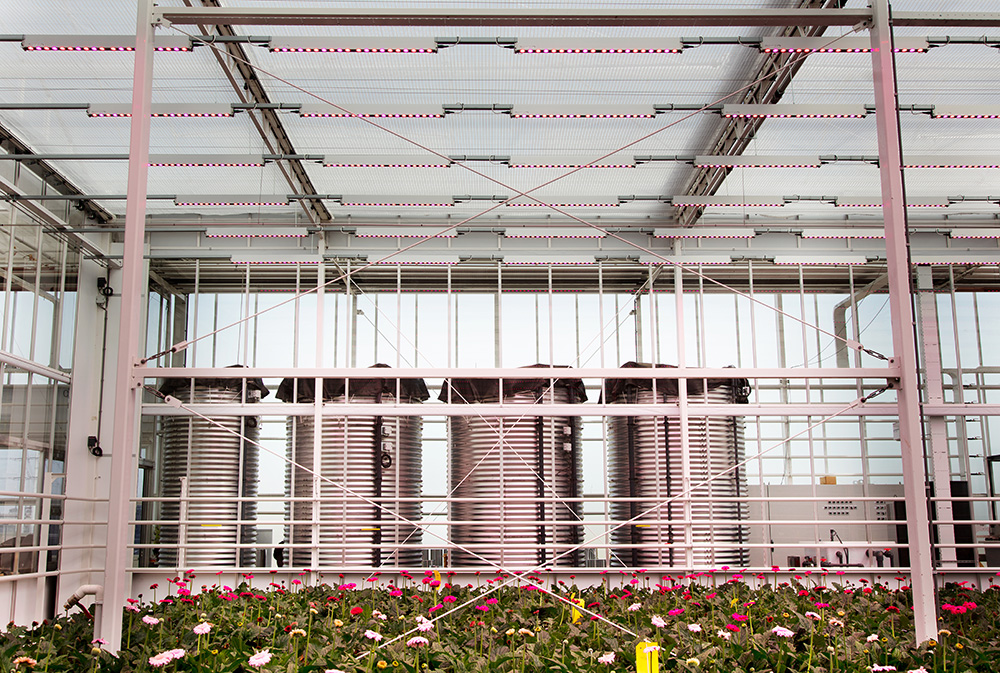 The fact that an increasing number of horticulturalists are now using alternative sources of heating such as geothermal heat or a heat pump rather than heating with natural gas is reason to rejoice, according to Kempkes. A heat pump also heats the demo-greenhouse. “But even an energy-efficient greenhouse still needs heating. In the future, this heat will be obtained from renewable energy sources instead of fossil fuel.” The researcher stresses that the possibilities of storing the energy generated by the greenhouse as a solar collector, are expected to increase in the future. He is researching how the energy generated in the summer can be collected and stored. Energy is currently stored in a layer of groundwater. “In the summer, it is usually possible to harvest sufficient energy to get through the winter.”

Another way to minimalise energy usage it to intensify the cultivation. “Through technical innovations, we can generate a larger harvest using the same resources. This motivates horticulturalists to invest in improved greenhouses.” Traditionally, for example, rows of strawberry plants are placed sufficiently far apart for a person to move in between them, explains Kempkes. “An intelligent system that lifts rows of plants individually allows us to increase the number of plants by 20 per cent in the same space.” Light-loving gerberas are provided with light from LED lamps during the winter. Unlike the previous generation of lighting, LED’s do not generate as much heat, preventing the temperature from rising above desired levels. “This leads to a continuous harvest, allowing businesses to employ a stable and experienced workforce, which contributes to the quality of the product.” 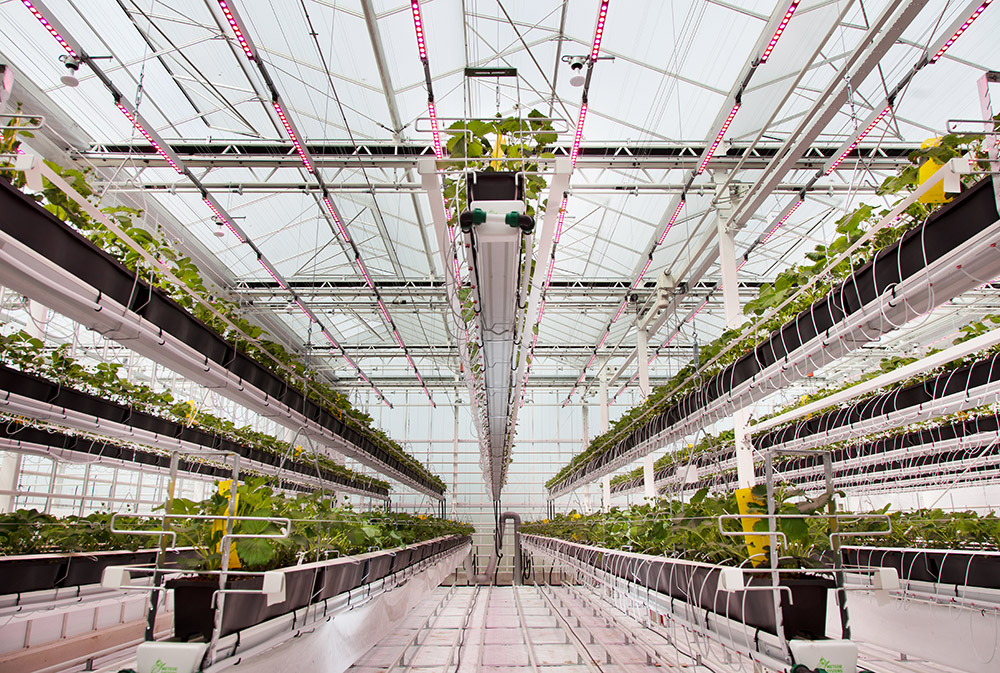 An intelligent system that lifts rows of plants individually allows us to increase the number of plants by 20 per cent in the same space.

The demo-greenhouse is also efficient with water. The water used for irrigation is completely conserved, even if it has evaporated and has been removed from the air by the dehumidifier. The water is then treated with ozone to kill any germs. Rainwater is the best available source of irrigation water. “By primarily using rainwater, you prevent the accumulation of elements that are harmful to the plants. Tap water contains too many salts for plants. Even spring water requires some treatment to be used for irrigation, because the coastal areas are silted, or because it contains too much iron. Re-using clean water is thus very important in greenhouse cultivation,” Kempkes declares. 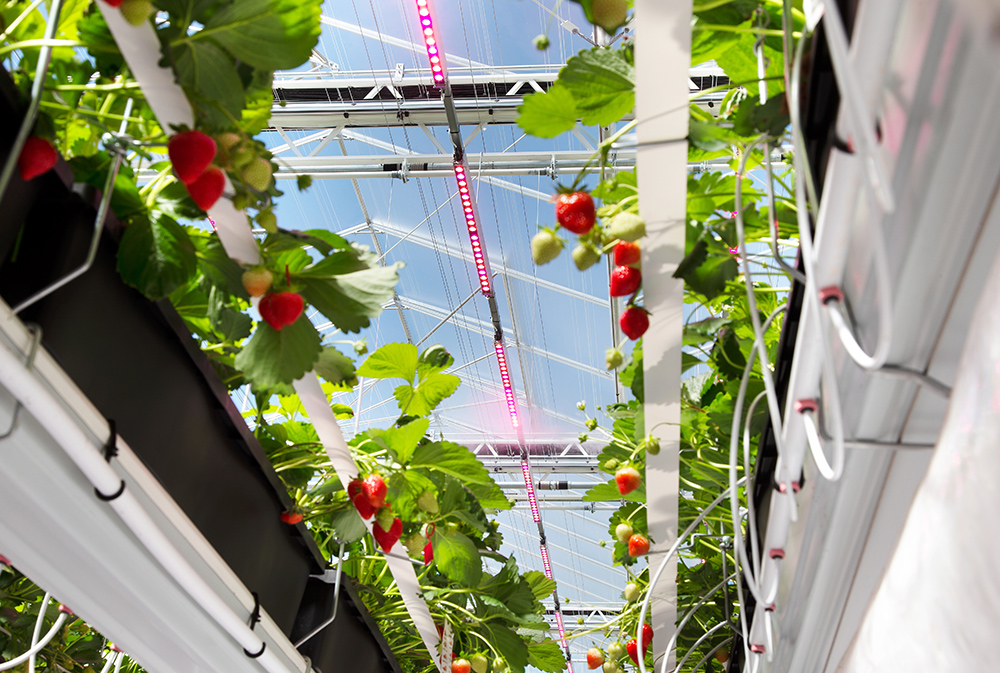 The water used for irrigation is completely conserved.

Furthermore, the demo-greenhouse has a standing army of biological exterminators such as linopodes, Reduviidae and parasite-wasps. These prevent the spread of plague insects such as thrips, whitefly and plant louse. The greenhouse contains plants that house these insects and that they use for breeding, and they are fed. Normally, a horticulturist will only order biological exterminators once an infestation has started. “This takes time, and meanwhile, the plague can spread. So our team of entomologists is now researching what conditions we need for a continuous presence of biological exterminators, and what effect this has. This requires precision”, states Kempkes.

He continues: “The conditions in the greenhouse must be favourable to the survival of the exterminators. Besides, not every plague insect has a known natural enemy.” When researchers have sufficient experience and knowledge of this method, the use of chemical agents to prevent infestations can be significantly reduced, leading to reduced emissions. That naturally also saves the costs for the cultivators.

Greenhouse 2030 is funded through the programme Greenhouse as an Energy Source (Kas als Energiebron), which stimulates energy conservation and use of renewable resources in greenhouse farming and which is funded by Glastuinbouw Nederland (Greenhouse Horticulture Netherlands) and the Ministry of Agriculture, Nature and Food Quality. Kempkes: “In the Netherlands, fruit, flowers and vegetables are grown in some 9500 hectares of greenhouses. Three hundred of those hectares are renewed annually in the form of replacement of obsolete greenhouses.” A simple calculation shows that this pace is too low to use all possibilities to be completely emission-free in 2040. The knowledge and insights gained through the demo-greenhouse can hasten this process, according to the researcher.

By the time 2030 nears, this greenhouse will likely be obsolete. “Greenhouses are increasingly constructed from smart materials. Glass will have seasonal characteristics, allowing it to insulate in the winter, while cooling in the summer,” Kempkes describes.

Frank Kempkes is specialised in energy usage and climate in greenhouses. “I have always had a keen interest in engineering. During an internship as part of my higher technical education, I first experienced horticulture. A sector that turned out to be very dynamic. Now, I have been working on the greenhouse climate and the interaction between the climate and plants for 25 years. The many he innovations have caused all manner of changes in greenhouse horticulture, and continue to do so. This makes my work inspiring, diverse and enjoyable. No day is the same.”