In order to achieve the goals set in the Paris Climate Agreement, there is a growing number of solar parks in the Netherlands, often on farmland. Wageningen scientists join forces with solar park developers to study how nature may flourish under and in between solar panels. Because with sufficient space and proper governance, plants, insects and birds that have disappeared in other rural areas may reappear.

‘The nicest solar park I know, is the Kwekerij in Hengelo, Gelderland’, says ecologist Friso van der Zee of Wageningen Environmental Research. The municipality and the solar park developer decided, in consultation with the inhabitants, to turn it into a nature park. There is abundant space between the panels, and the park is open to the public. People can take strolls or walk their dog.

‘Solar parks can be easily combined with nature. For example, with a flower-rich grassland that attracts butterflies, bees and other insects that no longer occur elsewhere in rural areas.’ However, a park with solar panels does not simply turn itself into a nature-rich spot. This is shown in a study conducted by Van de Zee and his colleagues in 2019 and 2020 on biodiversity (the variety of plant and animals species) in solar parks.

“When solar park developers delve into the issue of biodiversity, they ultimately become motivated to contribute. They take more pride in their park and are able to boast their contribution to nature development in addition to producing green energy.”

An analysis of satellite images from September 2020 reveals that there were 229 solar parks in the Netherlands at that time. This number has increased since. The Netherlands is set to increase its production of sustainable energy to mitigate global warming as much as possible. Until 2050, over 30,000 hectares of land-based solar panels will be deployed, the researchers expect.

Wind turbines produce three times as much energy per hectare, but the inland winds are less intense. Moreover, the turbines are noisy and affect the landscape from afar. ‘Although we prefer to place solar parks on rooftops, calculations indicate that solar parks on the ground are also needed. The majority of these are deployed on fertile soil leased from farmers.’

Space and set-up of the panels

The Wageningen ecologists studied 25 solar parks distributed across the country. Space is the first requirement for nature, they saw. ‘The more space between the rows of panels, the better. Because more light making its way to the ground means more plants will grow. The minimum is 2 metres, but in the Kwekerij, the space is 5 to 7 metres, which allows you to walk in between the rows.’

The way the panels are set up is also relevant, according to the researchers. ‘If the panels face the south, sufficient light reaches the ground under the panels. If they face east, it doesn’t, and hardly anything will grow beneath the panels.’ 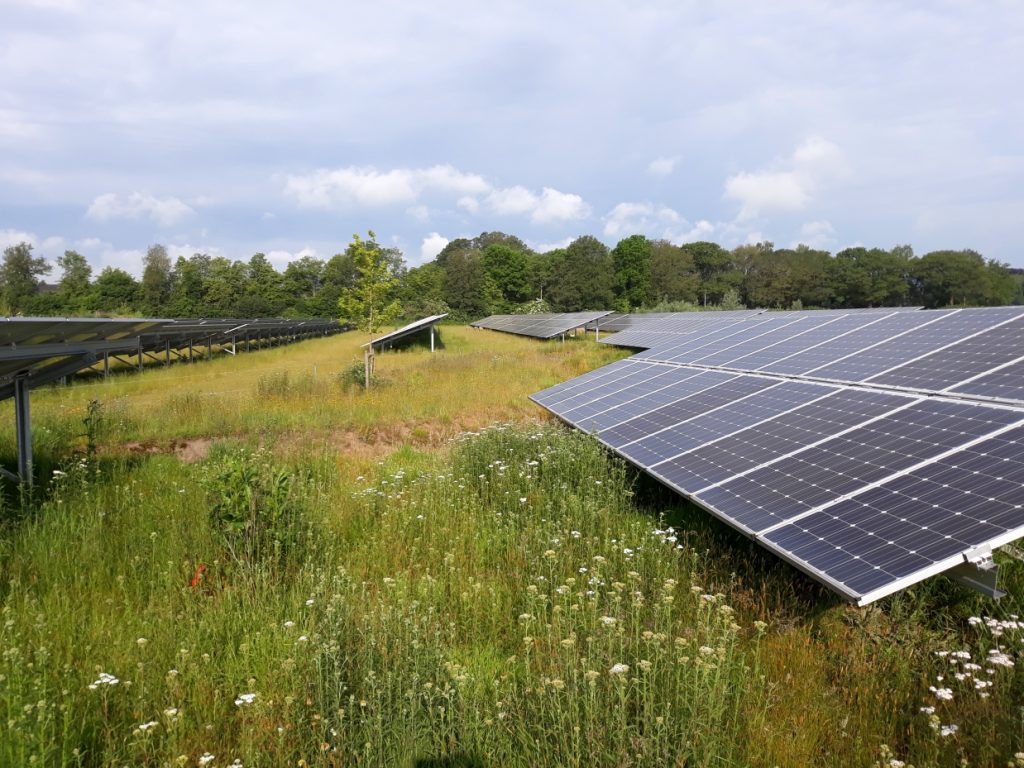 ‘The more space between the rows of panels, the better. Because more light making its way to the ground means more plants will grow.’ Photo: Friso van der Zee.

Too fertile due to nitrogen

The solar parks they studied were primarily located on fertile pastures and acres and on a few unfertilised grasslands and a former landfill. Does it make a difference whether the soil is fertilised or not? ‘Yes, a huge difference’, says Van der Zee. ‘When fertilising, unnaturally large quantities of nutrients such as phosphates, potassium and nitrogen are added to the soil. This actually makes the soil overly fertile, allowing only ryegrass, nettles and dandelions to grow in the solar parks. Other plants and flowers that attract insects fight a losing battle against these plants and perish. This is also why nitrogen is such an issue in nature areas.’

Unfertilised soil has a more advantageous baseline situation, as is demonstrated by a solar park in Budel, which was constructed on soil polluted with metals from a zinc factory. ‘It is a beautiful heath area with abundant flowers. This was already the case before the park was constructed. Plants generally cope better with pollution than with fertiliser.’

Although fertilised farmland contains much nitrogen, this can be extracted through proper soil management. ‘For example, by mowing the area and removing the nutrient-rich grass clippings. This impoverishes the soil.’

However, in most parks, the clippings are left behind because this is cheaper. ‘The first lesson is: mow and remove the clippings. By doing so, you allow all sorts of plants to return. Within three to six years, depending on the type of soil, you will have flower-rich grass that attracts many insects and probably birds too.’

To speed up the recovery process, the park manager may scatter grass clippings from a species-rich roadside edge in the park. ‘However, this should be done exclusively with the clippings of regional species. If you sow a seed mixture of exotic species, the insects will not benefit at all’, the ecologist underscores. 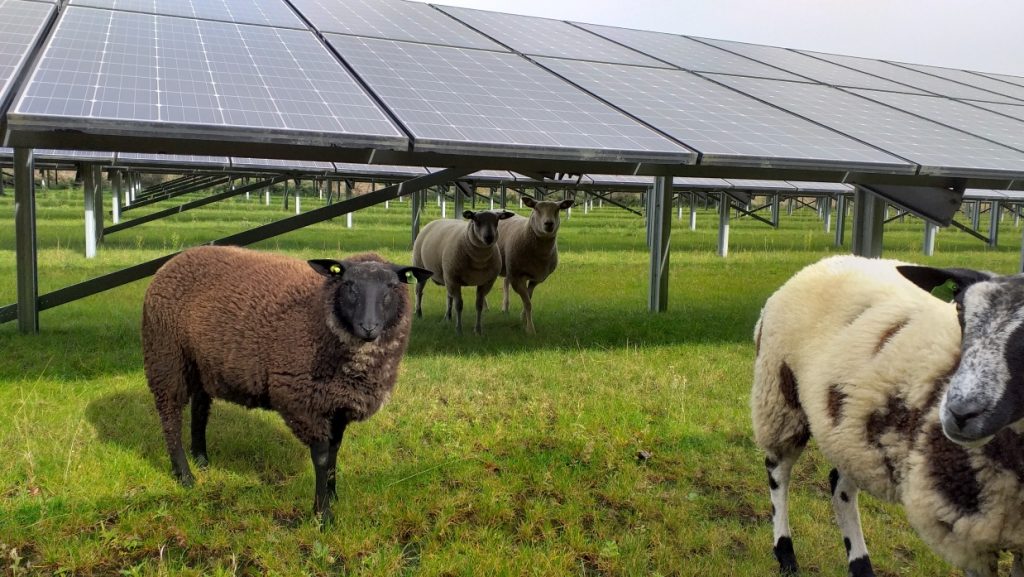 Some solar parks deploy herds of sheep, but this is often counter-effective. ‘Sheep tend to consume the flowers, and their excrement fertilises the soil. Grazing with sheep is only effective after the soil has become impoverished.’ But even then, in stages. First, one section, followed by the next a few months later and so forth. This gives plants the time to bloom so that there is a sufficient and continuous food supply for the insects.

‘Under proper management, species will return autonomously’, say Van der Zee. Nevertheless, only 3 of the 25 solar parks that were investigated are managed correctly. ‘This is due to a lack of interest and knowledge. Developers who lease the fields from farmers are focused mainly on a return on investment and maximising energy production. They seldomly consider ancillary functions such as nature and leisure.’

But it is mostly ignorance, Van der Zee adds. ‘When I explain how a park can be adequately managed, they are usually receptive. And the added costs of removing the grass clippings are low in comparison to the energy yield of the park.’

There is a crucial role for municipalities, who issue the permits for solar parks. ‘Municipalities can demand that the developers stimulate biodiversity as a precondition for issuing a permit.’ The researchers formulated ecological guidelines that developers may follow, based on their research.

‘When solar park developers delve into the issue of biodiversity, they ultimately become motivated to contribute. They take more pride in their park and are able to boast their contribution to nature development in addition to producing green energy.’ 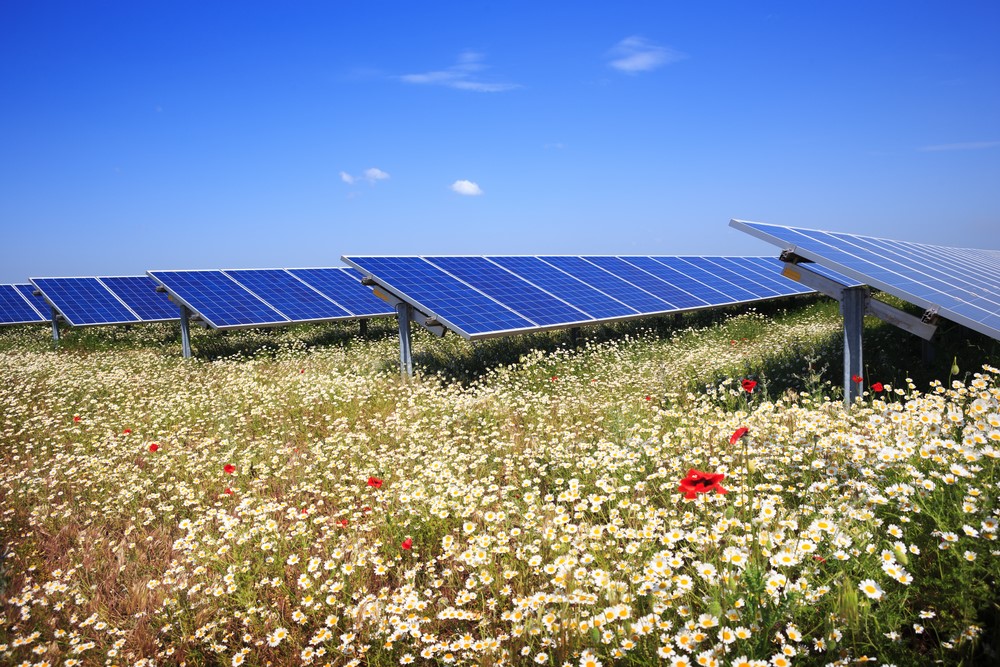 ‘When solar park developers delve into the issue of biodiversity, they ultimately become motivated to contribute. They take more pride in their park and are able to boast their contribution to nature development in addition to producing green energy.’ Photo: Shutterstock.

Moreover, nearby citizens generally refrain from lodging complaints if they can benefit from a nature-rich environment. Not a single complaint was lodged against the solar and nature park De Kwekerij in Hengelo.

Solar parks may also combine the cultivation of sun-favouring crops with generating energy. ‘In Germany, a potato crop that was cultivated in between solar panels resulted in a yield of the same volume as a regular harvest.’ In Babberich, there is currently a combination experiment underway with raspberries and one with pears elsewhere.’

The Wageningen researchers are involved in the SolarEcoPlus research project in conjunction with TNO and several solar park developers. Six innovative solar parks are planned for construction, facing south and east, and one with vertical panels that follow the sun’s path. ‘We are currently indexing the diversity in these locations. After construction, we will monitor what plants, insects, birds and small mammals such as rabbits and bats emerge.’

Van der Zee is also a project leader Biodiversity and Nature within the Solar Research Programme. This Wageningen research programme also encompasses soil quality, landscape and spatial planning, governance and participation, multifunctional agriculture and local climate. ‘Because, in addition to maximising energy yields, solar parks are able to positively contribute to society in a broader sense.’

Friso van der Zee studied Biology in Wageningen. He has worked as an ecologist for approximately 35 years. At the Ministry of Agriculture, Nature and Food Quality, and the Nature Data Authority, among others. Since 2014 he works as a project leader and researcher in the Wageningen Environmental Research Biodiversity and Policy team. ‘Much of my work focuses on non-standard locations, such as train tracks, roadsides, river dykes, military terrains and solar parks. So, I often work with parties who are not at all preoccupied with nature management. This is why I like to go to the area with them to show them what lives and grows there. The other day, I pointed out a ditch to a solar park developer, which was not fertilised like the rest of the park. It contained a veritable sea of flowers. The developer had never noticed this before and became very enthusiastic. If people learn to see nature, they are more motivated to contribute to it.’