Wageningen researchers have shown that the greater the number of wild bees and bumblebees present, the greater the harvest from farmers’ fields. To protect and restore the wealth of animal and plant species in the Netherlands, they are participating in the Delta plan for biodiversity along with farmers, nature conservation organisations, ecologists, and businesses. How important is nature to you?

“The number of pollinators, especially solitary wild bees and bumblebees, has an effect on crop yield,” says David Kleijn, Professor of Plant Ecology and Nature Conservation. Research on 36 agricultural plots in France and Italy shows that wild pollinators are at least as important for the yield of the crop as the vitality of the plants themselves. Plots where more pollinators were flying around produced much more leek seed. “The seeds may be smaller, but they germinate better,” explains Kleijn. The researchers looked only at the production of leek seed, but expect that the findings will apply to most crops. “I am always surprised at how consistent that effect is, too.” 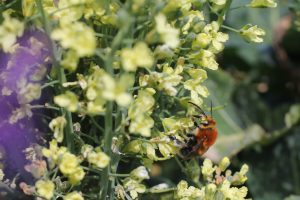 “The value of wild bees and bumblebees and in turn, of biodiversity is underestimated,” according to Kleijn. “The agricultural sector focuses particularly on fertilisation and weed control. Most types of fruit, nuts, and oil-bearing crops are pollinated by insects. This means that it can be very profitable to protect wild pollinators, both for farmers as well as for nature itself.” This spring a study will be conducted on bumblebees and lupine. Kleijn and his colleagues will also look at how the presence of wild pollinators can be stimulated. They will perform research on agricultural plots, often in a wide range of landscapes. “That is more realistic than a laboratory setting. In this way, we hope to convince farmers that pollination is at least as important as fertilisation or other regular management methods.”

“The Netherlands is managed extremely intensively, yet in many places the landscape is still quite small scale,” says Kleijn. Small-scale activity and variation in the landscape ensure a greater abundance of animal and plant species. However, this natural richness appears to be dwindling with each passing year. For instance, the number of bugs in German nature reserves has declined by more than 70% over 30 years. Kleijn: “In general, there are fewer and fewer animals. The black-tailed godwit is declining by 5% or 6% each year in the Netherlands. The number of skylarks, formerly the most widely distributed bird, has gone down by 95%. Something really must be done now.”

To restore species diversity, scientists, farmers, and people from businesses and nature organisations have put their heads together. Since December 2018, they have been working together on the Delta plan for biodiversity. The main idea behind it is that land users, such as farmers, should be rewarded for their contributions to nature protection and restoration of biodiversity from now on. Kleijn sees a number of opportunities. One example is when farmers get paid to take care of roadside management for municipalities. “Currently, this is done by large companies all at once and as cheaply as possible. Conservation of biodiversity plays no role in it at all. However, it is much easier for farmers to mow in stages. And if they scatter the clippings on their fields, that can even improve the soil,” says Kleijn.

“ It can be very profitable to protect wild pollinators, both for farmers as well as for nature. ”

Rewarding the performance of farmers

Networks of farmers, businesses, and environmentalists are going to test measures out and see which ones work best. Wageningen is closely involved in the Delta plan for biodiversity. Much of Wageningen’s research into biodiversity, both in nature reserves and in the city, is relevant. Kleijn has conducted a great deal of research into agricultural nature conservation. This involved all types of management measures, such as how early the farmer mows their land and how much they fertilise it. The results, however, were disappointing. “We expect that it will yield more if the rewards are linked to performance. For example, it would involve how many acres of herb-rich pasture a farmer produces, instead of not being allowed to mow before a specific date. That serves as a positive incentive.”

“The biodiversity in agricultural areas in the Netherlands is, apart from in nature reserves, not being recorded well as of yet. For many species, we don’t know how quickly and why they are declining,” explains the professor. That is why Kleijn is working on the development of a monitoring programme. Current monitoring has been under way for many years and is based on the commitment of volunteers who take stock of animal species. Kleijn wants to combine the strengths of this with more detailed monitoring. “This is necessary to determine whether the performance of the farmers I was talking about just now, is sufficient to reverse the decrease in biodiversity.”

“For the success of the new nature restoration plan, it is necessary to be able to follow developments closely,” emphasises Kleijn. “You have to know what works. If something does not lead to the recovery of biodiversity, it must be done in a better way. And if your work shows that it is delivering good results, this provides excellent motivation.”

How important is nature to you? Do you have comments or questions about the Delta plan for biodiversity? Start a conversation below.

"Nature is important for the intrinsic value that we grant it, in addition to the functional arguments. Everyone would like to live in a beautiful landscape. That's why I want to help restore the species-rich agricultural landscape."