Less fertiliser thanks to earthworms

Too much fertiliser impacts the environment. Fortunately, we can utilise the nutrients that are already available in the soil more efficiently, in keeping with circular agriculture. Wageningen scientists study the effect of earthworms on nutrients such as nitrogen and phosphorus. Earthworms eat both organic materials and soil particles and discharge them in their faeces. Thereby, they supply nitrogen and make residues of previously applied phosphorus fertiliser available for plants. Want to see how earthworms operate in the soil?

‘Everyone knows that earthworms benefit soil fertility. Nature conservationists and farmers seem to agree on very little, but this is something they do see eye to eye on. Worms may play an even bigger part in agriculture than in nature’, says Wageningen soil scientist Jan Willem van Groenigen. That earthworms are beneficial to plant growth is a well-known fact. ‘The question is: how does that work?’

The soil in the Netherlands contains much phosphorus, mainly as a result of fertiliser applications in the past. ‘Plants are unable to take up this phosphorus as it is chemically bound to soil particles. Our experiments over the past decade, however, show that phosphorus availability to plants in earthworm faeces can a increased by a factor 100 to 1000!’

This large amount of available phosphorus in worm faeces is so much higher because of several processes. Earthworms do not just eat organic material, but also soil particles. Their intestines serve as a chemical reactor in which the phosphorus from residual fertiliser becomes available.

These results provide hope for the future, since phosphorus is a limited resource.  Estimates on how much longer we will be able to produce phosphorus fertiliser range from 50 to 200 years. ‘Phosphorus prices will rise in the future, and it will become an increasingly important resource in a geopolitical sense. This makes it even more interesting to know that the Dutch soil contains sufficient residual phosphorus to last us for three to four decades’, says Van Groenigen.

In anticipation of the future phosphorus shortage, scientists are experimenting with new types of phosphorus fertilisers, such as struvite from organic waste produced by soya processing plants, or from urine. Students of Van Groenigen are conducting field studies with struvite and three different types of earthworms, individually or in combinations. ‘Struvite is not very soluble, and we are testing whether earthworms can make it more accessible to plants.’


There are some 20-25 different species of earthworms native to the Netherlands. Some eight of those are common in farmland. There are three main categories:
‘Litter-dwellers’ have a reddish colour over their entire body and are also found above ground, where they eat leaves. ‘Soil-dwellers’ are the greyish earthworms, who live underground and consume soil and semi-decomposed organic matter. ‘Commuters’ have a purple head and grey body and move through the soil vertically. They pull leaves down from the surface into the ground.
Several short timelapse movies of earthworms in action made with artist Wim van Egmond:
– Worms in different layers of soil
– Decomposition of leaves with and without soil life
– In the vermicomposting heap

Scientists have studied the positive effect of worms on plant growth for years. ‘When we combined all these studies in a meta-study, we found that on average, crops produce a 25% higher yield in the presence of earthworms. This is largely due to the fact that they make nitrogen in the soil more readily available. These results, however, only apply in nitrogen-poor environments. The benefits of earthworms are, thus, more significant in farming systems with little or no artificial fertilisers.’

Van Groenigen was able to discover how worms make nitrogen available. They eat organic materials and discharge mucus in their intestinal tract. This slime stimulates the microbial life in the digested material, and these microbes subsequently break down organic matter, making nitrogen available in the process, which plants can take up.

‘I would like to stress that earthworms themselves do not produce nitrogen. They merely process nitrogen and other nutrients already present in the soil.’ This is why earthworms are essential to ecological agriculture, because they are good at recycling nutrients from animal manure and compost.

“As soil ecologists, we often study how nature works and aim to emulate this in agriculture. However, I think that soil creatures may well have very interesting additional roles to play in agriculture.”

In the past, soil scientists also studied earthworms’ greenhouse gas emissions. ‘Humans apply too much nitrogen to the soil. Microbes transform this into nitrous oxide. Earthworms stimulate these microbes and dig vertical tunnels, which provides underground ventilation and drainage. However, these tunnels also allow nitrous oxide to escape before it can be converted into a harmless compound.’ Recent research by the Van Groenigen group suggests that nitrous oxide emissions can be lowered by some 10 to 20 per cent if soil life is more biodiverse. 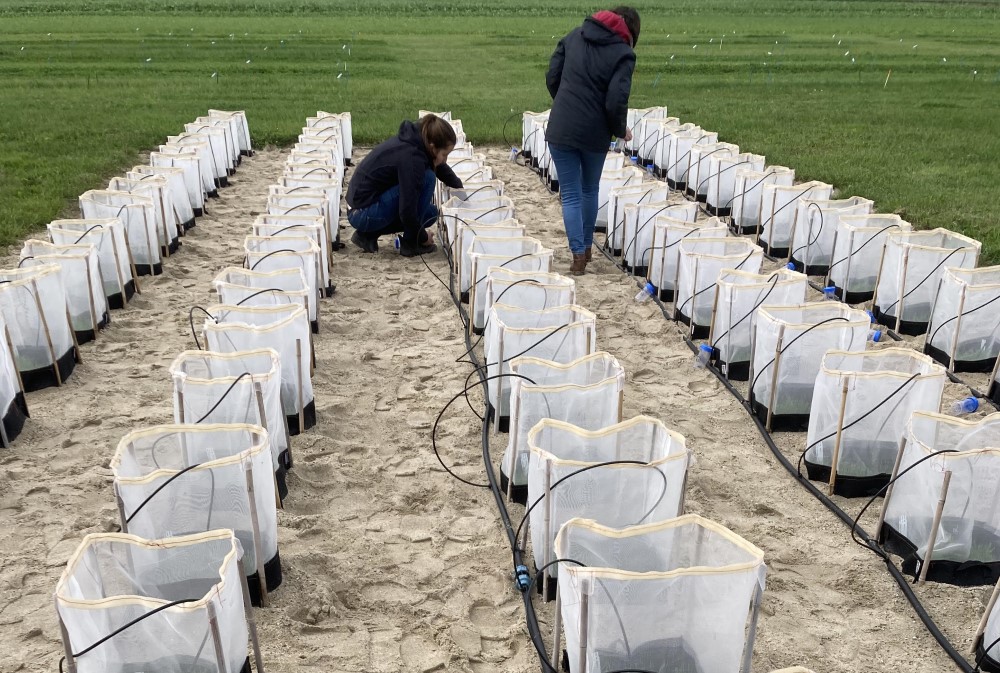 Members of Van Groenigen’s team have set up a field experiment on WUR campus to determine whether earthworms can increase the availability of phosphorus in struvite to plants, and whether higher earthworm diversity further increases this effect. Struvite is produced from waste streams in factories and from urine.

A newly EU-funded project has been launched to study whether worms may also help store carbon, and thus mitigate global warming. This study involves olivine rock dust: when this weathers, it takes up carbon dioxide from the atmosphere. Van Groenigen expects worms to speed up this process. ‘It is actually a very wild idea. But, if it works, it will be spectacular’.

Van Groenigen collaborates closely with soil chemists in his research. ‘Traditionally, soil chemists don’t know all that much about earthworms, while soil ecologists aren’t very knowledgeable about phosphorus. I detected some scepticism at first when I asked soil chemists to collaborate on this research. But, as soon as we saw the preliminary analyses of worm faeces, it triggered their enthusiasm and interest.’ Conversely, Van Groenigen has developed much appreciation for the chemists’ drive to really understand processes in both a quantitative and mechanical sense. ‘The beauty of interdisciplinary research is that it fosters an appreciation for other people’s expertise and approach.’ 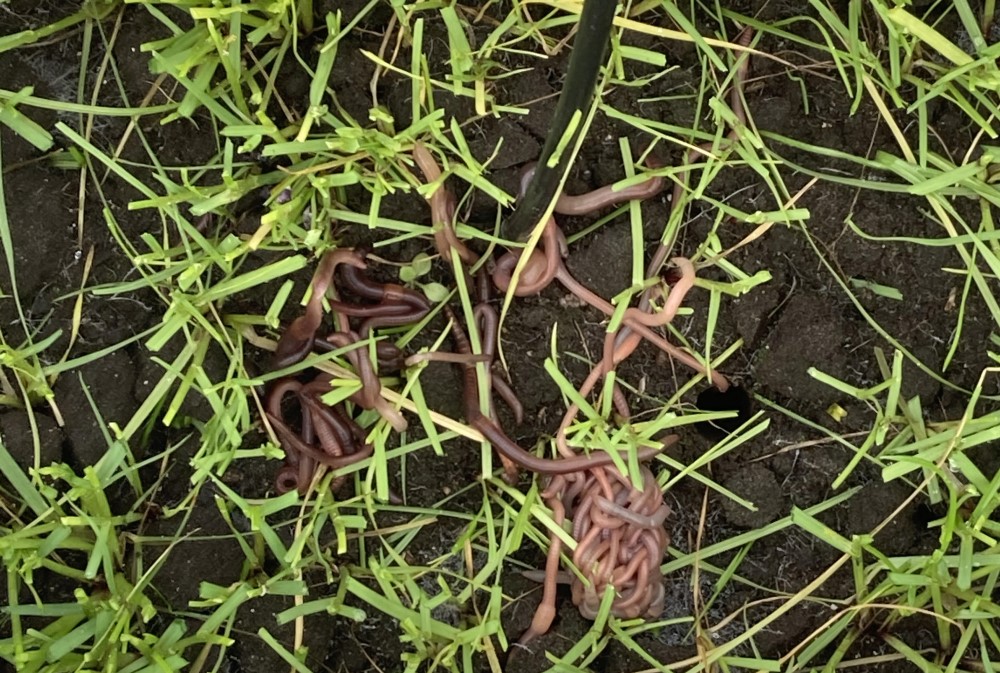 All things considered, earthworms strongly benefit farming systems, Van Groenigen emphasises. And this not only goes for earthworms, but also for other soil animals such as mites and springtails. ‘Soil ecologists often try to emulate nature as much as possible in agriculture. That is an excellent point of departure. However, I think that soil creatures may well have very interesting additional, yet to be discovered, roles to play in agriculture.’

Actually, Jan Willem van Groenigen is more of a ‘soil-bio-geo-chemist’, he says, smiling apologetically. He is an expert on the nitrogen, phosphorus and carbon cycles in the soil, and how soil life influences these cycles. After concluding his master’s and PhD in Soil Sciences in Wageningen, Van Groenigen worked as a researcher at the University of California in Davis. In 2001 he joined Alterra, now Wageningen Environmental Research. After some time he transferred to the Soil Biology Group of Wageningen University, where he was appointed personal professor in 2017. ‘I have a strong drive to understand soil nutrient cycles, because almost all major environmental issues can be linked to the soil. The answer to these issues is often also found there. But you cannot really understand the soil without understanding soil life.’