The high mortality rate amongst European honey bees is principally caused by the varroa destructor. Ten years ago, Wageningen researchers started examining natural selection as a potential solution, so ultimately the most resilient bee colonies survived. “We wanted to allow nature to solve this itself and this occurred much faster than expected.” The first Dutch beekeepers will now also apply this method.

Many of our crops worldwide need animal pollination to be able to produce fruits and seeds. “Honey bees are by far the most important and versatile pollinators”, says Tjeerd Blacquiere, researcher at Wageningen University & Research. However, kept bees have shown high mortality rates for years now. This is mainly due to the varroa destructor mite, which reproduces on the larvae and pupae of bees. The parasite switched from the Asian honey bee to the western honey bee when western beekeepers brought honey bees with them to Asia. Since then the mite has spread across most of the world. European honey bees have shown poor resilience against the varroa destructor, which first appeared in the Netherlands in 1983.

Beekeepers soon started to combat the mite, first with chemicals and later with more natural methods. However, the mites rapidly became increasingly resistant and the treatment substances accumulated in the beeswax and honey. Now beekeepers mainly use oxalic acid, with which they treat the honeybees two to three times per year. But this acid is also irritating to the bees themselves.

Initially, the research focused solely on the fight against the varroa destructor. But after 2000, the first reports appeared about bee colonies living in the wild that proved resilient against this mite. These bee colonies had quickly built up resistance to these deadly intruders. That gave Blacquiere hope. “Could natural selection result in the honey bees being better equipped for dealing with the mite?” 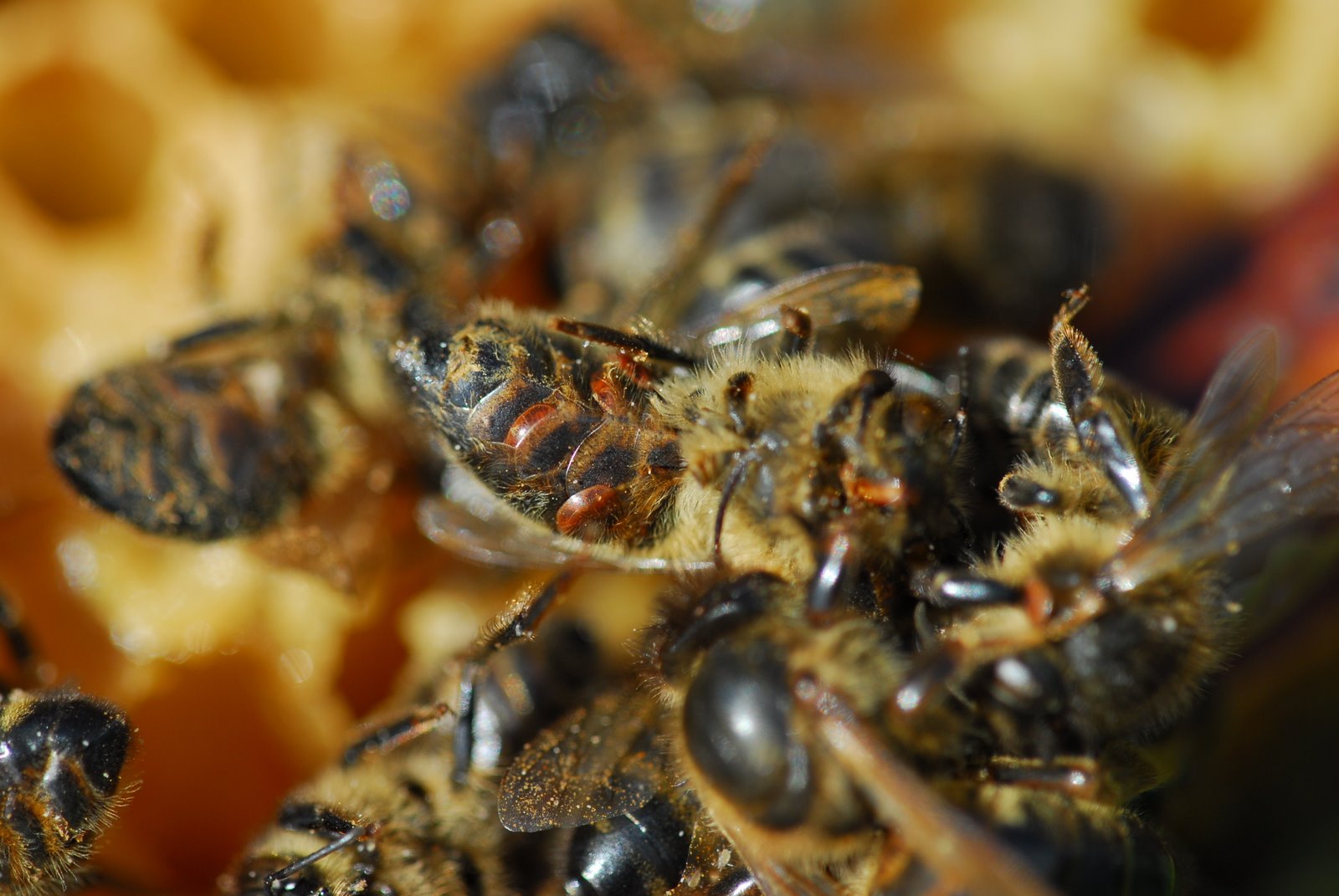 Dead bees with varroa mites between the segments of the abdomen of the bees. Photo: bees@wur

In 2008, Blacquiere and his colleagues started an experiment with two large bee populations – groups of twenty to fifty colonies. They stopped combatting the varroa destructor. Blacquiere: “The colonies that were poorly equipped to defend against the mite soon perished. The most resilient populations survived.”

Over a ten-year period, Blacquiere succeeded in breeding bee colonies that are resistant to the varroa destructor. “The bees adapt much faster than we expected”, says the researcher. “It was a good idea to not try and come up with the selection trick ourselves. Researchers have been working with selection programmes for varroa destructor resistance, but with little success. Apparently, nature can get the job done better itself.”

“ The beauty is that natural selection is easy to implement. No complex techniques or labs are needed. Beekeepers can carry it out locally with their own bee colonies.”

Resistant bees appear to slow down the mite’s reproductive capacity. When a bee larva grows, a mite can slip into its cell and reproduce. Normally a grown mite can produce two or three little mites. But with resistant bees a mite only produces one offspring. “How exactly they manage this is still unclear”, says Blacquiere.

The bees also have another tactic. When a bee larva pupates, his cell closes. If there is a mite in the cell, it will also be enclosed in the cell. Resistant bees, however, can smell the mites in the cell, and therefore track them down. They then open the cell and throw the young mites out. These mites are then not yet viable. However, neither is the bee pupa, which is also sacrificed. This is why Blacquiere calls it a “less elegant solution”.

Some beekeepers are now also starting to apply this type of natural selection. “The beauty of it is its simplicity. No complex techniques or labs are needed. Beekeepers can implement it locally with their own bee colonies. It does require stringent time planning in spring, though.”

By working on location with their own bee colonies, the genetic diversity and local adaptations are preserved”, Blacquiere explains. Beekeepers often draw their queens from elsewhere, to increase honey production and in the hope that they will sting less. “This is a major cause of the rapid spread of parasites and diseases”, says Blacquiere. “It’s better to work within your own bee population, to keep it healthier. Nature chooses what it needs by itself. ”

For natural selection, many beekeepers will have to work together with one or two colleagues. “You have to start with a minimum of twenty colonies. You can use some of the colonies to start the selection process, while the rest continue producing honey”, says Blacquiere, who keeps bees himself. He thinks selection will always be necessary. “The bees must continue to adapt, because the mites will also keep developing new tricks. If this goes well, we can even stop fighting against the varroa destructor.”

Tjeerd Blacquiere was trained as a biologist and has worked as a botanist. Thanks to his wife, he became a hobby beekeeper and, in 2001, started work as a beekeeper in Wageningen. “I greatly enjoy this work. The questions in our research are very fundamental on the biological level and it’s easy to get hooked on working with bee populations. Studying a bee colony is like snorkelling in a coral reef. You simply observe while the animals do their own thing. That is pure beauty."