Nature restores itself in the Marker Wadden

An exciting new place to experience nature is being created in the Markermeer lake in the central Netherlands. It is a part of an important nature restoration project.

The Markermeer was established when a dike was built across the Ijsselmeer in 1975 to connect Enkhuizen and Lelystad. The Markermeer is on the south side of the dike, while the Ijsselmeer lies to its north. The Markermeer used to be rich in nutrients and was home to a wealth of fish and birdlife, but over the years the nutrient levels in the lake fell and bird and fish numbers declined.

However, nature conservationists, engineers and scientists are now working to break the downward spiral. They plan to breathe new life into this area that’s basically become nothing more than a ‘tub of water’. They will apply nature-based solutions; solutions inspired by nature that harmonize with the ecosystem and contribute to improving the quality of the habitat. Nature-based solutions was also the theme of this year’s World Water Day on 22 March.

A characteristic of natural ecosystems is that they can bring about their own recovery following a disturbance or change. In the Markermeer, natural processes are being stimulated to initiate a process of natural recovery.

“We want to breathe new life into this tub of water”

Let us start by examining why the levels of nutrients in the Markermeer decreased, which in turn also decreased the diversity of fish and bird life. As crazy as it may sound, one of the reasons was actually better sewage treatment. Up until the 1980s, water from Amsterdam’s sewers was only lightly treated before being piped into the lake. This resulted in a constant supply of nutrients such as nitrogen and phosphorus (in Dutch), which was good for the growth of algae, the lowest life form in the food chain. Thanks to this sewage, the lake continued to support the high numbers of birds and fish it had before the dike was built. When sewage treatment improved, the supply of nutrients decreased, resulting in poorer conditions for algae, soil fauna and the rest of the food chain. And so the life in the lake was drastically reduced.

A second problem that played a simultaneous role is that the lake is rich in silt. The more silt, the cloudier the water, and the cloudier the water, the less organisms can survive that need sunlight, such as algae. ‘Algae still occur in the Markermeer, but these are tiny algae that moreover attach themselves to the silt, making them practically unavailable as a food source,’ explains Prof. Piet Verdonschot, aquatic restoration ecologist with Wageningen Environmental Research. So, although the silt is rich in nutrients, this food source is almost inaccessible.

A final reason for the lack of life in the lake is that there are no riparian zones; gradual transitions between land and water that are important for flora and fauna. Such zones cover huge areas of land around natural lakes. The Markermeer was originally part of a delta. Before the construction of the Afsluitdijk and Houtribdijk causeways in 1932 and 1975, the IJssel River flowed into the Zuiderzee, which in turn joined the North Sea. ‘If you look at an aerial photo of the Amazon delta, you can see it is dotted with sand banks and islands and has a wide riparian zone,’ explains Verdonschot. ‘The Markermeer has never had these features of delta systems.’

The solution to break the downward spiral was to release the nutrients from the silt by means of natural processes. They did this by bringing the silt to the surface and growing plants in it. The plants absorb the nutrients and so reintroduce them to the food chain, while rain and floods also flush the nutrients back into the water. ‘This re-establishes the natural nutrient cycle in the lake, which in turn brings new life,’ says Verdonschot.

At the initiative of Natuurmonumenten, construction is underway on the Marker Wadden (in Dutch), a group of five islands located four kilometres to the south of the Houtribdijk causeway between Enkhuizen and Lelystad. The islands are formed from sand, clay and silt from the Markermeer. The use of silt in construction is new for the hydraulic engineers. 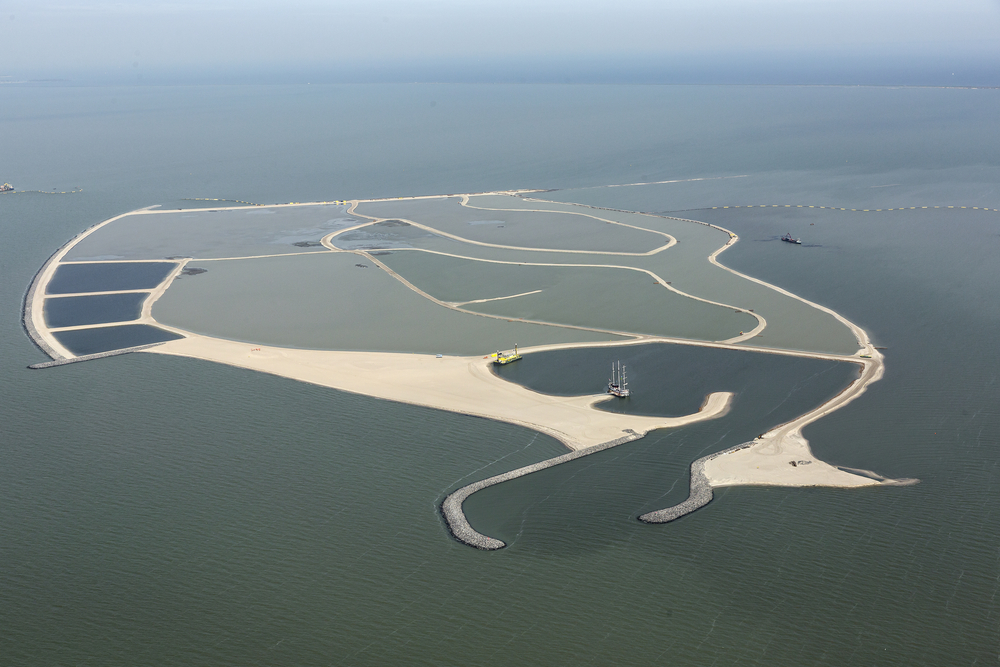 The construction of what is hoped will become a new paradise for birdlife started in 2016. ‘We hope that this project will turn the tide and reintroduce nutrients to the food chain in the lake, even if only at a small scale,’ says Verdonschot. The swampy areas between the islands will become new spawning and nesting grounds for fish and birdlife. Researchers from WUR are studying the interaction between the natural processes and monitoring soil fauna and fish populations and the effect of the new nature on the fisheries and the Natura 2000 targets (both can profit from the restoration of the food chain in the lake).

One of the islands will be made accessible to visitors by water, with a small jetty for boats. This island is some nine kilometres by boat from Lelystad and ten kilometres from Enkhuizen. The island will have a visitor’s centre, walking paths and a bird hide on its farthest corner. This will ensure that, alongside the fish and birds, people too can enjoy all that the new nature has to offer. The project is also expected to generate more income for Lelystad through the increase in water recreation and hotel stays.

Conversationally, it is exactly one hundred years ago (21 March 1918) that the Dutch House of Representatives decided to turn part of the Zuiderzee into polders. The aim was to create a new agricultural region to prevent food shortages such as occurred during WWI. Today, we are working in the former Zuiderzee to prevent further ‘nature shortage’.

Example of new nature in a delta zone

The project is an example of how new opportunities for nature can be found even in the most densely populated delta regions, making use of natural ecosystems and the region’s natural resilience. WUR’s researchers have unique knowledge in this respect because they combine three strengths: they have an in-depth understanding of how nature works (ecosystems), they research and develop new technologies, models and interventions based on natural processes, and they manage the interaction between humans (users and managers of natural areas) and ecosystems.

or more than forty years now, Prof. Piet Verdonschot has been studying the structures and functioning of new and restored wetland ecosystems and the integration between various biotic and abiotic factors and processes in wetlands, from one metre above to several metres below water level.

what is a case analysis paper krispy kreme