Seaweed as a sustainable food source

More food is needed to feed the increasing world population. But the availability of arable land and water is decreasing. This is why Wageningen and Indonesian scientists and businesses, research the possibilities of cultivating seaweed. Cultivating seaweed requires only sunlight, while it purifies water, and is a sustainable crop. Furthermore, seaweed is a ‘superfood’, which is easy to process into healthy and tasty food for human and animal consumption. Do you want a seaweed cracker?

‘Worldwide, there are approximately 48 million square kilometres of sea suitable for the cultivation of seaweed,’ says Dolfi Debrot, a tropical marine ecologist at Wageningen University & Research (WUR). As a result of depletion, desertification, erosion and salination some 38 per cent of the arable land is increasingly less suited for cultivating food. Besides, there is a reduction in the availability of sweetwater needed for irrigation in agriculture. ‘Water scarcity is already a major problem in some countries and will likely cause an increase in conflicts in the future.’

Meanwhile, the world population is on the rise. According to Debrot, the need to feed everyone makes looking into extracting food from plant sources a logical choice. ‘The production of fish and meat requires significantly more food than it yields. Also, there is already quite some overfishing.’

“Seaweed is very healthy and nutritious and efficient in its use. Unlike corn and wheat, the entire plant is edible. Seaweed extracts its own fertiliser from the water, purifying water that has been polluted with fertilisers. It may contribute significantly to sustainable food production.”

Although many don’t primarily consider seaweed as food, it is very suited for consumption. ‘Seaweed contains healthy and good lipids, proteins, vitamins and minerals. It is a type of superfood,’ Debrot explains. He researches the cultivation of seaweed in Indonesia and regularly eats it. ‘I always bring back seaweed snacks when I return to the Netherlands. Our entire family enjoys them.’ 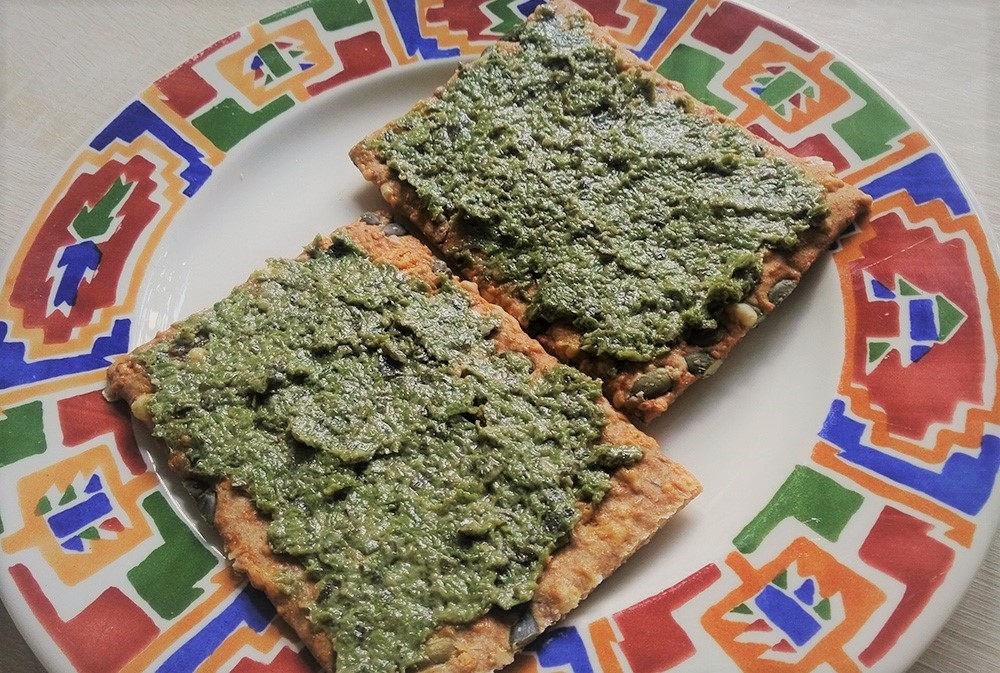 Recent research shows that 132 countries are suited for seaweed farming, however, only 37 countries, among which Indonesia, actually cultivate it. In Indonesia, there is an extensive seaweed farming industry, including export. The seaweed is also consumed in Indonesia, however mostly as an ingredient for juices and baby food, or as a thickening agent. Seaweed can be consumed by humans, but can also be processed in animal feed. Debrot: ‘Unlike crops such as grain, soy and corn, seaweed is very efficient. The entire plant is edible.’

WUR researches seaweed farming in Indonesia, to determine what conditions are needed for the cultivation. This study is carried out by Debrot and his team, in collaboration with Indonesian counterparts that lead the investigation and take readings at seaweed farms. ‘Seaweed is mostly cultivated in the coastal areas due to waves, currents and, of course, accessibility,’ states Debrot. 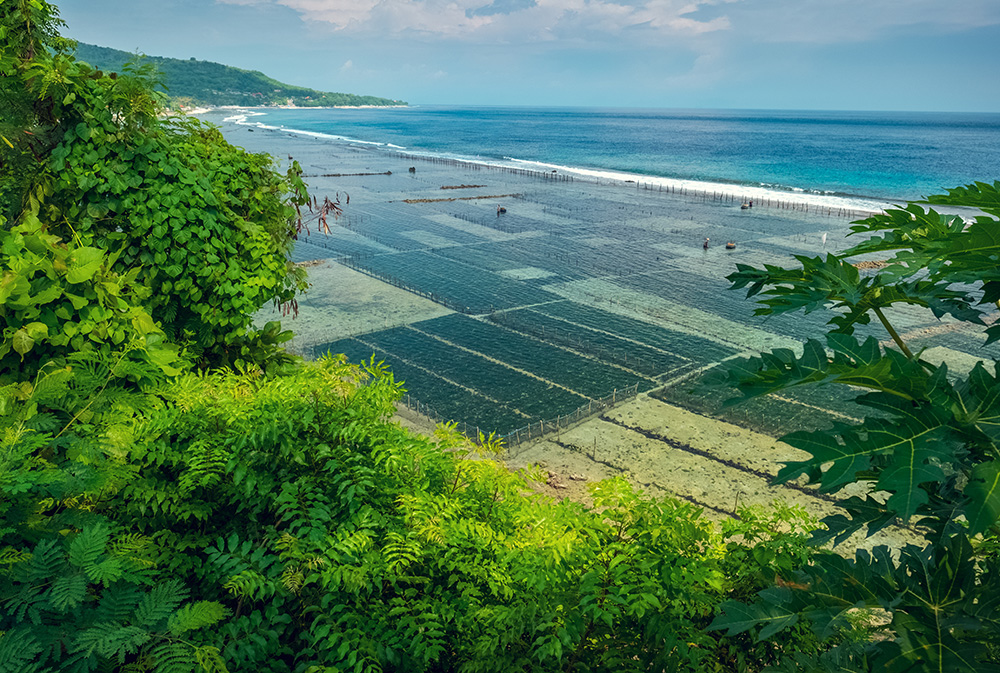 Seaweed needs no fertiliser; it extracts nutrients from the water.

Whether, and how successfully, seaweed can grow, depends on water temperature and the concentration of nutrients in the seawater. ‘Seaweed needs no fertiliser; it extracts nutrients from the water. This is another major advantage, as agricultural fertilisers are expensive.’ In locations where deeper seawater rises to the surface, such as in river deltas, there are more than enough nutrients available in the water. ‘Rivers often contain high levels of fertilisers that have been added to the soil by farmers. These cause pollution and allow algae to flourish. Seaweed extracts these fertilisers from the water and in doing so purifies it.’

The water purifying characteristics of seaweed could also help prevent the felling of mangroves in Indonesia’s coastal areas. Shrimp breeders cut down mangroves for their shrimp ponds, which eventually become contaminated and poisoned as a result of the intensive shrimp farming, in which pesticides and chemicals are used. Shrimp are susceptible to disease, so they require antibiotics. When a pond is too polluted, the farmer cuts out a new pond. ‘There are a staggering number of ponds in disuse, and the mangroves are increasingly destroyed. Mangroves are essential to the protection of coastal regions against flooding, such as the 2005 tsunami. This is why the Indonesian government is set on conserving and restoring the mangroves.’ 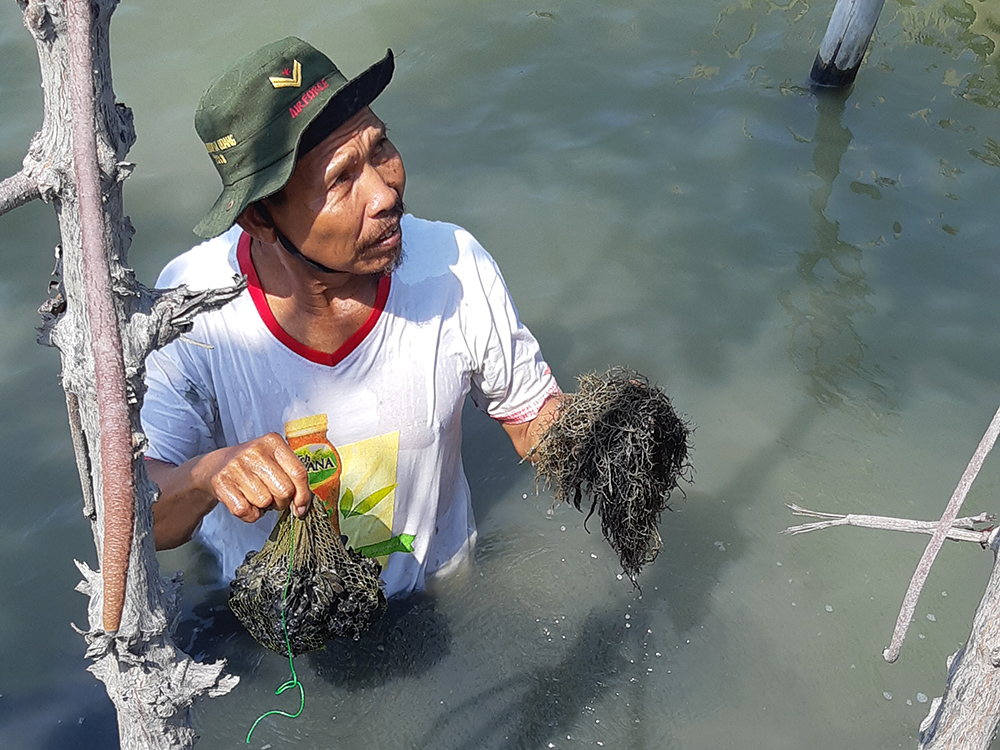 Shrimp farmer with a bag of cockles and a seaweed from his shrimp pond where these three species are grown together (Integrated Multi Trophic Aquaculture).

What is the role of seaweed in this process? Debrot: ‘By cultivating seaweed and shrimp on the same location, the water in the ponds remains clean. Seaweed extracts fertilisers produced by shrimp from the water and the shrimp remain healthy, eliminating the need for antibiotics.’ Some farmers are already combining seaweed and shrimp in their cultivation. ‘We study the reasons why farmers choose a certain farming method, to gain a better understanding of which methods are best, enabling us to advise other breeders and cultivators. Using combined cultivation makes production much more sustainable.’

Twenty Wageningen researchers are involved in the four-year research project, ranging from ecologists, animal- and plant scientists to experts in development aid and economists. The results of the project will provide insight into the global opportunities for seaweed cultivation, Debrot expects. Researchers are curious about which type of seaweed is best suited for production and consumption. ‘We also want to know how we can motivate people to eat seaweed. Is it the fact that it not well known? Are aspects such as flavour and cultural preferences relevant?’

Entrepreneurs, government, non-governmental organisations, consumers and scientists can eventually all benefit from this research. ‘We chose seaweed because it is innovative. Seaweed can potentially contribute much more to a sustainable food supply than is currently the case.’

Dolfi Debrot obtained his PhD in Fisheries Management at the University of Miami. After having worked in the United States for several years, he spent two decades working as a researcher, vice-director and then director at a scientific ecological institute in Curaçao, the country of his birth. As a result of the administrative changes in the Netherlands Antilles in 2010, the Netherlands became responsible for its nature conservation, which resulted in job openings at Wageningen University & Research. ‘I am involved in a broad spectrum of tropical research with a focus on nature management, conservation of threatened species, fisheries and food production. Aside from the Caribean islands that are part of the Netherlands, my work is global. My main focus is the sustainable use of natural resources.’