Self-test for allergens in food

If someone with a peanut allergy accidentally ingests traces of peanut, it can have serious or even fatal consequences. Wageningen researchers have developed a simple test that consumers can use to test food for certain allergens on the spot, and they can view detailed test results on their smartphone. Scientists are working on similar tests for farmers and manufacturers to detect toxic substances in food.

Increasing numbers of children and adults have a food allergy. “People can be allergic to almost any type of food. The allergy can be mild, but also very severe or even life-threatening,” says Wageningen researcher Gina Ross. It is not always clear when food contains an allergen, which is a substance that someone is allergic to.

“The self-test is a portable mini-lab which makes chemical analysis accessible to everyone. This enables us to democratise science.”

In factories, different foods can come into contact with each other, causing cross-contamination. Minute particles of peanuts or nuts can end up in other foods through the air. Many food manufacturers therefore state on the packaging that a product “may contain” traces of peanuts, nuts, etc. Ross says that many food manufacturers do their best to avoid cross-contamination, but that it sometimes happens by accident.

Over the past few years, Gina Ross has developed a simple self-test that consumers can use to check whether there are traces of peanut or hazelnut in a product. You take a small sample of what you want to eat, such as a biscuit. You put it in the test, which is called an immunoassay. If there are allergens in the sample, a black line will appear on the test strip within minutes, along with a control line.

If you want to learn more, you can connect the test to your smartphone with a special holder. Detailed test results, such as the amount of allergens in the sample, will be displayed on the screen. If no line appears, you can safely eat the product. The control line will be visible, which indicates that the test was performed correctly.

This video explains the use of the self-test.

Not yet in production

The self-test for traces of peanut and hazelnut in biscuits is not yet going into production; additional research is required first.

Ross’s test is very easy to use. “A 15-year-old student who happened to do a short internship with us was able to use the test with no problems after a brief explanation in an IKEA-style manual.” The type of test the researcher has used, an immunoassay, detects allergens by using antibodies. Coronavirus tests use the same principle for detecting the coronavirus. Pregnancy tests do the same, but they detect hormones.

Antibodies are proteins that defend our body. They attach themselves to intruders such as allergens or viruses and make them harmless. In the self-test, a line has been created with specific antibodies for a particular allergen. A second antibody in the solution is marked with carbon nanoparticles and also binds the allergen. One carbon particle on the test line cannot be seen with the naked eye, but many particles together cause the line to turn black and the test to be positive.

“The test contains all the equipment in a laboratory in miniature: it is a portable mini-lab,” says Ross. The test and the phone holder are made of translucent white plastic. The researcher made them personally with a 3D printer. “3D technology is really cool. It’s a lot of fun to draw and design something and be able to hold it in your hand within a few hours.” 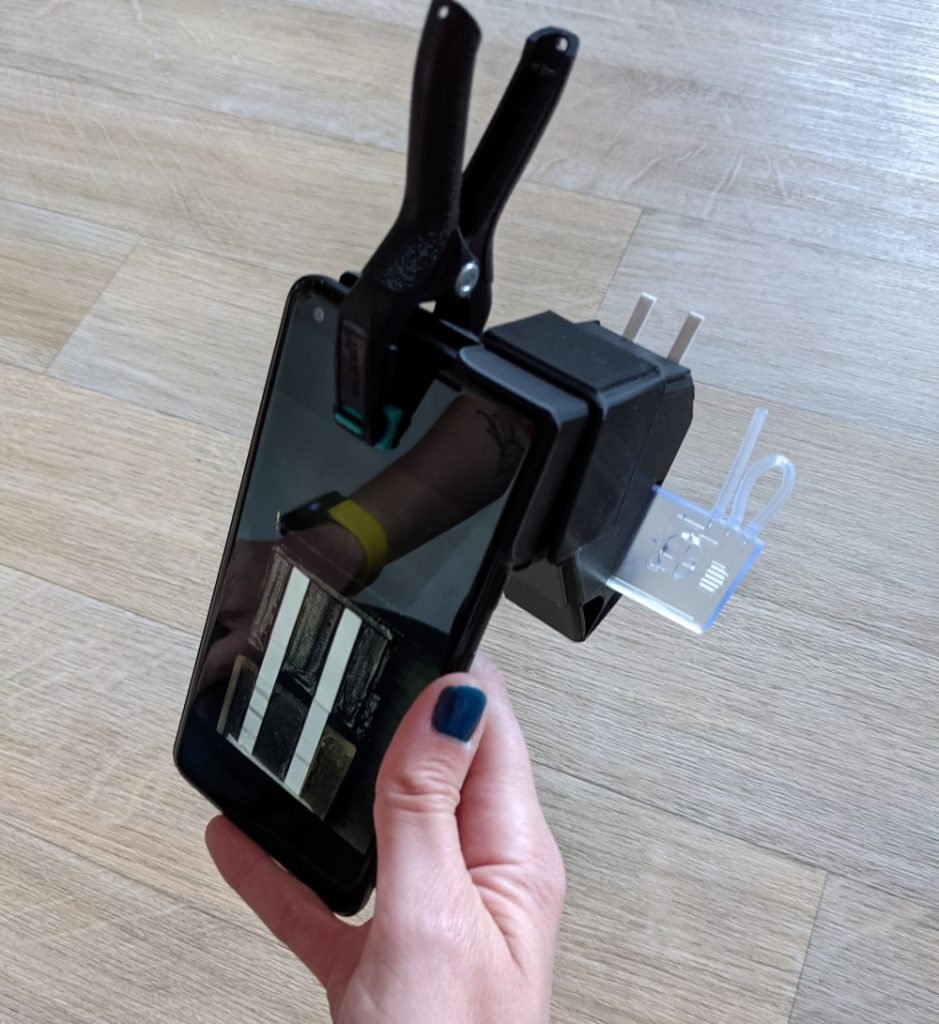 “The test contains all the equipment in a laboratory in miniature: it is a portable mini-lab.” Photo: Gina Ross.

Ross gained insight into the required techniques and knowledge from colleagues who conducted related research at Linköping University in Sweden. Her research is part of a large EU research project, https://weblog.wur.eu/essay-on-animal-farm/, in which 11 PhD candidates from different European research institutes developed tests for checking the safety and quality of food using smartphones. In addition to immunoassays with optical smartphone readouts, they used aptamers for identification and an electrochemical readout for the test.

The tests are not just for consumers: they also focus on farmers and the food industry. For example, a test was developed at the University of Belfast that allows shellfish producers to measure natural toxins in mussels, and researchers at the University of Prague developed a test for measuring pesticide residues in fruit and vegetables.

At home and on the farm

“Making this technology available to everyone by using a smartphone makes it very accessible. The great thing is that this enables us to democratise science, in particular analytical chemistry, and place it in the hands of the user. Most people no longer engage with subjects like chemistry and biology after secondary school, but unknowingly use it when they take a pregnancy test, for example,” says Ross.

She thinks there may be an increasing number of easy-to-perform self-tests in the future, such as for flu and other conditions. “People will no longer have to go to the doctor for a diagnosis, only for treatment. You can see this development is already under way with the self-tests for coronavirus.” 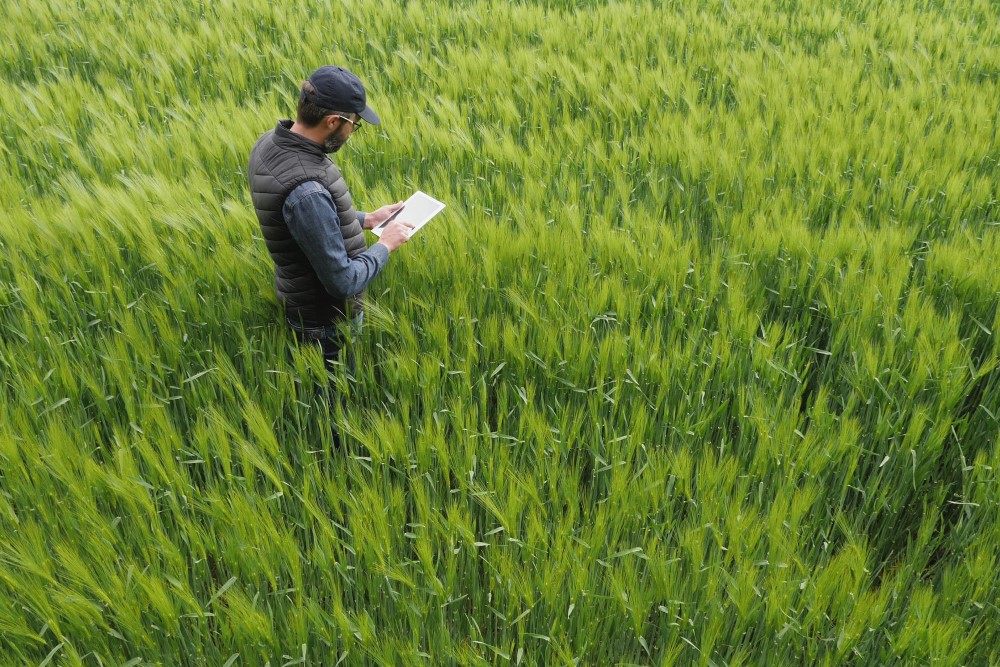 Self-tests for food safety and quality are also ideal for use by farmers and food manufacturers. Photo: Shutterstock.

Self-tests for food safety and quality are also ideal for use by farmers and food manufacturers in low-income countries. “It doesn’t require expensive and extensive lab equipment. And the technology still works well, even if you have an old smartphone. I tried it out on an old model that I have not used for a long time.”

Ross will now continue as a researcher at the Wageningen chair group Organic Chemistry. “In the EU project PhotonFood, I will develop tests to detect mycotoxins, toxins from fungi, in food. These toxins can occur in all kinds of food products, including grains.” The intention is that farmers and food manufacturers will be able to use the tests themselves.

“The tests are based on detection with a portable infrared spectrometer. Over the past few years I have been working with allergens and I am now looking forward to learning more about mycotoxins.”

how to write quotes in an essay from a book

Gina Ross holds a Bachelor's degree in Forensic Science and a Master's degree in Toxicology from Bournemouth University in the UK. She started her PhD in Wageningen in 2017. She obtained her PhD in March 2021 and then took up a position as researcher at Wageningen University. “I had already developed a test for mycotoxins for my Master’s thesis at Bournemouth University. I came up with the idea because there was so much mould in my student accommodation that it made us sick. Scientific research is creative, and I enjoy doing several things at the same time. It is very exciting to develop something new and to work on something that has not been done before.”