Climate change calls for measures to make crops more resilient against drought, disease and plagues, to ensure the food supply is sufficient for the increasing global population. Wageningen scientists have discovered the basic principles behind the CRISPR-Cas technology, which enables the precise modification of crops. Wageningen University & Research will now share this knowledge with non-profit research institutes and, in doing so, contribute to food security.

“Suppose climate change causes extended periods of drought in a certain area. If we are able to make tomato roots reach deeper into the soil with a minimal and targeted modification, tomatoes will be able to grow there in spite of the drought”, says microbiology professor John van der Oost. He is in favour of CRISPR-Cas technology, which makes plant-breeding 3.0 possible. CRISPR-Cas enables the precise modification of genetic material. “We can do great things with CRISPR-Cas. Things that benefit farmers and consumers across the globe, but in Africa and Asia in particular.”

His discovery of several basic principles of CRISPR-Cas technology, some twelve years ago, is internationally considered a huge scientific breakthrough. Van der Oost hopes his discoveries can contribute to the fight against hunger. Upon his initiative, Wageningen University & Research (WUR) and the Dutch Research Council (Dutch acronym NWO) will make five patents that cover several of his discoveries available for use.

The licences will be made available at no cost to non-profit research institutes in the domain of agriculture and food, such as the research centres that are united in the CGiAR consortium (Consultative Group on International Agricultural Research). These institutes can use the knowledge to develop improved crops, which will benefit local farmers and consumers in low-income countries.

“In times of climate change, we, as scientists, must act with responsibility. CRISPR-Cas enables us to make crops more resilient against drought, salinity and disease with relative ease. That is precisely what a world with an increasing population and changing climate needs.”

The idea of sharing this knowledge came to Van den Oost because this technology can barely be used in Europe at the moment. The EU defines all modifications in DNA that result from CRISPR-Cas technology as genetic modification. This means that CRISPR-crops are subjected to many safety tests before being released onto the market. A lengthy and costly process. Van de Oost: “And this, while small modifications made using CRISPR-Cas should be assessed in a way similar to traditional breeding techniques. It is, after all, not genetic modification.” 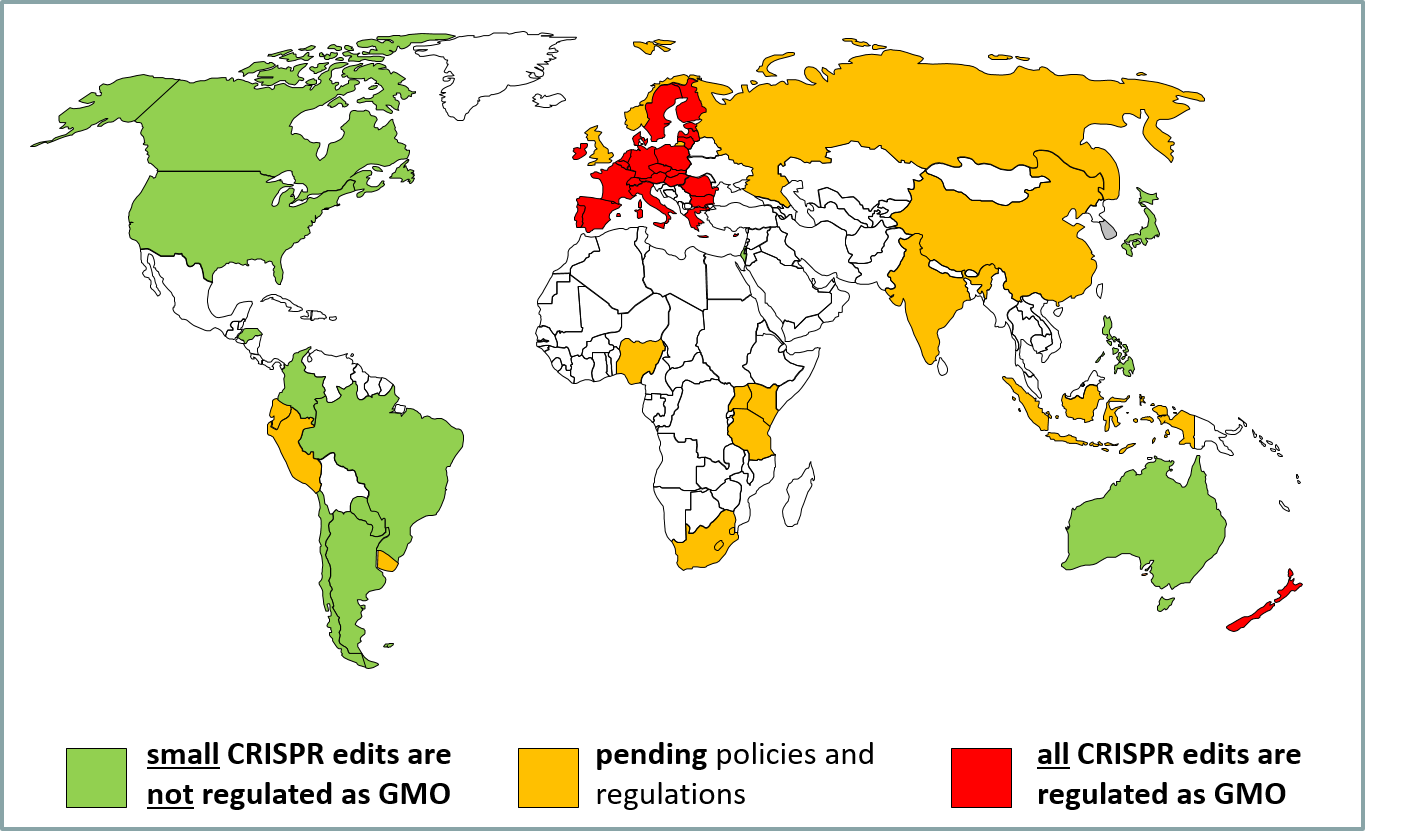 Only when CRISPR is used for extensive adjustments such as the exchange of DNA between species should it be considered genetic modification (GM) and be subjected to stringent safety regulations. “You might consider traditional breeding a chainsaw and CRISPR-Cas a scalpel, where the crops created through the CRISPR-method are equally safe.”

“People are unaware of the fact that anything you find at your local greengrocer’s is genetically altered to a great extent. Even organically grown crops have been optimised. Many of the vegetables we eat today are far removed from their ancestors that grew in the wild 2000 years ago.”

“Particularly in times of climate change, we, as scientists, must act with responsibility”

According to Van der Oost, the EU decision is unsubstantiated. “CRISPR-Cas enables us to select genetic properties with far greater precision than we have been doing through the crude methods used for thousands of years. Classical breeding is a lengthy and fairly sloppy process through which all manner of undesired collateral effects may occur.” Such as the Dutch ‘water tomato’ that was popular among growers several decades ago due to its size but had lost much of its flavour.

Countries such as the US, Canada, Argentina, Japan and Australia do not consider CRISPR-Cas genetic modification, as the minimal CRISPR changes also occur spontaneously in nature. The EU legislation causes small-scale European seed breeders and biotechnology businesses to lose their competitive edge. “The EU regulations benefit large businesses, who have time and money to spend on expensive and time-consuming testing procedures.”

“There must be another way”, Van der Oost thought. During the Christmas break of 2020, he formulated the idea of giving away patent licences for free. Het emailed WUR-president Louise Fresco, who embraced the plan enthusiastically and was actively involved in its realisation. 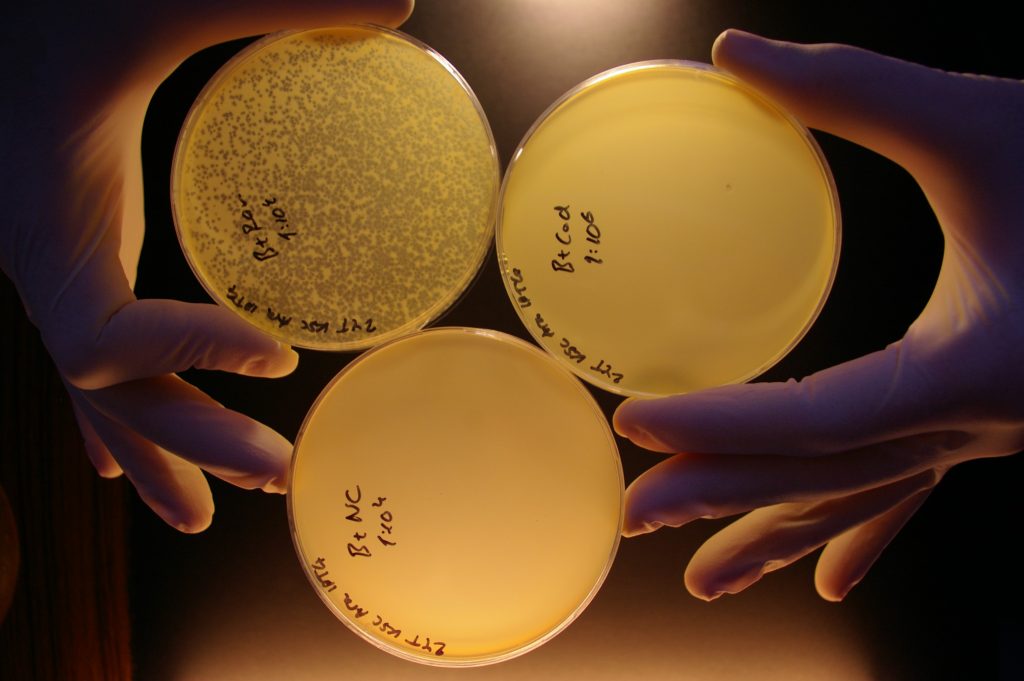 A breakthrough CRISPR experiment in 2008.

Globally, there are thousands of patents related to CRISPR-Cas. The five patents held by Wageningen are important because the CRISPR system discovered by Wageningen researchers is extremely stable and accurate.

Simultaneously, knowledge institutes and businesses across the globe are working on further research on, and development of, the method. “It is an exceptionally flexible technology that enables us to develop sustainable methods to help feed the increasing world population. We are delighted to share our knowledge for this purpose. We hope more patent holders will follow suit.”

John van der Oost received the Spinoza award in 2018 for his ground-breaking research on CRISPR-Cas technology. This is the highest scientific award in the Netherlands. "I am aware that we must take care not to promise too much, but if we aim to provide the increasing world population with sufficient food on a planet with a rapidly changing climate, we must move full-steam ahead to improve crops rapidly, precisely and safely."