Mass tourism threatens coral reefs in tropical seas. Waste and sewage from hotels and cruise ships are released into the sea. But, tourism is also a source of income, and can thus help in protecting nature. Wageningen biologists, economists and sociologists develop a method to determine the correct balance between tourism and nature conservation. In the Dutch Caribbean and South-East Asia, they study how marine life responds to changes, and seek solutions in collaboration with local partners. How do you think tourism may contribute to nature conservation?

“There are plenty of places across the globe where nature has been lost due to tourism. Tour operators, NGOs and civilians, are eager to prevent this tragedy from befalling their area. That is a hopeful thing.”

Over the past few years, the number of tourists visiting Raja Ampat has increased substantially. The sea surrounding the Indonesian archipelago is a veritable scuba diving paradise, rich in a large variety of fish, corals and other marine creatures and plants. ‘This area has the world’s highest level of biodiversity, and is thus promoted actively for diving tourism, including billboards on Amsterdam central station’, marine biologist Lisa Becking states. While the marine nature reserve sold 900 diving licences annually in 2007, this number had risen to 30,000 last year. 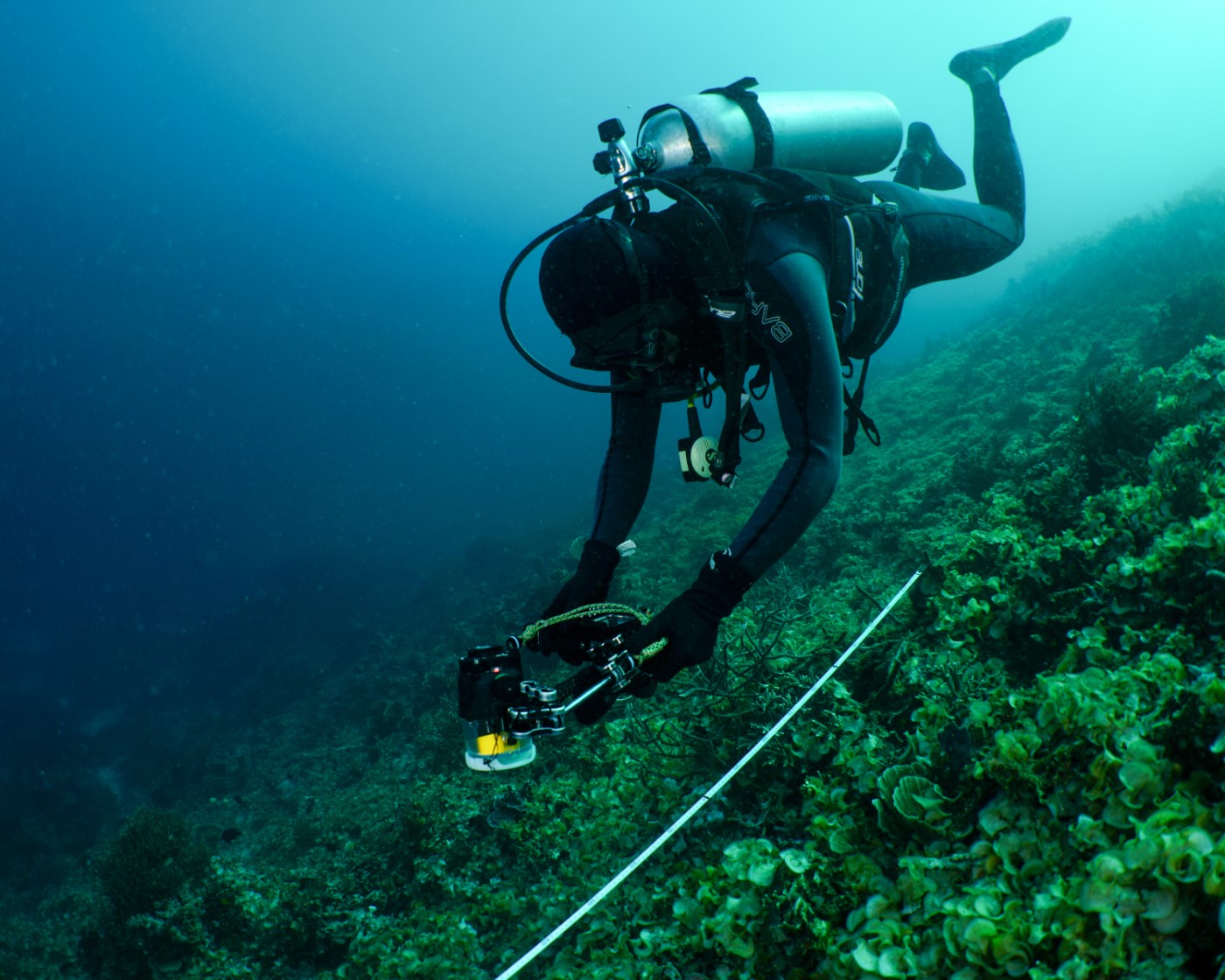 Tourism has stagnated due to the global corona pandemic. ‘Videos shot by colleagues there, show that fish, giant oceanic manta rays and sharks are returning to Raja Ampat in large numbers. Simultaneously, however, the economic viability of the park seems to be disappearing now that the revenues from tourism have dried up. If this continues, there is a considerable chance that large-scale fisheries or mining will develop in the area’, says Becking.

Becking visited the area at the beginning of 2020. There, she works with Indonesian and Dutch colleagues to study the optimal equilibrium between tourism and nature conservation. She conducts similar studies in other areas of Indonesia and the Dutch Caribean. ‘The main question is what effect tourists have on the marine ecosystems, and on the humans on dry land that depend on fisheries or tourism for their income.’ 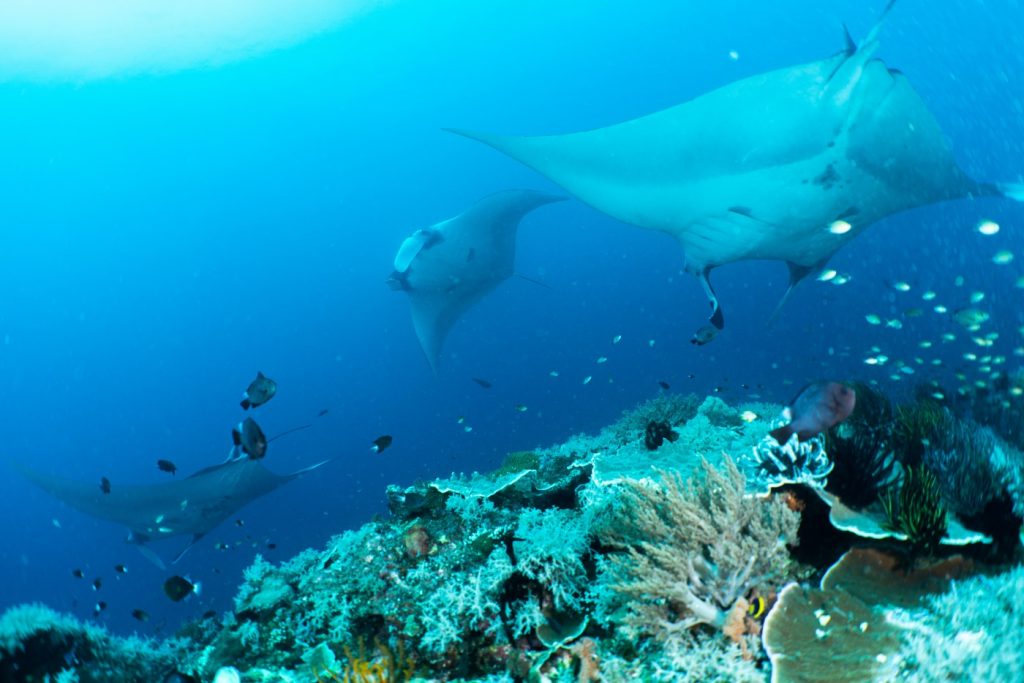 A marine ecosystem. What effect do tourists have on such systems? (Credit: A. Ahmad)

Tourism can be useful to conserve nature. Marine parks fund their maintenance with income generated from the sale of entry tickets and diving licenses. Moreover, there is a system of informal monitoring of where and when tourists go. ‘Many beautiful reefs are located in the middle of nowhere, and the government lacks funds and resources to patrol everywhere. Marine life is protected in those areas that tourists like to visit’, Becking states. In those areas, there is no fishing with homemade bombs and sharks are not hunted and gruesomely killed for their fins.

At the same time, mass tourism can damage nature. Unpurified sewage water and plastics from resorts and cruise ships transporting thousands of guests are released directly into the ocean. ‘Most of these beautiful islands have a primitive or entirely lacking water purification system. The sewage is dumped directly into the sea or in a cesspit through which it seeps into the porous limestone to end up in the ocean’, Becking explains. 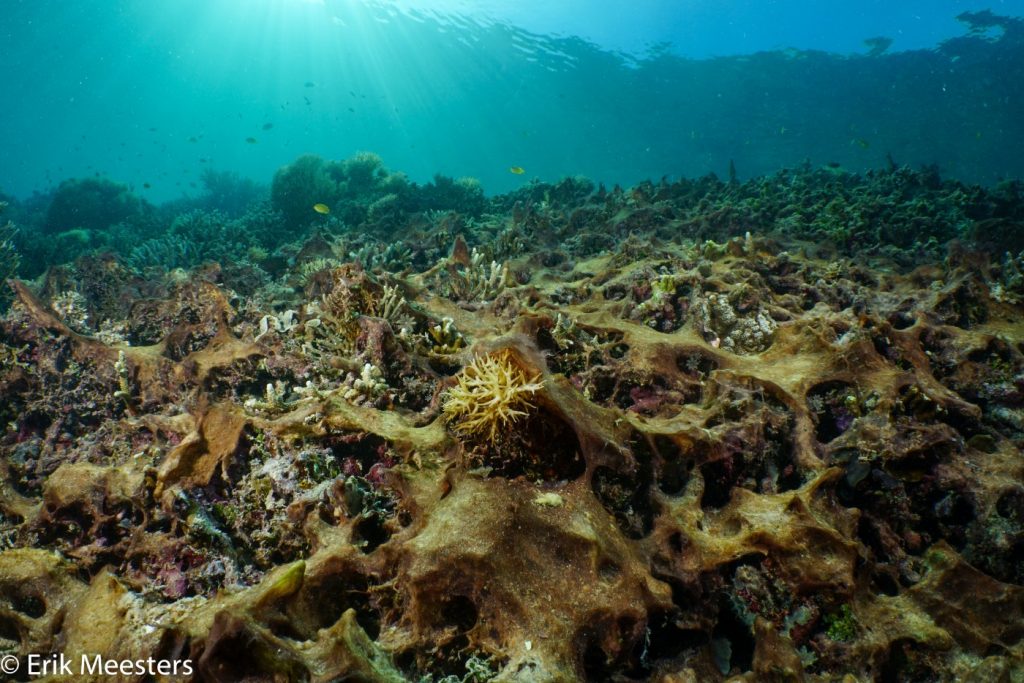 Coral reefs are under threat from global processes such as climate change and local issues like pollution (Credit: Erik Meesters).

‘This leads to fertilisation of the coral reefs, resulting in access of algae and bacteria. Not very good for public health either.’ The scientists seek low tech and affordable solutions to purifying sewage water. Tourists also have a responsibility, for example by inquiring after the water purification at their hotel.

Coral reefs are under threat from global processes such as climate change. Furthermore, local issues such as overfishing and pollution can weaken ecosystems. ‘If we are able to remove or reduce the local impact, the reefs may become sufficiently resilient to cushion the effects of climate change. It may at least buy some time’, the marine biologist says. ‘Moreover, the coral can restore itself more easily. It’s just like humans: if you are fit, you can more easily recover from sickness.’ The coral reef is a dynamic system; she continues. ‘We must let go of the idea that a reef can handle a fixed number of vessels and tourists. This differs widely per location, and even that can change over time. We want a better insight into this dynamic.’ 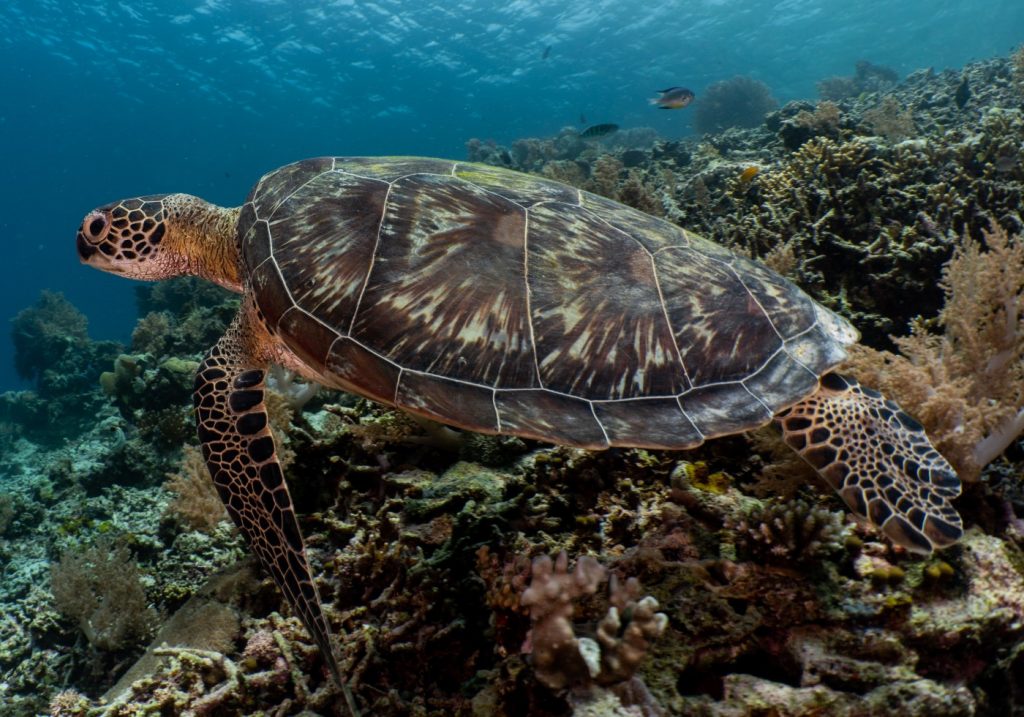 A turtle swims in coral reefs, but its ecosystem could be threatened (Credit: A. Ahmad).

Nature conservation requires collaboration between scientists from a wide variety of disciplines, according to Becking. Thus, she works in a diverse team of biologists, economists, sociologists and other experts from Wageningen and Twente and local universities. ‘We consider both ecological and social factors. This helps us to understand what processes steer the ecosystem’s resilience.’

The biologists map how the biodiversity underwater responds to change. Experts in currents study the way the current flows and how this affects waste streams and specific reefs. Sociologists study how the development of tourism contributes to the local populations’ income and how it impacts social cohesion and how policymakers can best respond.

Becking conducts her research in marine nature reserves in Bali, the Moluccas, Raja Ampat and the Dutch Caribean. ‘These parks differ in their tourist development. Bali is leading in tourist numbers’, Becking explains. By studying a variety of nature reserves, the researchers hope to identify what prerequisites are required to allow sustainable tourism. ‘Ultimately, we want to know how the marine nature reserves’ policies can fortify both the resilience of the ecosystem and the local economy against impacts such as periodic fluctuations in water temperature or tourist numbers.’ 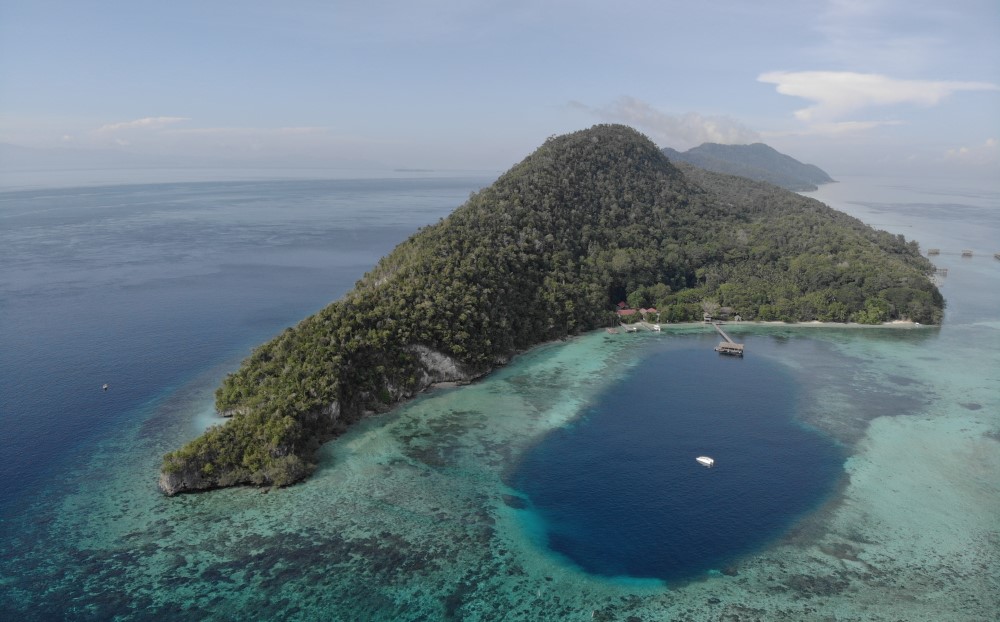 This is not the extent of the researchers’ efforts. They also contribute to solutions, in collaboration with the marine nature reserves, hotels, governments, NGOs and local communities and universities, for example, by demonstrating how plastics and nutrients spread and move through the water. And, by mapping how different factors affect each other and what factors the governments should take into account in their policies.

‘Everyone appears to recognise the issues and to feel there is still room to intervene. That is positive. There are already plenty of places across the globe where beautiful nature has been lost due to tourism. Tour operators, NGOs and civilians, are eager to prevent this tragedy from befalling their area. That is a hopeful thing’, Becking concludes.

Lisa Becking is a university lecturer Tropical Marine Biodiversity in Wageningen. Following her Masters in Biology in Amsterdam, she obtained her PhD at Leiden University and Naturalis Biodiversity Center in 2012. She is currently a member of the KNAW Young Academy and writes columns for De Volkskrant. ‘I am fascinated by the diversity of marine life. This fascination motivates my research on biodiversity and the evolutionary and ecological processes on which it rests. I enjoy working on complex issues in diverse teams of scientists.’