The environment, climate, and our health are often secondary to the way we produce, trade, and consume food globally. In preparation for the UN Food Summit in 2021, Wageningen scientists outline concrete pathways towards a sustainable and fair food system. They also call for an international food and agricultural agreement with shared objectives, similar to the Paris Climate Agreement. This will support countries in their joint effort to ensure that the growing global population has a healthy and sufficient food supply.

The United Nations (UN) global Food Systems Summit will take place in September 2021 or later, depending on the coronavirus pandemic. “The food system concept has been a hot topic over the past few years. The interactions between governments, food producers, businesses, and citizens determine what the food system looks like in a particular country. How do food manufacturers and consumers handle food waste? How does the trade system work? What type of policy is implemented by governments and trading blocs such as the EU? This is an incredibly complex issue. Yet, it is also a very holistic way of looking at food,” says agronomist Eric Smaling.

Smaling is working with colleagues on a scientific report that will provide knowledge and inspiration for the UN Food Summit. This report will contain information about food systems throughout the world and the way in which they can be made more sustainable, healthier, fairer, and resilient enough to survive the impact of climate change. “Doing nothing is not an option. By 2050, there will be around ten billion people who will need food. The impact of climate change, hurricanes, droughts, floods, forest fires, and locust plagues, etc., is already noticeable, but will become more severe and more extreme.”

“In the report for the IFAD, we plot specific pathways towards sustainable, healthy, and fair food systems. These pathways are based on scientific research and must be feasible. Governments require guidelines on which they can base their policies.”

In 25 articles, scientists have described ways of ensuring that food waste becomes a thing of the past, people create healthier food habits, nature is better conserved, and food production does not come at the expense of soil life, clean water, and clean air. These articles have been written by experts from different science groups in Wageningen and other universities as well as knowledge institutions from across the world.

The articles form the basis of the biannual report published by the International Fund for Agricultural Development (IFAD), one of the UN organisations focused on food and agriculture. As project leader, Smaling is responsible for the IFAD report.
“We envisage three main objectives for food systems,” he says. The first is health and nutrition; the second is sustainability and resilience. The third main objective is inclusion – this relates to the fair division of labour and income between, for example, the young and old, men and women, local people and migrant workers. “Those are the key points that we must monitor. You may be able to produce a lot of food but at the same time deplete the soil or exacerbate climate change as a result of greenhouse gas emissions. These are the trade-offs.” 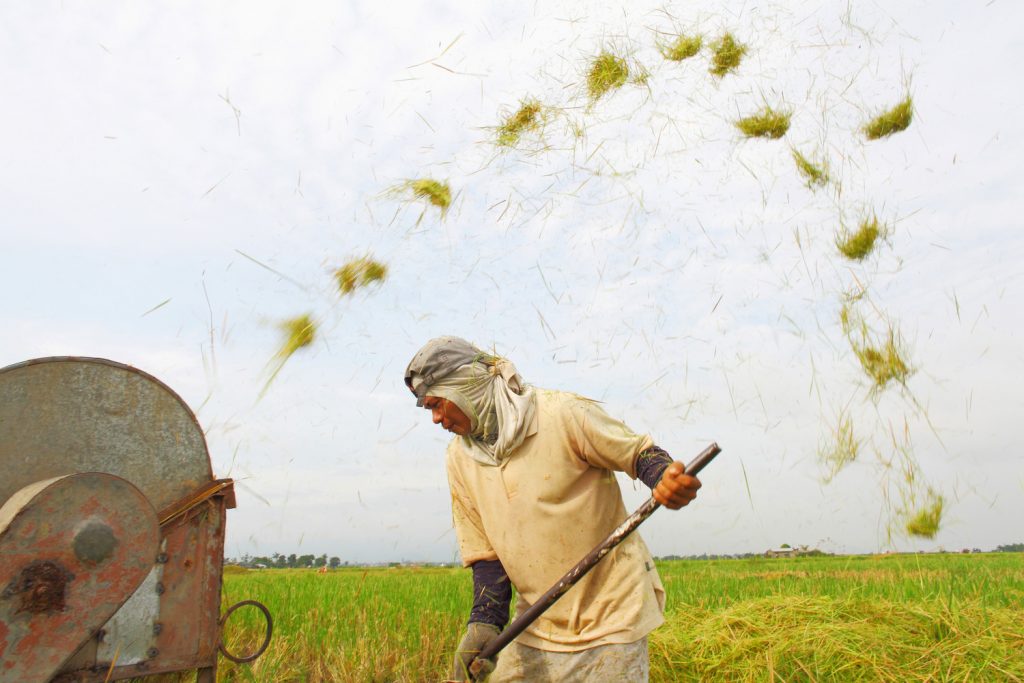 It is essential that we find the best improvements with minimal trade-offs. Countries could switch to circular agricultural systems where animals are fed by crop residues and grass, without the need for growing grain and other crops specifically for animal feed. That would mean that we keep fewer animals. “We could start eating more vegetable products and make more conscious choices between certain groups of animals. Chicken is far less harmful to the environment and our health than beef. And the consumption of farmed fish that is fed by food waste streams has advantages over the consumption of land animals.
Overall management of what we produce, trade, and eat is often lacking,” says Smaling. “For the most part, food is market-driven. But if you want to manage something, you cannot just leave it to the market. At a certain point, there won’t be a choice but to change course.”

There is no awareness of the actual cost of our food. The cost of environmental pollution and the degradation of biodiversity are not included in food prices, nor is the use of heavy oil for shipping. Unhealthy and processed foods are often cheaper than fresh fruit and vegetables. “Hunger, malnutrition, and obesity are occurring at the same time. The number of people with type 2 diabetes and obesity is growing fast. This comes with high health care costs.”

Furthermore, farmers often do not earn a lot of money for the food they produce. In the Netherlands, the farmers do as they are told by the supermarkets who pay the farmers the absolute minimum. A similar mechanism is at work in global trade. Western companies buy bales of cocoa and raw cotton at low prices from poorer countries, which they then process in their own countries. This way, businesses add a lot of value to products and make a lot of money.
When poorer countries start processing their own raw materials and subsequently start to export bars of chocolate or clothes, they are hit by high import levies from Western countries and the EU. This makes processing and export unappealing to poorer countries. “If you strive for fair trade, then you must work towards different trade relations. It is a redistribution issue as well.”

Food systems are intertwined on a global scale. “When a country wants to implement improvements, it cannot do so on its own. Countries and governments must work together,” says Smaling. This is why Smaling and his colleagues are calling for a similar approach to that taken for the Paris Climate Agreement. “In this way, you create a legal basis on which countries can base their policies. It might be easier to reach an agreement on agriculture and food than the Climate Agreement as the options are far more tangible.” 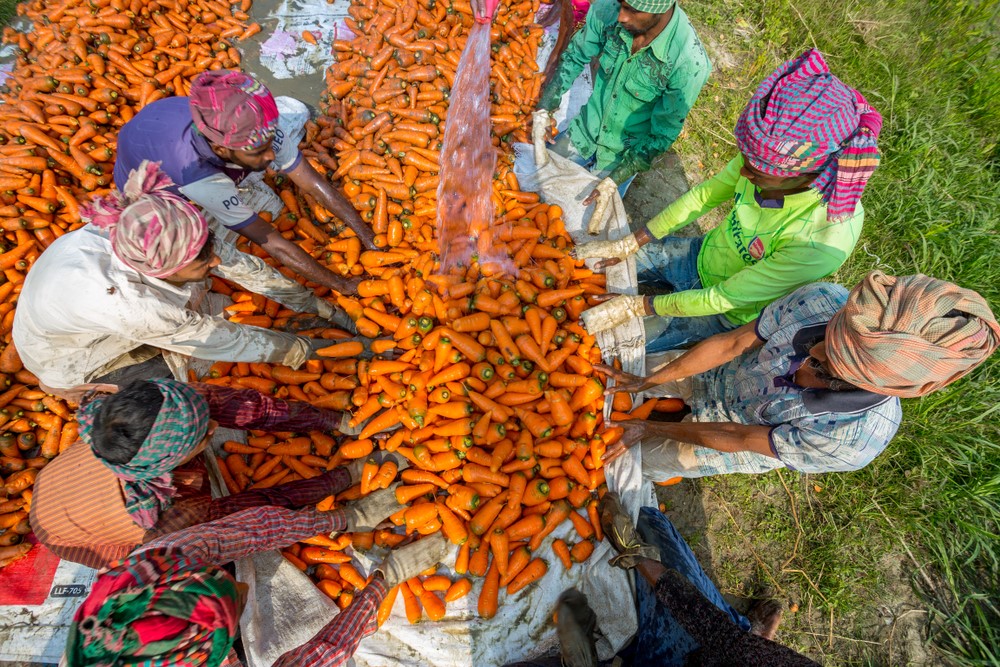 Farmers are use their hands to clean fresh carrots after harvest (photo: Jahangir Alam Onuchcha / Shutterstock.com)

Countries, governments, and trade blocks such as the EU can outline policies and use tools such as laws and regulations, grants, and taxes. This could include lower VAT rates for fruit and vegetables and higher rates for red meat and processed food.
“We must also get the consumer on board, for example through campaigns highlighting the origin of food. Without pointing the finger, you can inform people of why it would be better to eat more vegetable products instead of meat every day.”
We also need to make significant strides in the area of waste treatment and optimal use of residual streams and nutrients, Smaling explains. “This would have the advantage of creating jobs as well. New circular systems also amplify the demand for knowledge about food safety.”

An international panel for agriculture and food, comparable to the Intergovernmental Panel on Climate Change, could support the countries that sign a future agriculture and food agreement with current scientific knowledge and insights. Smaling expects that the scientists will also include the recommendation for an international food agreement in the report for the IFAD.
“In the report, we plot specific pathways towards sustainable, healthy, and fair food systems. These pathways are based on scientific research and must be feasible. Governments require guidelines on which they can base their policies.” The researcher says that working on the report is a fantastic challenge. “It means looking for the balance as well as nuance. You have to look at what is possible where, and for whom. A different organisation of food systems may yield more gains than losses, perhaps not in our wallets, but for the environment and our health.”

After studying Soil and Fertilisation at Wageningen, Eric Smaling received his PhD for research into managing soil fertility in Africa. Until 2012 he worked on his scientific career, from 1998 as professor of Soil Science at WUR, and professor of Sustainable Agriculture at the University of Twente. He was also active in the Senate and House of Representatives for the SP party. In 2017, he returned to Wageningen. “This is where my academic career started. Internationally, WUR’s efforts are of enormous importance, also because it teaches so many people and equips them with broad knowledge. I think of myself as privileged and want to help improve things in the world. I was only fifteen when I first dove into development cooperation. I think it is important that we leave the planet in a good condition for humans, plants, and animals.”