Large farm fields harbour few insects and birds, as a result of single-crop farming. Wageningen researchers collaborate with farmers to conduct tests with a variety of crops in narrow strips, which attracts more insects that combat pest insects and slows the spread of disease. The yield is of a similar volume as a monoculture, and it requires a comparable amount of labour. Insects, birds and farmers benefit from more nature in their fields.

‘Farmers need to see it to believe it’, says Dirk van Apeldoorn, Crop Diversity researcher. He has been studying strip cropping since 2014. Strip cropping is a form of cultivation where different crops are grown in adjacent strips. The test results are convincing. ‘This year, over twenty farmers have started or expanded strip cropping’, says Van Apeldoorn. This number includes regular and organic farmers in equal numbers.

Chicks in the grain

‘Farmers using this method see more birds in their fields, even when growing crops that don’t normally harbour these species. Birds hide their young in the grain, and forage for food in the cabbage’, Van Apeldoorn explains. His testing plot in Wageningen attracts many grey partridges. ‘We started a study on birds at farms this year, as we are eager to learn whether strip cropping attracts more birds, and if so, what kind. In addition, we want to know whether birds can breed and whether their young survive.’ The researchers also map what flowers, insects and small mammals such as hedgehogs and mice live in these fields, in comparison to mono-cultivated fields.

The first extensive strip cropping experiments were conducted in 2014, following the start of a collaboration with ERF BV in the Flevopolder, the largest organic arable operation in the Netherlands. Van Apeldoorn: ‘We started by growing different potato varieties next to each other. This proved technically possible, and the following year we sowed strips of flowers in combination with peas.’ 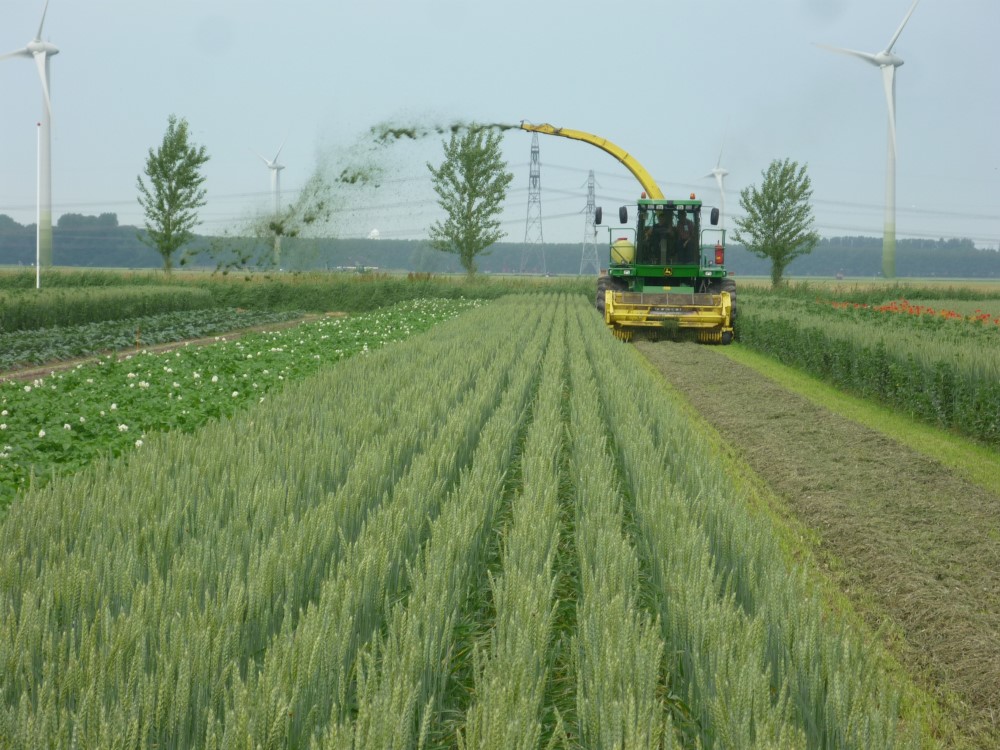 Strip cropping does not require additional labour input, and the contractors hired by the farmers charge the same fee for a strip cultivated field as for a field containing just one crop (Photo credits: Wageningen University & Research).

The strips are planned using a GPS system with which tractors are equipped. For example, a strip of grass, a strip of cabbage, a strip of a different crop, and so forth. ‘The GPS logs the exact location of each crop. This information is then used in the tending of the crops, and is also useful for administrative purposes.’

Strip cropping does not require additional labour input, and the contractors hired by the farmers charge the same fee for a strip cultivated field as for a field containing just one crop, the researcher states.

Following the first positive experiments, an extensive study on strip width started in 2017 at ERF. On their own testing plots, researchers work with a 3-metre wide strip. But large farming machines often work in strips of 6 metres wide or more. ‘It turned out that strips of 6 metres wide are just as efficient as strips of 12 or 24 metres’, Van Apeldoorn declares.

In this video (in Dutch) by the WWF, Dirk van Apeldoorn discusses the potential of strip cropping

‘Studies by other scientists show that very narrow strips of 1 metre increase the yield by 25 per cent because the crop benefits from more light and improved soil life. With wider strips, only the outer plants benefit, which means the harvest is as large as it is in monocultures.’

The advantage of strip cropping is that strips of up to 6 metres in width curb the spread of diseases, such as the potato disease phytophthora. ‘You could compare this to the social distancing measure during the corona outbreak’,  Van Apeldoorn clarifies. Furthermore, insect pests occur less frequently. ‘The strips attract more crawling insects and spiders, as well as flying insects such as parasitoid wasps and hoverflies. This combination is effective in fighting pest insects such as aphids and caterpillars.’ 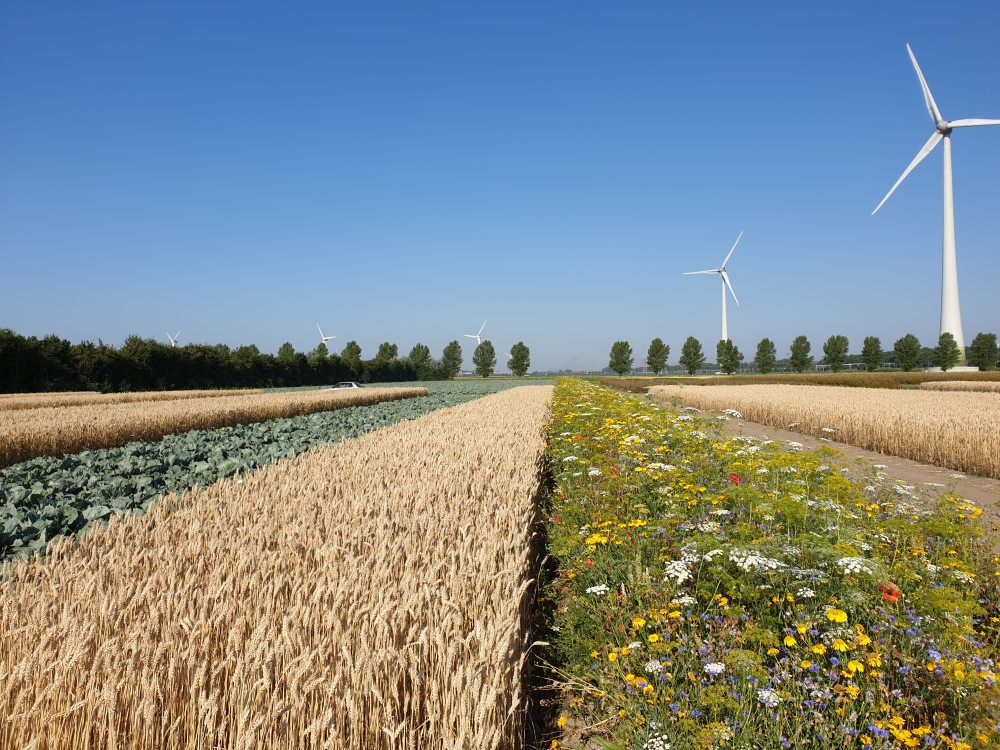 The advantage of strip cropping is that strips of up to 6 metres in width curb the spread of diseases. Furthermore, insect pests occur less frequently (Photo credits: Fogelina Cuperus).

In 6-metre wide strips, more insect species use both crops. ‘The students that counted the insects registered intensive traffic of insects between the strips, over ten ground beetles a day per edge. The ground beetle is a nocturnal creature, which rests in the grass-clover during the day, and hunts aphids and caterpillars at night.’

Cultivating a single food crop on a field increases the risk of pests. The size of the field is also a relevant factor. ‘On a large field measuring 20 hectares, the hoverfly, whose larvae eat aphids, is unable to bridge the distance.’ Increasing the crop variety makes the field a more attractive habitat for many different insects and creates a natural balance. This not only benefits organic farmers, Van Apeldoorn stresses. Current farmers have fewer pesticides available. The EU, for example, has banned the use of neonicotinoids in open fields. ‘These were used in, among others, sugarbeet fields because this crop attracts many aphids. Our research shows that the number of aphids decreases significantly if the crop is combined with barley.’

Van Apeldoorn considers strip cropping a transition technology. ‘The entire system, from the seed supplier to the buyer in the supermarket, is focussed on farmers cultivating just one crop. All machines, methods and seeds are made for monocultures. Breeders develop varieties that do well when surrounded by similar plants. Varieties used in strip-cropping should be more competitive,’ the researcher exemplifies. His aim is the future use of “pixel cropping”, where crops are surrounded by other plants that are mutually beneficial, and where only ripe crops are harvested, leaving the rest to ripen. 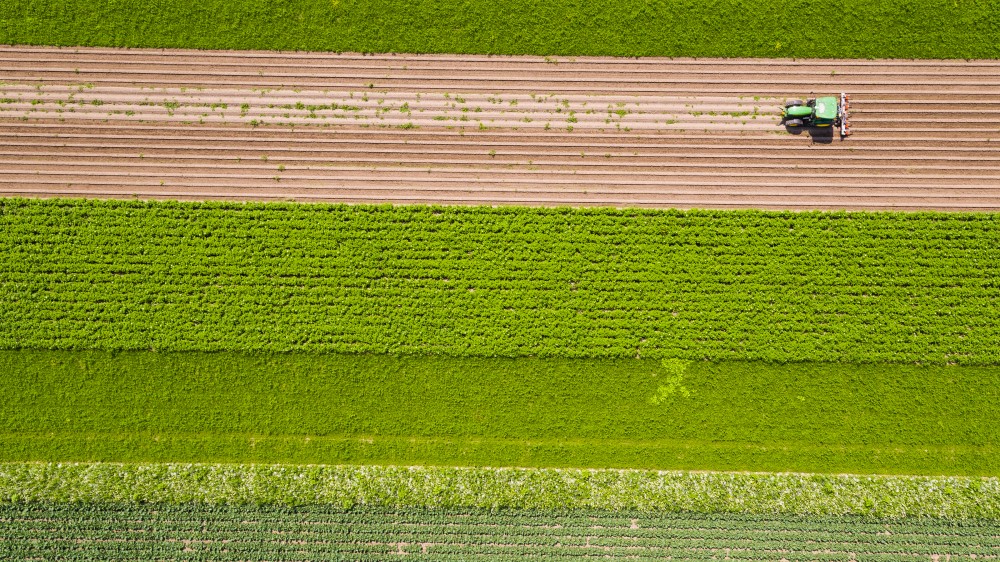 ‘Farming is more than just producing huge amounts of a crop. This realisation is growing within society. Both farmers and consumers enjoy a varied landscape with many animal and plant species,’ Van Apeldoorn feels. There is a growing interest in strip cropping. ‘Zeeuws landschap An environmental foundation, states that strip cropping is a prerequisite for land tenancy.’ The steep decline in the population of animals and plants in the Netherlands demonstrates the urgency of stimulating diversity in species in rural areas. Farmers using the strip cropping methods are all enthusiastic, Van Apeldoorn stresses. They are particularly thrilled by the return of birds. ‘The joy this brings farmers is priceless.’

International Day for Biological Diversity
The United Nations (UN) has decreed 22 May as International Day for Biological Diversity. Wageningen University & Research conducts a lot of research on biodiversity. ‘Many animal and plant species are experiencing difficulties. There is tension between the use and preservation of nature’, Reinier Hille Ris Lambers, programme leader Biodiverse Environment, states. ‘The importance of biodiversity supersedes individual plant and animal species. It is a prerequisite for our well-being. We are hitting the limitations of both nature and the current economic models. This is why a transformative change is needed: a fundamental change in society and the economy.’
Wageningen collaborates with governments, conservation organisations, businesses, civic initiatives and knowledge institutes towards nature conservation. For example, in local initiatives such as Groene Cirkels and the national Biodiversity Delta plan. On a European and international level, Wageningen does its part in research and governance, such as through its contribution to the UN panel for biodiversity IPBES. Hille Ris Lambers: ‘Through collaboration, we foster mutual understanding, which helps us improve. Maybe, we ourselves even change.’

how to write an essay on my cultural identity

Dirk van Apeldoorn is affiliated to the chair group Farming Systems Ecology, and the Field Crops applied research department. He studied Tropical Land use in Wageningen and obtained his PhD researching the resilience of farming systems in 2014. As a researcher and teacher, he advocates biodiversity in agriculture.
‘My work is very varied, from theoretical to interacting with farmers. It is wonderful that I am able to help generate change through my research. You can really see the landscape change. And once farmers start, their enthusiasm grows.’