Robot and human harvest together

Farmers aim to decrease the use of herbicides. But, there is insufficient labour available in both conventional and organic farming to remove weeds and harvest by hand. Wageningen researchers develop self-learning robots that pull weeds and harvest with increasing skill. Since humans and robots will likely increasingly work together in the future, they also consider the ethical issues this collaboration poses. Do you think a robot should work in the same way a human does?

When a robot completes a task successfully, it is stored with a smart mathematical rule as “+1”, and if the task failed, as “-1”. This is similar to the way dogs are rewarded with a treat, Ard Nieuwenhuizen agrees. The agro-food robotics researcher works on developing self-learning robots for farming applications.

“Within a few years, we can teach robots various tasks such as weeding and picking fruit. But the question remains to what extent society is willing to accept technology in our food production systems. It took quite a while before milking robots became widely used.”

‘The same principles that Facebook or Google use in facial recognition or photo classifications are applied to recognising weeds’, Nieuwenhuizen explains. Robots can learn to identify weeds in different stages of growth both in daylight and during the night using smart mathematical principles or algorithms. 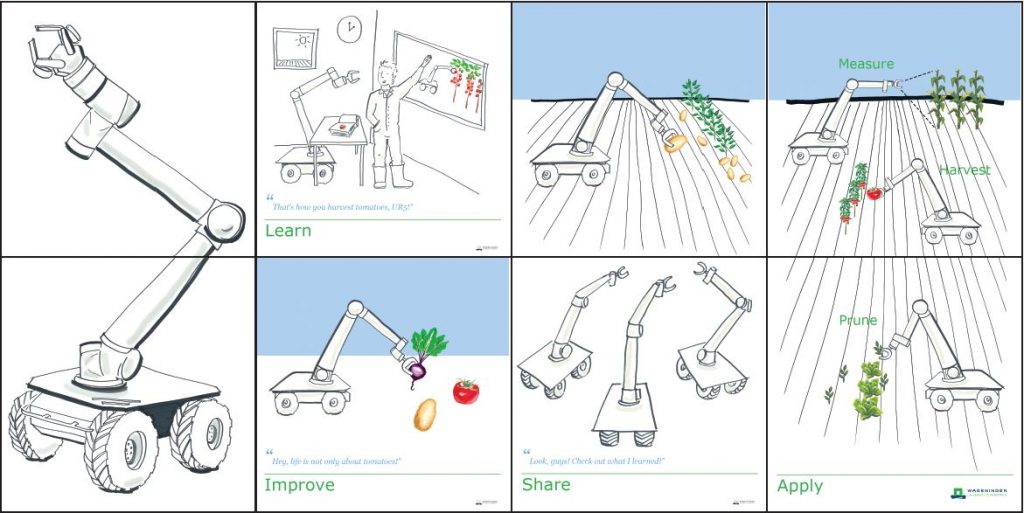 ‘Within years we will be able to teach robots different tasks, such as weeding and harvesting fruit’, Nieuwenhuizen expects. Deploying farming robots is necessary. Farmers with conventional farms are increasingly prohibited from using traditional chemical herbicides. At the same time, there are fewer labourers available to carry out the labour-intensive seasonal work. Organic farmers also have trouble finding sufficient labour.

Manually weeding and picking apples and pears is no longer always possible. ‘Sometimes, entire harvests are lost. This is an issue not just in western Europe, but also in California and regions such as Australia’, according to Nieuwenhuizen. An added advantage to robots is that the quality of their work is consistent. ‘It makes no difference whether it is Monday morning or Friday afternoon.’

Experiments with robots are already being conducted on the Farm of the Future in Lelystad. For example, a farmer tests a hoeing robot that keeps his lettuce field free of weeds. ‘In our research, we try to take it one step further. Since arable farming and fruit farming relies on seasonal labour, it is more efficient to design robots capable of performing multiple tasks’, Nieuwenhuizen states.

For example, a robotic arm capable of picking both apples and bell peppers. ‘The apples are plucked with a twisting movement to break the stem. The stem of a bell pepper, on the other hand, must be cut. We can teach the robot system these different movements.’

Nieuwenhuizen and his colleagues also conduct fundamental research on the different ways a robot learns movements. Humans are restricted due to their anatomy, but robots have the option of doing things differently. Still, mimicking humans is the best option at this time. In just a few years, robots and humans will work side by side in food production, Nieuwenhuizen expects. ‘First, there will be an intermittent phase. Everything in agriculture, such as paths in the fields, is designed for our current working methods involving humans. That cannot be radically changed overnight.’ 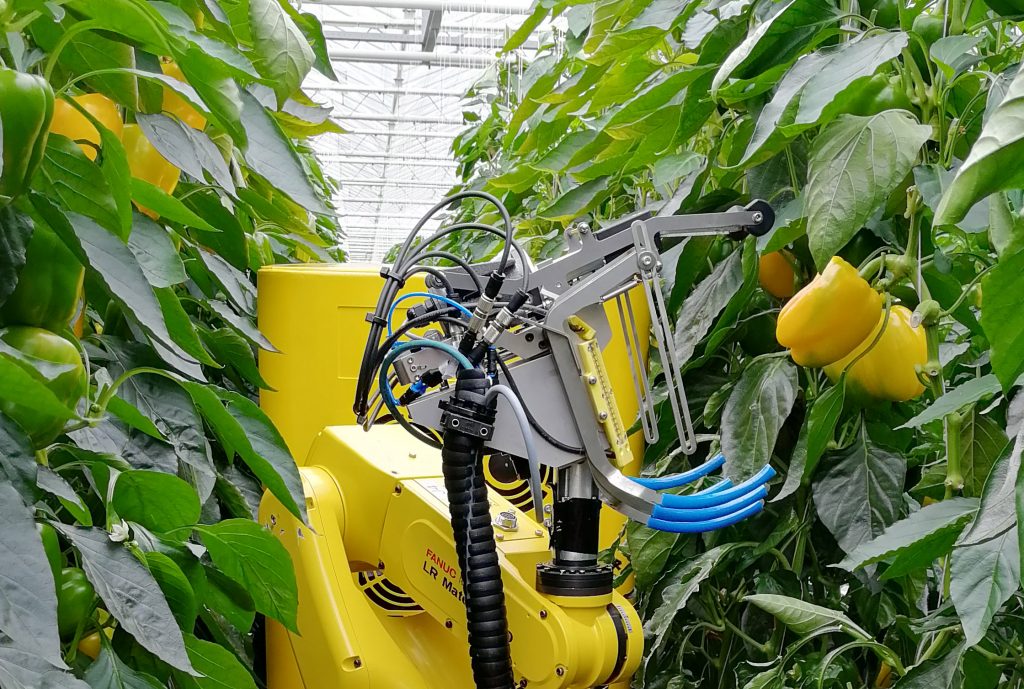 There is also the issue of how people will respond if they have to work with robots that are faster, more accurate, and more efficient. Entrepreneurs must also know how to deal with robots. ‘It took quite a while before milking robots became widely used’,  the researcher indicates. And the question remains to what extent society is willing to accept technology in our food production systems. Social scientists occasionally collaborate in Nieuwenhuizen’s and his colleagues’ research to explore ethical issues.

‘In human society, we have developed a system of values and standards with regard to, for example, how we behave in a living environment. We expect robots to perform their tasks in the same way, but a robot doesn’t see birds and insects in the same way we do’,  Nieuwenhuizen says.

But can’t you teach a robot this? ‘Indeed, you can. We are likely to accept robots sooner if they display human behaviour. This is illustrated by care-robots that are equipped with a human face.’

After completing his masters in Biosystems Engineering in Wageningen, Ard Nieuwenhuizen obtained his PhD in 2009 on research on the identification of weeds between sugar beets. Immediately after receiving his degree, he was employed by Wageningen Plant Research, where he still works. Nieuwenhuizen spent five intermittent years working in the private sector on the development of automatic and self-driving farming vehicles. ‘I want to contribute to an excellent food supply in a healthy world. Healthy meaning a world in which the soil doesn’t dry out, and the grass is not affected by herbicides. All living things adjust to the environment. It is precisely that diversity and unpredictability in nature that makes developing technology so much fun.’