The climate on your street

Climate change is causing the Netherlands to experience prolonged periods of drought, heat waves, and heavy rainfall more frequently. Together with other research institutions, Wageningen researchers have created the Climate Impact Atlas, which shows the consequences your street or region is set to face in 2050. The atlas shows, for example, where there is an increased risk of flooding, the risk of natural fires is double, and the wind chill will increase by three degrees. Are you interested in the impact of climate change on your street?

It is no surprise that the prolonged periods of drought that we are seeing in our country as a result of climate change pose a major problem for nature and agriculture. If the Netherlands does not do more to capture river water and rainwater, the groundwater level will continue to fall in the long term. In the west, this presents a threat to the foundations of existing dwellings built before 1975, many of which are built on wooden piles. “If these become partially dry when the groundwater level drops, they will rot,” says Tim van Hattum, Climate programme leader.

“The Climate Impact Atlas shows that the impact of climate change is significant and that adapting our country to this must be a top priority.”

At the same time, the likelihood of rivers flooding and possible dike breaches is increasing, as is the likelihood of flooding caused by heavy rainfall. “We are starting to feel the consequences more and more. The streets and the railway line in Bunde, my home village, were flooded by heavy rainfall on 29 June 2021. 80 mm of water fell in just a few hours. This is what you would usually see over the course of a month.” It primarily concerns extremes, Van Hattum emphasises. “Climate change intensifies the extremes.”

The already hard-hit nature in the Netherlands particularly suffers from drought and longer summer heat waves. More trees, plants, and animals will die. The risk of natural fires is also on the rise. “We are already seeing this. We saw the largest wildfire ever to rage in the Netherlands in 2020 in Deurnse Peel. But the risk of wildfires will double by 2050.”

Working Together on the Climate Impact Atlas

Wageningen University & Research took the initiative for the Climate Impact Atlas over a decade ago, at the request of the provinces. It has since grown into a collaborative project involving the KNMI, Deltares, Rijkswaterstaat, the Deltaprogramma, Amsterdam University of Applied Sciences, and other partners. De Stichting manages the Climate Impact Atlas and ensures that the information is kept up to date.

These and other impacts of climate change can be found in the online Climate Impact Atlas. The main themes are waterlogging, drought, heat, and flooding, and it shows right down to street level what we are likely to experience in 2050 as a result of global warming. “You can look at the consequences for the Netherlands as a whole, but also zoom in on parts of the country, areas, and even streets,” Van Hattum explains. It is also possible to look at several effects at the same time such as the effects of subsidence and salinisation, two phenomena that occur together in the western and northern parts of the Netherlands.

The atlas is constantly being updated and expanded. Recently, new map images have been added, such as for subsidence, the risk of wildfires, and wind chill. “The ‘feels like’ temperature could rise to 3 degrees by 2050. That would be particularly unpleasant during hot periods. It is therefore important to bring greenery into the cities and to create lots of shaded areas.”

Up to 170 billion in damages

According to Van Hattum, the Climate Impact Atlas is an important tool to make people aware of the urgency of the climate crisis. “The atlas shows that the various impacts of climate change are significant, and that we must do all we can to minimise the effects and to properly prepare our country for the changes. Both should be top priorities,” explains the programme leader. He continues, “We have to make sure that we stay in the moderate/low climate scenario. Otherwise, the damage, which could amount to between €70 billion and €170 billion by 2050, will cost us far more than the investment required to adapt.” 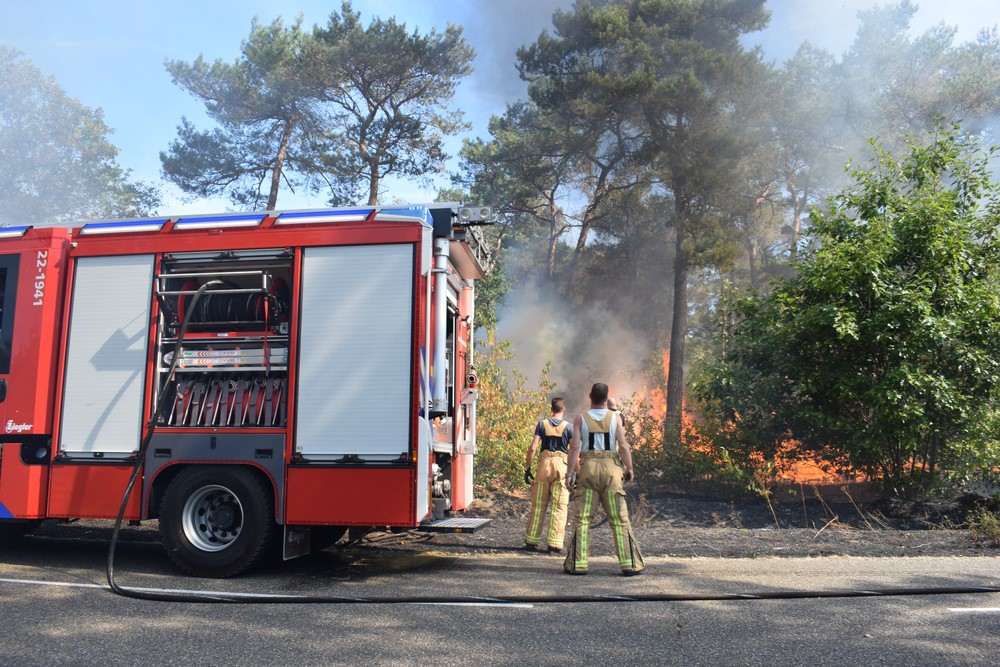 The already hard-hit nature in the Netherlands particularly suffers from drought and longer summer heat waves. “The risk of wildfires will double by 2050.” Photo: (Lars van de Kerkhof / Shutterstock.com).

For example, we would need to change our water system from draining as much water as possible, as has been the case to date, to conserving as much water as possible for dry periods. During prolonged periods of drought, such as in the past three years, agriculture uses a lot of groundwater. This creates some challenges, however, including the subsidence of peat meadow areas. The damage to the peatland leads to subsidence and a lot of CO2 is released, which in turn increases global warming. “To prevent this, we need to move towards better water management. To date, we have mainly dealt with this by pumping water out of these areas, but we should actually work on improving the groundwater level.”

The Climate Impact Atlas is made for a wide audience, especially citizens. “Everyone can understand it.” Water boards, municipalities, provinces and the government are also using it. For example, municipalities used the atlas to get an initial indication for the climate stress test they had to carry out in 2019 to identify bottlenecks and climate change risks in their municipality. “The atlas is an important source of information for parties involved in climate adaptation and policy-making.”

Calculations and models form the basis of the information provided in the Climate Impact Atlas. The maps do contain uncertainties, Van Hattum emphasises. “They are not accurate to the millimetre, but the point is that everyone has access to the best information we have.” 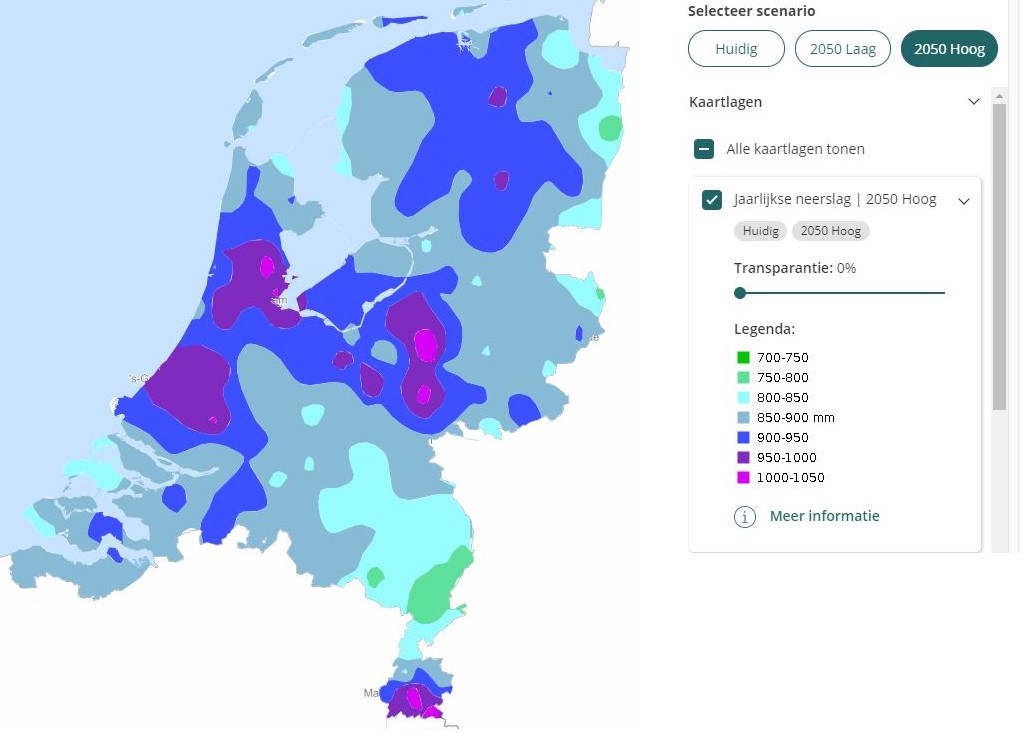 An example of a map from the Climate Impact Atlas showing annual rainfall in 2050 with a strongly changing climate.

The Wageningen researchers recently launched a new initiative together with colleagues from the Royal Netherlands Meteorological Institute (KNMI) and other parties such as the Dutch Association of Insurers. In the Klimaat Impact Monitor (climate impact monitor), they keep track of the present-day impact of climate change. “This includes the consequences of droughts, such as forest dieback, crop failure, and flooded streets and houses. By compiling this kind of data, we can see, among other things, whether the impact is getting worse and whether certain measures are helping. Moreover, in time, we will be able to see to what extent the actual impact corresponds to the climate scenarios from the Climate Impact Atlas.”

And when it comes to the distant future, the Netherlands 2120 project makes a good start. In it, Wageningen researchers show what the Netherlands might look like in a hundred years’ time if we “do everything we should do”. Van Hattum says, “The Netherlands 2120 shows that there are wonderful and sustainable solutions when it comes to energy, urban planning, agriculture, and flood protection, in which a large role is reserved for nature and greenery. Many parties are very enthusiastic about this.”

After obtaining his Master's degree in Environmental Protection from Wageningen in 1998, with a specialisation in water management, Tim van Hattum joined consultancy firm Witteveen + Bos. Afterwards, he worked as a policy staff member for the province of Utrecht and a water board, among other things. He returned to Wageningen in 2010, as a researcher in water and climate, and has been the Climate programme leader since 2017. “I am quite worried about the future. I have children and want the world to continue to be liveable. The biggest challenges of the century are climate change and biodiversity loss. At the same time, there are many solutions that can make our country more attractive and liveable, as we show with the ‘Netherlands 2120’ project. I am very motivated to show why it is so important to work on this.”