Monday morning 0600. Dawn breaks over the metropolis that is Manaus. The city is fully awake and the sound of accelerating scooters, heavy engines and car horns already fill the air. If it weren’t for the heat, humidity and dots of convection that already punctuate the sky, this could be any city. But it isn’t.

As we’ve come to learn over the three days we’ve spent here, Manaus is even today still an island in the rainforest. Its 2.2 million inhabitants live without a direct road connection to the rest of Brazil; almost everything humans put here came in through the main artery of the Amazon River. Take the Teatro Amazonas, Manaus’ famous opera house, which was built at the end of the 19th century upon the riches amassed by the rubber trade. All the marble, ceramic, wood and steel used to construct this fabulous building were specially shipped from Europe. Such operations really put our logistical efforts for CloudRoots in perspective.

And those logistics seem manageable today. All our stuff is packed in a pickup truck, and together with our colleagues from the Instituto Nacional de Pesquisas da Amazônia and the Max Planck Institute for Biogeochemistry, Sam, Hella and Sipko, we finally set course for the epicentre of our campaign – the Amazon Tall Tower Observatory (ATTO). 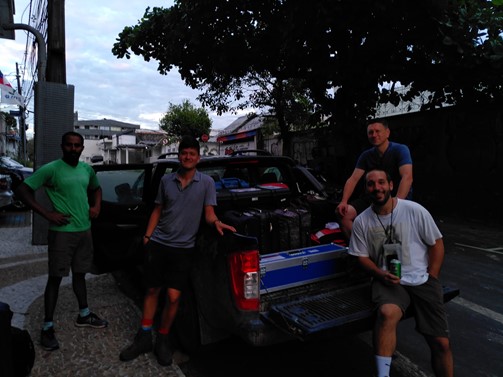 CloudRoots team packed up for the trip to ATTO.

And to get there, we’re truly given the opportunity to get a taste of the scale of the Amazon. We spend our first 2 hours on good roads that cut through dense vegetation. This all leads to a massive hydroelectric powerplant, where asphalt is replaced by dirt and we spend another hour watching our equipment go airborne in the cargo bed as we bounce and slip over roads that increasingly submit to the effects of a daily rain-facilitated laundry cycle. This leads us to the trip’s highlight: an almost two-hour boat journey over the Uatumã River, a tributary to main Amazon with near-pristine banks of dense forest and a total lack of other humans in boats. The contrast to rush hour in Manaus just a few hours before is almost unimaginable.

Narrow section of the Uatumã – a shortcut.

We arrive at ATTO just after 1300, and are immediately bombarded by impressions. We can report that the tower is aptly named – it is tall – but what’s even more striking is its lack of dominance over the world experienced below, you can hardly see it through the canopy until you suddenly stand at the foot of a building taller than the Eiffel Tower. We hardly have a moment to admire this view before we’re interrupted by an incredible racket; it is an afternoon shower alerting us to its arrival through a gust front that pelts the ground with branches. As we run for shelter from the coming rain, a full 30m tree snaps under the massive gusts and comes crashing down right in front of us. Our local technician “God” at ATTO, Valmir, hardly shrugs. Business as usual.

After the rain subsides, we finally have some time to look at our shipped equipment. It looks to be in about as good of a state from the trip as we could have hoped – it’s a great start. We’ve laid our plans, strung up our hammocks, and anxiously await tomorrow, when we begin the buildup for CloudRoots. Até ATTO! 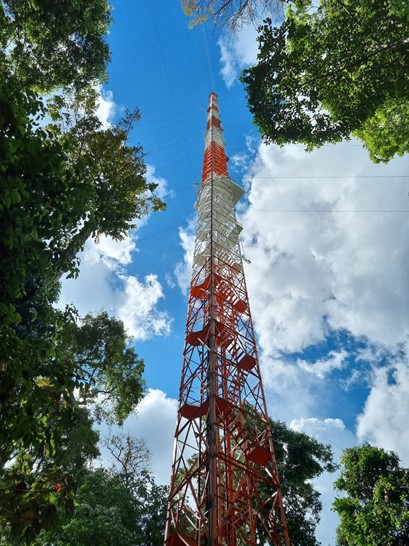 A giant in the forest. We finally arrive at ATTO. CloudRoots is on!