The first speech in the collection is an inaugural speech given by Prof. Mr. J.C. Kielstra on October 7th, 1918. It was entitled “Recht en werkelijkheid” (“Law and reality”).

So far, a total of 926 speeches have been published. The number of speeches has grown substantially over the century. 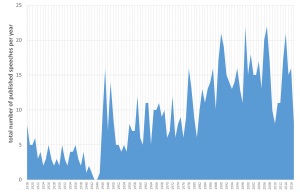 The first speeches were mostly related to social, plant and crop, and environmental sciences. After about 25 years, speeches in agrotechnology and food sciences appeared. They have become a substantial part of the Wageningen academic speech output. 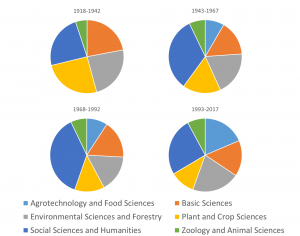 Our Rector, Prof. Arthur Mol, gave his inaugural speech on May 31th 2001, as a new professor of Environmental Policy: “Koppelen en ontkoppelen: milieupolitieke modernisering in een tijdperk van globalisering” (“Connect and disconnect: Environmental political modernisation in the era of globalisation”).

Louise Fresco, President of the Executive Board, gave her inaugural speech on May 21th 1992, when she accepted the position as professor in Tropical Crop Science. The title of her speech was “Zo niet nu, wanneer dan?” (“If not now, when?”). Louise Fresco also gave a speech celebrating the 78th anniversary of the university in 1996: “De bananenrepubliek” (“The banana republic”).

Nowadays, new professors also pitch their research in a short video. You can find these on the YouTube channel of Wageningen University & Research.

The topics of the speeches are summarized by this word cloud. This clearly shows the main research topics of Wageningen University.

WUR Library digitized all published speeches; these are stored in the WUR e-depot.

The most downloaded speeches are:

The average speech has 26 pages, but the number of pages varies between 8 and 79. The longest speech was given by Prof. M. Korthals in 1994 and was entitled “Duurzaamheid en democratie” (“Sustainability and democracy”). The shortest one was the farewell speech of Prof. H.M. Quanjer (1949) with the title “Plantenziektenkundig onderzoek in Amsterdam en Wageningen 1904-1949”.