Over the last few years, Open Access (OA) publishing of scientific output has received a lot of national and political attention. As a result, several initiatives have been taken to stimulate free access to publications that result from research at Dutch universities and institutes. Currently, national OA deals exist for over 8000 scholarly journals.  At Wageningen University & Research (WUR), OA publishing is also encouraged. This blog post shows how the share of OA articles written by WUR authors has grown the last two years and the potential it has to grow even more.

In addition to the national deals, WUR Library has made arrangements with publishers of full OA journals. These deals provide discounts on the article processing charges that WUR authors need to pay to publish their article in these Gold OA journals. An overview of journals for which both the national OA deals or the WUR arrangements apply is made available via the WUR Journal Browser. (Note: to see a list of journals that full under the national or WUR-made deals, you need to be on the WUR network or logged in through My Library.) When public access to an article is possible, a copy of it is deposited in the WUR institutional repository (Staff publications).

The figure below (made with VOSviewer) shows a network of 531 journals in which WUR authors published articles in 2015. Each bubble in the network represents a journal, and the size of the bubble illustrates the number of WUR articles published in that journal. The closeness of the journals is based on their similarity, which, in turn, is based on how often these journals were cited together in WUR-articles that have been published in the period 2006-2016. The colours of the bubbles indicate the share of OA WUR articles per journal: the more red, the more OA WUR articles the journal covers. 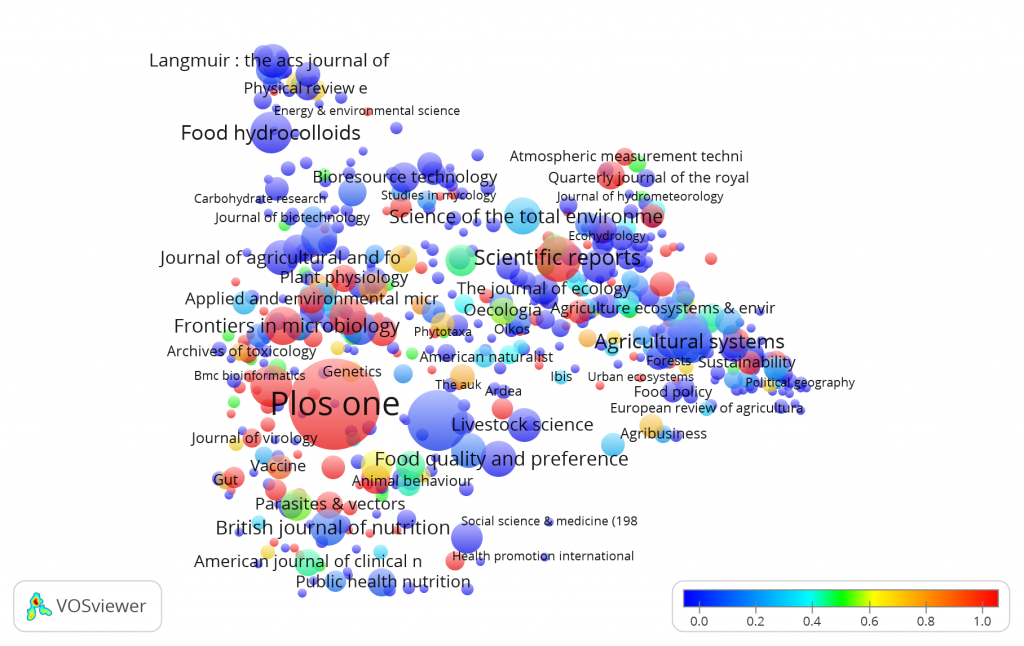 The data on which the figure is based show that WUR authors published many articles in the Gold OA journals Plos One, Scientific Reports, Frontiers in Plant Science, and Frontiers in microbiology. Besides these journals, WUR authors also published their articles OA in subscription-based (Hybrid OA) journals, such as Vaccine, Journal of Chemical Ecology, and Plant Cell.

The figure below shows the same network (of 531 journals) as the figure above, but now with the size of the bubbles indicating the number of WUR articles published in 2016 per journal. 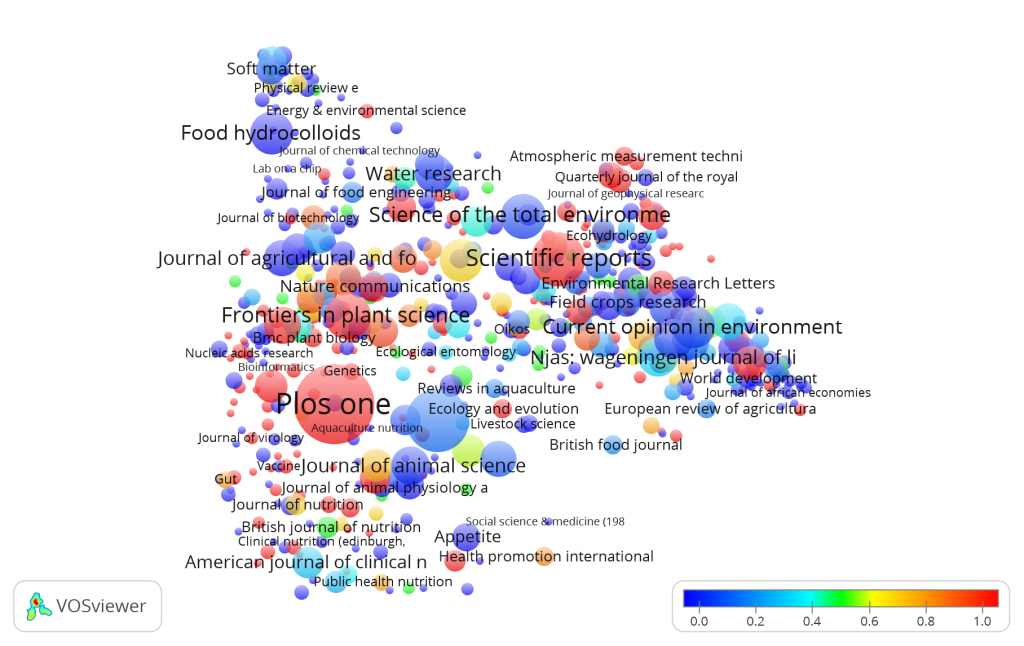 Comparison of the data for 2015 and 2016 shows that for some journals, the share of OA WUR articles has grown considerably, e.g. Applied Microbiology and Biotechnology and Critical Reviews in Food Science and Nutrition. The majority of these journals are part of the OA deals in which WUR participated as of 2016.

The figure below shows the potential amount of OA articles, looking at the WUR publications of 2016. For the journals that are currently part of an OA deal, the OA share is set to 100%, thereby making the unlikely assumption that all of these articles have a corresponding author affiliated with the WUR. 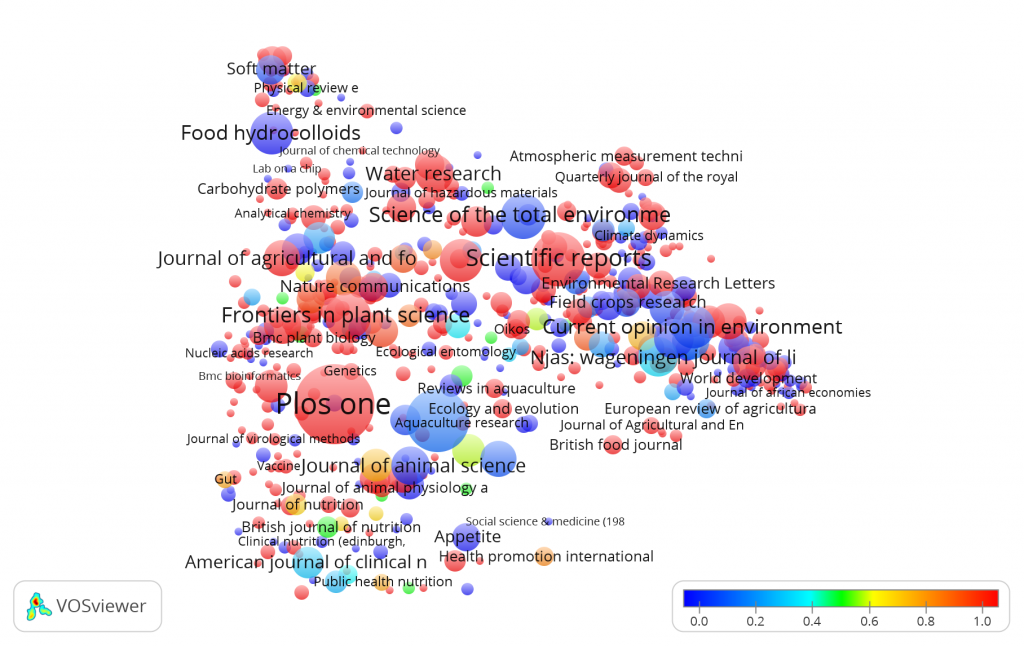 When OA publishing under a national deal or WUR-made arrangement is not possible, or when an author forgot to choose for the OA option in the publishing process, it may be possible, depending on the permission by the publisher of the journal in which the article is published, to deposit an author version (‘post-print’) of the accepted manuscript in Staff publications. This is also known as the Green OA road. The figure below shows the potential public access to articles, either as an OA published version or as an author version (again, considering the journals in which WUR articles were published in 2015 and 2016). This figure shows that, for almost all of these journals, it is possible to make an article publically available via either of these roads. 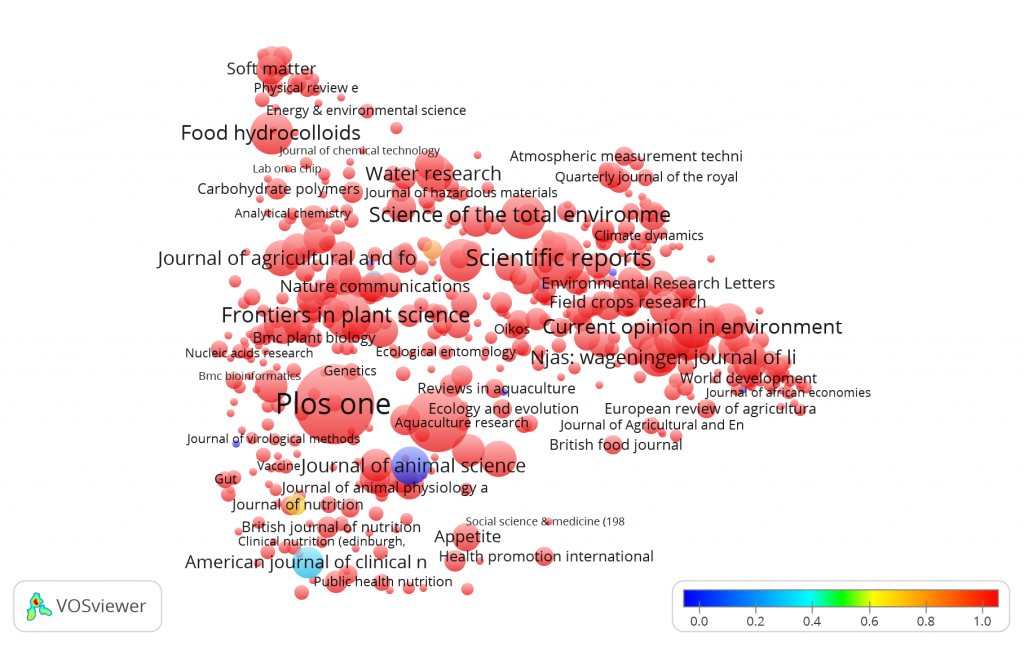 This blog post looked at the WUR articles published in 2015 and 2016 and shows that less than half of the WUR articles are already published OA. At the same times, the figures above also show that much more WUR articles can be made publically available, either by using an OA deal, or by sharing an author version via Staff publications. For more information on this, visit the OA pages of the website of WUR Library or contact the Servicedesk Library.