This is part 10 of a blog series on food systems. This article was written by Han Soethoudt and Heike Axmann.

Seaweed is a great renewable food resource and growing it is relatively simple. Especially in Indonesia,the future for the seaweed sector looks bright. But there are many challenges that need to be solved. Most of these are related to inconsistent quality and the costly fragmentation of the chain.

Globally, around 220 species of seaweed are of commercial value. However, the lion volume comes from the ten species which are cultivated. Those species are either produced in the open sea on ropes by small seaweed farmers (off-shore) and to a lesser extent also in saltwater ponds (on-shore). The leading production countries for cultivated seaweed are China, Indonesia, Republic of Korea and the Philippines. Indonesia ranks second in the world for seaweed production but is the largest producer of seaweed species supplying agar and carrageenan extracts.

We probably consume seaweed during most meals

Seaweed contributes greatly to the nutritional status of communities due to its rich composition of macronutrients. Fresh seaweed is not very often used as an end product, whereas processed seaweed is used manifold. In most cases it is processed to some extract like agar and carrageenan and therefore becomes invisible in our food. But being invisible does not mean at all being insignificant! We probably consume seaweed during most meals. Agar agar is for instance used in confectionary, bakery, desserts, ice cream, ready meals, and side dishes. Carrageenan is predominantly used in desserts, ice cream, and dairy products. The global seaweed industry is worth more than six billion euro, and the industry is expected to continue to expand in the years to come. 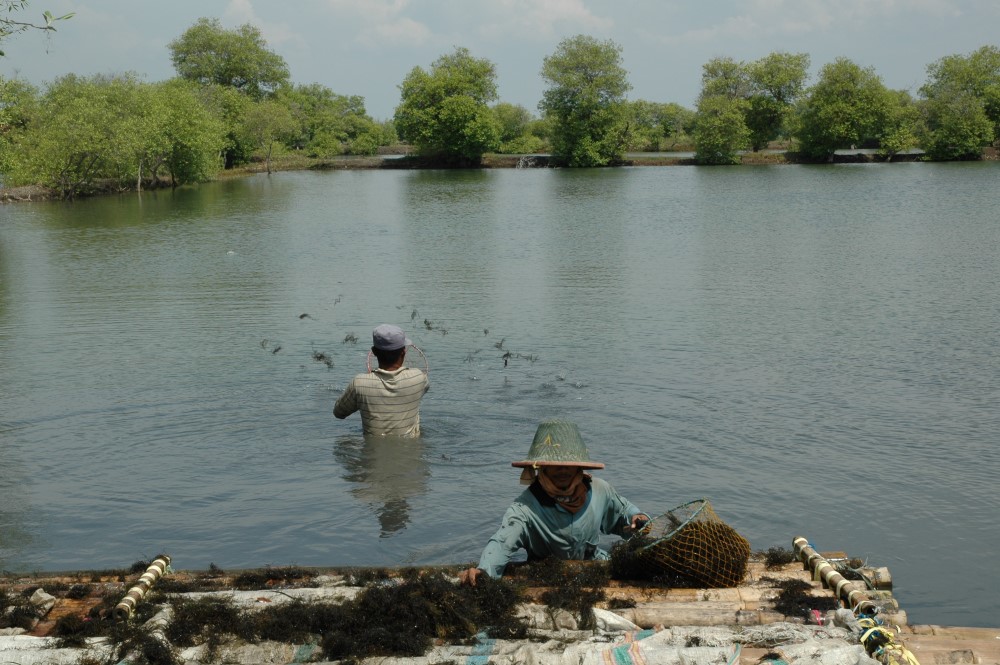 Seaweed is a great natural renewable resource. Growing it is relatively simple, with low initial capital investment. For the off-shore production it only needs nylon lines seeded with spores and for the on-shore production bamboo racks. It requires no land, no fertilizer, and no fresh water to grow, and the crop can be harvest already after as little time as 6 weeks! Therefore, its cultivation offers many new attractive opportunities for the poorest and specifically to the rural population in the coastal areas in developing countries. Increasing the commercial production of seaweed would result in a direct contribution to food security as food or food component, or indirectly by creating employment opportunities and extra income as result of seaweed production.

Plenty of opportunities for Indonesia

Indonesia’s geographic nature with more than 17,500 islands, with an impressive total coastline of as much as approximately 104,000 km in length offers plenty opportunities for seaweed production. The Indonesian Ministry of Marine Affairs and Fisheries has estimated that there are as many as approximately 12.2 million hectares of coastal areas suitable for seaweed farming in Indonesia. But at this stage only about 1.1 million hectares are used for this purpose. Indonesia also has a seaweed processing industry with at least 15 factories producing semi-finished products.

Over one million coastal Indonesians engage in seaweed aquaculture and seaweed farming is specifically an important livelihood for many women, rural, and indigenous Indonesians. Most of the seaweed production comes from offshore former fishermen who could not live from the fish catch anymore. Seaweed offers them new opportunities. 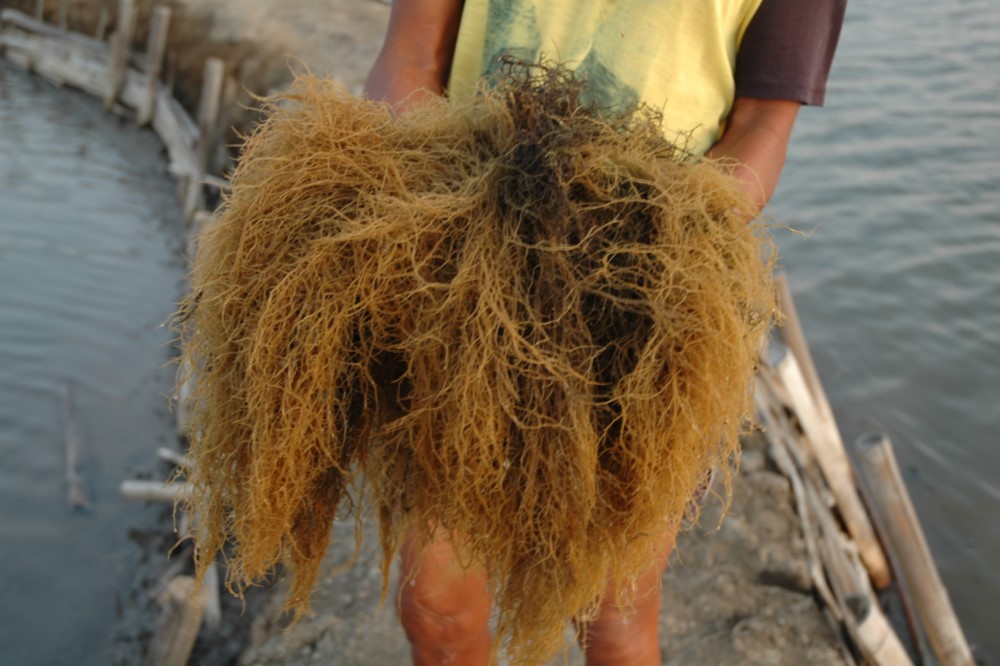 Indonesia is blessed with a high production and huge future potential. The country has an established processing industry and the market demand for seaweed looks very prosperous. Yet, the EU import from Indonesia was less than 0.05% of the EU seaweed import in 2017.

The geographical situation of the Indonesian seaweed production offer both an enormous production potential and a challenge at the same time. The logistic chains from the production on often remote islands to the factories on the main island in Java is long and fragmented, therefore inefficient, costly, and often not transparent. Also, the relationship with the suppliers is weak. This is due to lack of continuity in purchasing and many smaller and bigger middlemen orchestrating the supply chain and bulking the volume from the smallholders to the processors. To fill just one bigger truck, it needs thousands of farmers, several small and medium collectors and approximately one month!

Beginning with seaweed cultivation may not need a lot of capital, but for an optimal quality it needs good seeds and following of good practices as good drying, little salt and absent of detrimental material like shells and stones. A large portion of seedling production in Indonesia is based on multiplication of existing materials resulting into low productivity and low-quality seaweed. Also seaweed is often sold when crops are not yet matured due to cash shortages of farmers. Next to this, the drying and cleaning is done sub-optimal which is leading to a too higher moisture content and greater number of contaminations with unwanted matter.

Although Indonesia has processing industry, no processor is operating at full capacity. The used capacity is not more than about 60%, and in 2020 several companies went bankrupt, and many are close to it. Unsurprisingly, they frequently lack consistency in quality, quantity, and food safety. Quality is under pressure due to the organization of the supply chain via collectors, their length and fragmentation. Transportation costs within Indonesia are even higher than the costs for transportation to a destination abroad!

Most Indonesian processors have limited market exposure, lack a network of buyers and close relations with buyers. They hardly invest in quality and closer relation with farmers, as suppliers assume that trained farmers would just sell to other suppliers or collectors. Another serious threat is posed by Chinese buyers and processors since they have tax refund options while exporting processed seaweed. This enables them to attract Indonesian farmers with spot prices that are higher than the domestic companies can pay. 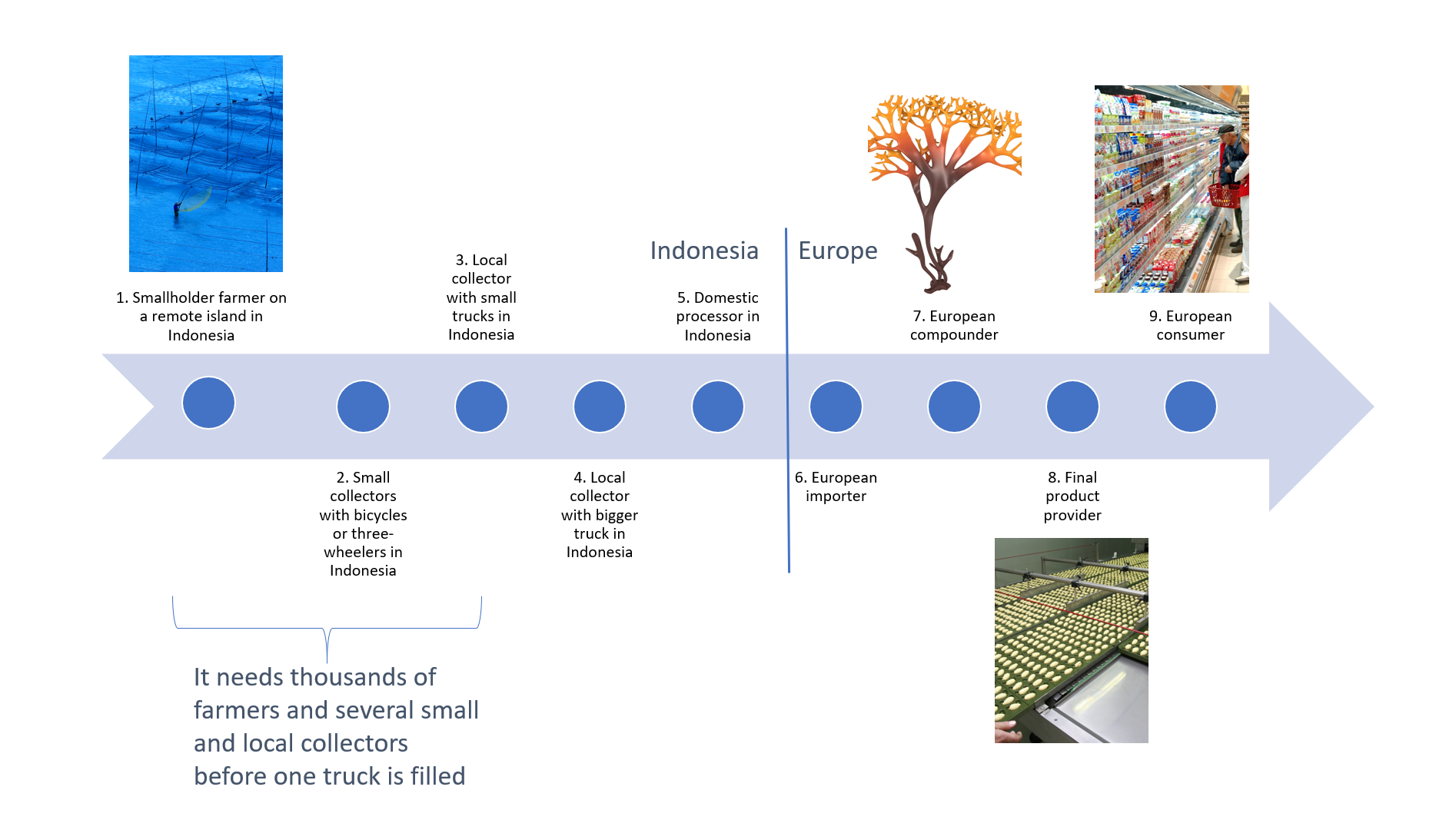 Production of compounds is lagging behind

Finally, the development of seaweed compounds has yet to get off the ground in Indonesia. The market for seaweed products like compounds is a growth market, and Europe is an important and increasing market. However, producing compounds requires sophisticated facilities, a need to understand regional taste, highly effective communication, and close contacts with buyers to develop customized products as well as logistics for reliable supply.

It is important to notice that the strenghts and opportunities of Indonesia’s seaweed sector do not compensate for the weaknesses and threats. The latter can easily overshadow Indonesia’s seaweed position. The poorest, farmers in the remote areas, will be hit the hardest. They are likely to lose market opportunities for their seaweed. But the same holds for the factories and the many employees in the seaweed sector too.

Seaweed drying, processing and export facilities in Indonesia are mainly supplied by smallholder farmers. Production can be typified as a push system in which optimization for volume is absent and market information (like market requirements and market price data) is limited. An opportunity for improvement and scaling needs to be found in quality-driven and market-driven (or pull) supply chains. These chains typically face less food losses and waste because only the right product of the right quality is produced. The profitability is higher thanks to better prices for better quality, which leads to improved livelihood for farmers due to higher margins, less non-sales, and non-payment risks thanks to a better market engagement. Additionally, and in contrast to push supply chains, market-driven supply chains typically go hand in hand with investment capacity thanks to higher margins and fruitful return on investments based on expected and quantified market returns. Obviously, investment capacity is a major driver for upscaling any supply chain and professionalizing an entire sector.

To contribute to the improvement of food security of the poor, it is important to realize that food security not only relates to increased production, but also to access, affordability and stability. This means that the whole value chain, ideally from seed to fork, needs to improve. But an extensive list of interventions for an improved seaweed supply chain to overcome all bottlenecks is also not feasible. A more successful approach is to focus on a cluster of interventions which could potentially have the highest impact to overcome some key bottlenecks. On the supply side, concentration and improvement of primary production, and shortening the supply chain is a major issue. On the market side it could be more interesting for Indonesia to orientate its market approach towards value-added products in upcoming and innovative high-value markets.

Examples are  the organic market, the market for ingredients for bakery products and the growing market for vegan products. Although those market segments are still in an early stage of development, they have a prosperous growth potential as products match well with plant-based and health-conscious dietary patterns of growing consumer groups. Also, it is assumed that those market segments are potentially interested in the added value from seaweed products out of Indonesia like for instance storytelling. Surely, also a focus on these market segments would need to go hand in hand with the optimization of the primary production and the redesign of the agro-logistics network of the supply. Ideally this is done via vertical integration and more concentrated production.

There is still little known about these new potentially interesting market segments for Indonesia. It is also not yet clear whether Indonesia is in the position to overcome the above described bottlenecks. Therefore, Wageningen University & Research is currently assessing those new food markets and is working on a scenario analysis under realistic circumstances for the redesign of the supply in Indonesia. We do that in collaboration with Java Biocolloid, a protype first mover seaweed processor in Indonesia, and in collaboration with the Center for the Promotion of Imports (CBI). The data will be used as input for a feasible roadmap for an improved seaweed supply chain facilitating a sector transition with a bright future for small scale seaweed farmers in Indonesia and beyond. The roadmap should facilitate to work unitedly on a transition, with sector organizations, donors/investors, industry partners, policy makers, NGO’s and last but not least academics.

The topics in this blog are complemented by other research focusses on seaweed cultivation systems and the socio-economic- and ecological aspects of the production. Together we work on a promising future for the seaweed sector for low-income countries, a sector dominated by small-scale farmers in remote areas.

Call for collaboration
Are you a ‘game changer’, a company, government, investor or NGO, who is in one way or another involved in the seaweed sector and wants to break the cycle of rural poverty and lack of transparency?
Do you want to:
> Participate in pre-competitive collaboration, jointly tackling quality and sustainability issues that cannot be dealt with as a single company?
> Support the transition of the seaweed sector, making the sector vibrant, inclusive, and circular?
> Be part of the solution of complex quality and sustainability issues
Then we are looking for you. You can contact us by sending an email to heike.axmann@wur.nl