How can we better utilize the seas and oceans for human food production?

The seas and oceans are considered as a great underutilized source of human food and some recent reports* suggest that marine food production can be increased substantially. In one of our previous blogs we stated that the marine food chain is already very efficient and that ecological limits should be considered. So what are the best ways to increase food production while taking into account the ecological limits? A group of researchers from EFARO**, the European Fisheries and Aquaculture Research Organisations, are presently considering the various options. A final report is expected at the end of the year. Here, we offer a first impression.

About forty years ago almost all fish and seafood (including freshwater species) on your plate was captured in the wild (Fig. 1). Global capture production in marine and inland waters was about 78 million tonnes fresh weight in 1985. Dividing it by the world population (4.9 billion in 1985), reveals that about 16 kg of fish and other seafood or aquatic food was caught per person per year. Aquaculture provided only an extra 1.6 kg per person. Hence we had almost 18 kg of fish and seafood per person per year in 1985.

Since then, capture production did not rise very much but aquaculture production strongly increased. Taking these two sources together 178 million tonnes were produced in 2020, and divided by the world population (7.8 billion in 2020) gives 23 kg of fish and other aquatic and marine animals per person per year. So only through aquaculture the amount of produced fish could keep pace with the growing world population and the amount per person has even increased. 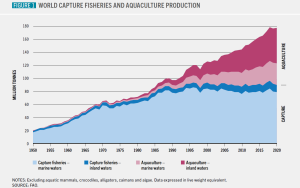 Salmon culture is not the solution

Based on these figures it is tempting to believe that aquaculture is the solution to better utilize the seas and oceans for the production of human food in the form of animal proteins. If, however, we take a further look at what actually happened, we must conclude that this is not the case. The increase in aquaculture (we do not yet talk about seaweeds here) is to a great extent due to the production of carp and other freshwater species in Chinese fish ponds and reservoirs. The European and American contribution is in the form of salmon culturing in coastal marine waters. Looking only at marine production, aquaculture could not prevent that the total seafood production per person has decreased over the last three decades (Fig. 2).

Besides, all marine aquaculture species are fed with a mixture of wild caught small fish, such as herring, sprat and anchovy, and agricultural products like grains and beans. The salmon that you now buy in the supermarket has mainly grown on a diet of 75% soya beans or other agricultural products. Hence one may question; is intensive aquaculture still marine food? The ecological production of the seas, with the tiny phytoplankton at the basis, has only to a small part contributed to the rise of aquaculture. And not in the most efficient way. The fish species that the cultured salmon are fed with are edible for humans too, and in the conversion from feed to salmon meat most of the energy and nutrients are lost. Hence, increasing salmon production in its present form is not the way to go when looking for more marine-based food for humans. 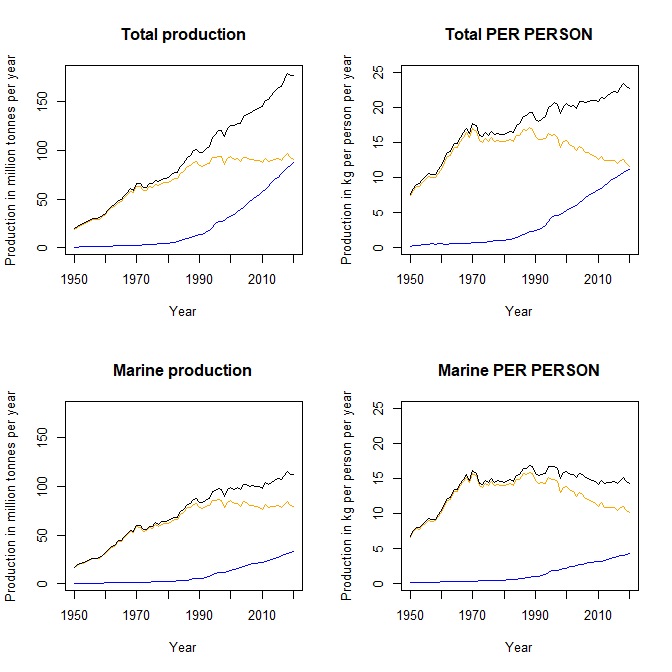 When talking about aquaculture, it is thus important to distinguish between extensive marine aquaculture with no or minimal resource inputs and intensive aquaculture that entirely relies on supplementary feed. Aquaculture of low-trophic organisms such as seaweed or shellfish, belongs to the first category. Seaweeds are primary producers and they take up the nutrients they require such as nitrogen and phosphorus directly from the natural ecosystem. Similarly, shellfish feeds merely on natural phytoplankton. These organisms occur low in the food chain (and are thus called low-trophic organisms), in contrast to the fish species that are commonly caught in marine waters, which are all carnivores or top-carnivores.

Intensive aquaculture of marine finfish requires supplementary feed. Only when fish feed is developed that uses fish processing waste or products or by-products from extensive and low-trophic marine aquaculture, can cultured finfish or cultured shrimps truly be accounted as marine food, because then they no longer depend upon terrestrial-based food. The possible use of seaweed as a source for fish feed in, for example, in the salmon industry is presently examined, but serious concerns exist about its nutritional value.

The EFARO group explores what the future prospects are of extensive aquaculture, where the developments have so far has lagged behind in western Europe. The mussel culture, for example, has even decreased from on average 189,000 tonnes per year in the period 1981-2000 to 162,000 tonnes in the period 2001-2020, and the seaweed industry is still in its infancy. Many questions are still open, not only on the production side (what is actually the carrying capacity of the sea for large-scale seaweed production) but also about issues like food safety, economy and demand.

Apart from (1) extensive aquaculture, other options are examined as well: (2) better management and use of presently exploited fish stocks, (3) restoration of impoverished coastal ecosystems or artificially increasing productivity by ecological engineering, and (4) harvesting so far unexploited stocks, such as various fish species from the twilight zone of the ocean or the larger zooplankton species from polar regions.

Appropriate management for all exploited stocks might increase worldwide yields compared to the present situation. Such management would include a reduction in fishing mortality for many stocks and a decrease in the levels of discards by fishing more selectively and avoiding unwanted bycatches. A World Bank report estimates that by proper management of fishing effort, annual harvests could increase by 13%. Others predict an increase of 18% if all stocks are better managed. So there is something to be gained here, but not very much. It could also be interesting to look at the use of the catch. At present about one-fifth of worldwide catches are used for fishmeal and fish oil production and merely used as animal feed in aquaculture and animal husbandry. Here, there is an opportunity for a more efficient use of fishery yields. 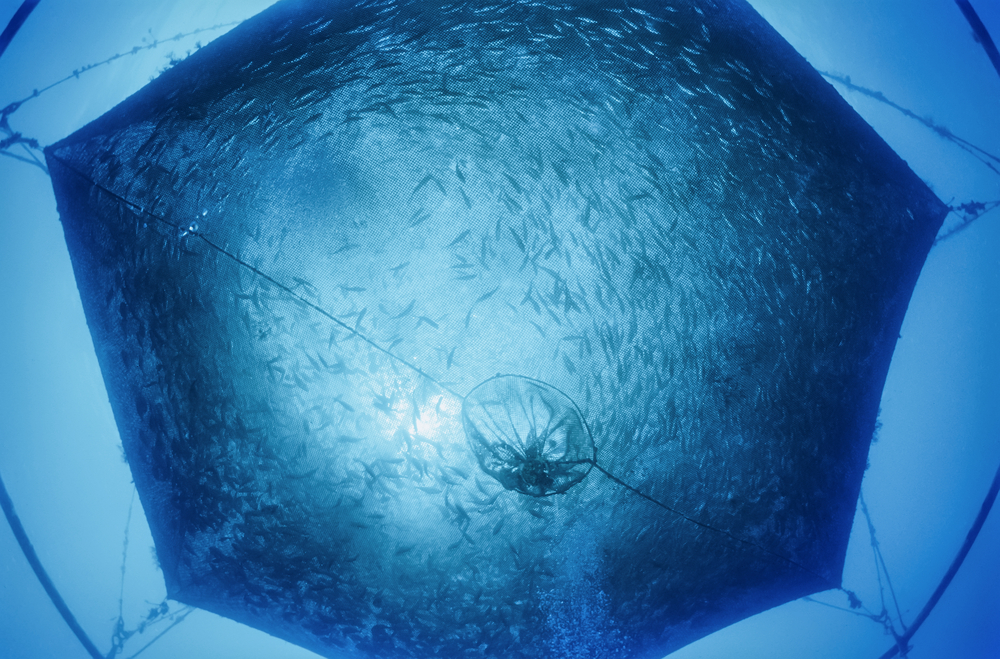 The third opportunity to increase the food production of seas and oceans, is the use of various types of ecological engineering to improve the carrying capacity of marine ecosystems. This opportunity is based on the notion that coastal urbanization and other human activities have led to a loss of productive marine habitats. Nature-inspired, engineered solutions can range from e.g. the restoration of sensitive, productive habitats such as subtidal boulder, shellfish and coral reefs, seagrass and seaweed meadows to the deployment of purposely designed artificial reefs to create new habitats and artificial sea mountains aimed at providing the upwelling of nutrient-rich deep water to surface waters where primary production is nutrient-limited. The so-called ‘greening of grey hard infrastructures’ incorporates ecological solutions in the design of marine infrastructures (e.g., docks, break waters, pipelines, wind farms) to accommodate better attachment of organisms and offer shelter from predation to juvenile fish.

The last option is harvesting species that are as yet not being exploited, the main candidates being mesopelagic fish species and the larger zooplankton species. Mesopelagic fish species, such as the lanternfishes (or myctophids), live in the open ocean, where they occur in the twilight zone below 200m depth during the day, but move to shallower depth at night. Previously it was thought that mesopelagic stocks were not very abundant and given the costly logistics it would not pay off to exploit them. In the last decade, much higher estimates of mesopelagic fish biomass have been published, which has aroused new interest in the possibilities of harvesting these oceanic fish populations. Another possibility is increasing the exploitation of larger zooplankton species such as Antarctic krill Euphasia superba and various Calanus species, that occur in polar regions. Recent studies have shown their high standing stocks and the potential for an increase in harvesting is considered relevant.

The EFARO group is still at work, but we can already state that all options to increase food production from the sea are associated with great uncertainties. The potential for large-scale mariculture in offshore areas in relation to the carrying capacity is still largely unknown, for seaweeds as well as for low-trophic animals. Experiments on, for example, potential growth rates of seaweed have been performed at small-scales, but to predict the consequences of upscaling requires the use of mathematical ecosystem models that keep track of nutrient, mass and energy budgets. Whether these models are already capable of making reliable predictions is questionable.

With respect to the exploitation of new resources the group pointed to extensive uncertainties and deficiencies in actual knowledge on a) biomass estimates of potential resources, b) stock identity and population dynamic parameters and vital rates, c) robust stock assessments to assess biological sustainable biomass available on single stock basis to be harvested according to MSY, d) biological food web interactions and importance in ecosystem functioning and services including biodiversity, ecosystem stability and evaluation of resilience of the marine ecosystem to potential exploitation, and e) the role of the stocks in sequestration of greenhouse gasses. It is therefore a big question whether these potential resources will be able to fill in the gaps in future needed global food supply.

Ecological engineering seems a promising avenue for many local situations, but what the potential contribution to global food production is still unknown and needs to be quantified. The overall preliminary conclusion is that we should not depend too much on the seas and oceans as the great underutilized source of human food.

* For example Costello, C. et al. (2019) The Future of Food from the Sea, World Resources Institute or Pharo, P. and Oppenheim, J. (2019) Growing Better: Ten Critical Transitions to Transform Food and Land Use, The Food and Land Use Coalition.