Towards climate resilient food systems in Egypt and Jordan

Some weeks ago, my colleague Marijn Gülpen and I visited Egypt and Jordan, both countries with food systems vulnerable to climate change. Together with the Dutch agricultural counsellor and other staff from the Dutch embassies in these countries, stakeholders from governmental, private sector, research and civil society organizations discussed how to make food production more climate resilient. And how the Netherlands could support this.

In the past years, the Dutch government has been supporting a wide portfolio of interventions where Dutch organizations partner with local agricultural organizations and farmers with the aim to make their farming and food systems more resilient (next to other goals such as market linkages and job creation within value chains). Preferably in such a way that it simultaneously works towards more environmentally sustainable farming whilst improving productivity and income, adapting to changing climatic conditions and ideally also contributing to climate mitigation. Recommendations on how to increase such interventions’ relevance, sustainability, scaling potential and social inclusiveness were developed during these interactions.

Different views and perspectives on which pathways to adopt towards sustainable and climate resilient farming in Egypt and Jordan were shared. One clear difference in the expressed views relates to how food production is placed within wider ecosystem processes. Increasingly nature-inclusive and regenerative agriculture are being promoted to ensure food security for the next generations as they strengthen the resilience of underlying ecosystems which helps to absorb the shocks and stress from climate change.

Such an approach contrasts with the currently more conventional technology-based and de-coupling sort of changes towards sustainability and climate resilience where efficiency and circularity mechanisms are assumed to sufficiently reduce the use of natural resources for food production and the related land degradation. As part of the stakeholder interactions, we met with farmers in the field who represent these different approaches.

For example, we met with Houda, an ambitious grower working for a Dutch-based consultancy operating in Jordan. She is currently ensuring that the Knowledge and Innovation Centre (KIC), not far outside of Amman, is being built according to modern standards needed for advanced horticultural techniques. She informs us with great knowledge and enthusiasm that the KIC consists of a greenhouse equipped with lots of technologies such as climate control, biological pest control, heating, cooling and fertigation. All monitored, automatized and computerized. Talking about the latter her eyes start glowing with pride. 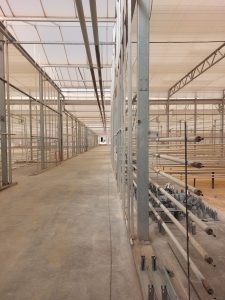 The KIC will be used by Jordanian organizations to trial these techniques in the Jordan context and to learn from it. It is assumed to host groups of learners from universities but also from farms and other organizations allowing them to get both theoretical education as well as hands on practical experience in operating greenhouse like this one. Furthermore, the KIC will act as a dialogue centre where different actors can share best practices.

The KIC is thought to act as a great scaling mechanism to bring horticultural production in Jordan to a next level. It is amazing to see that when different organizations, both private and public, work in partnerships and pool investments, how fast such a centre is developed. Within a year after construction started, the greenhouse will be operational, and Houda will make sure that the first seedlings will be there to be planted. Horticultural production in greenhouses like the one in the KIC will in theory help to make the Jordanian food production more resilient as climatic conditions inside can relatively well be controlled.

Then we also met Fadoul, an ambitious Jordanian farmer who is regenerating about a hectare of degraded land in the middle of a hilly area a few tens of kilometres from where the KIC is being constructed. We meet him on a hot September morning. Still in long hot summer which was experienced in Europe, North-Africa and the Middle East in 2022. Whirlwinds create columns of sands in the sky sucked up from the barren soils which are relatively poor resulting from intensive cropping and grazing in past years in these areas. 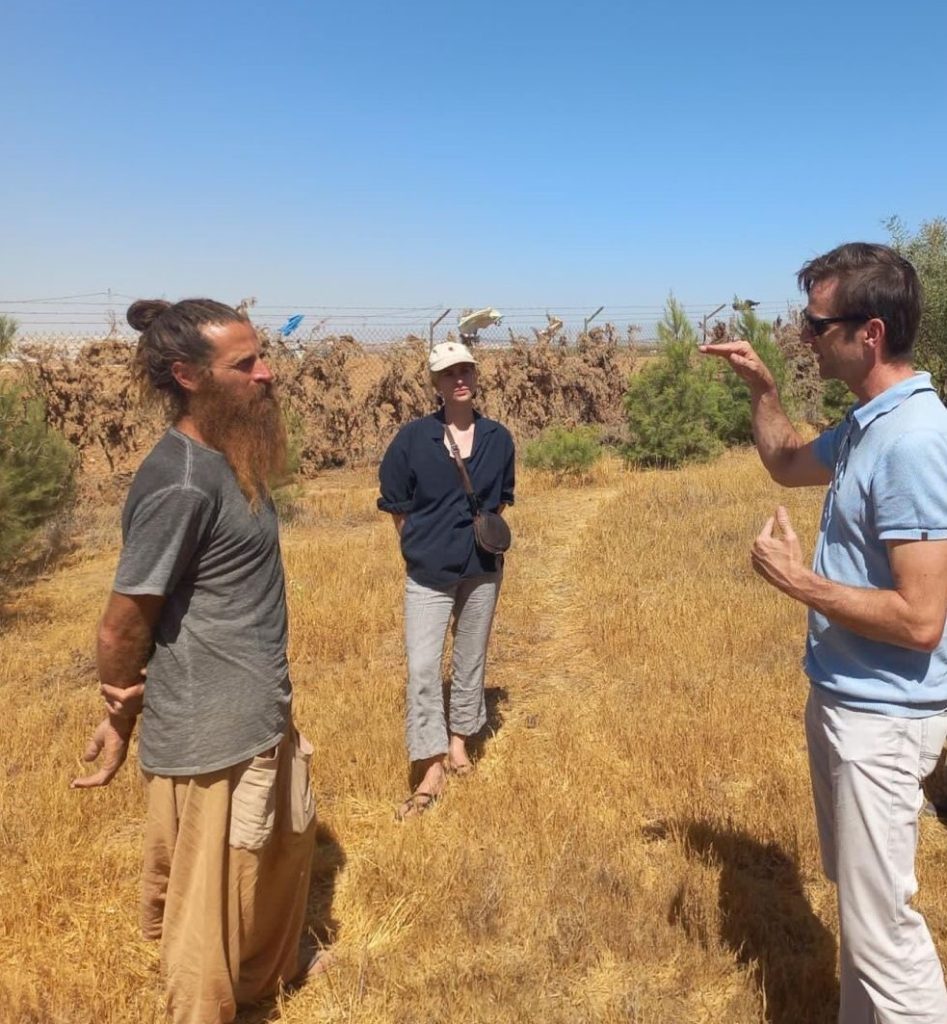 Amidst those fields, Fadoul is busy creating a productive farm through permaculture. With knowledge and enthusiasm, he explains how he has been trialling all kinds of techniques over the past years to collect and store water, compost and reduce erosion and evaporation using mulching, cover crops, wind-breaking fences and others. He combines all kinds of waste materials which he gets cheaply or even for free including old tires, cans and other man-made products which are recycled for composting or as parts in his farmhouse.

When he mentions that, against common belief, he discovered that adding orange peels to compost created a balancing compost for the surroundings his eyes are equally full of pride. His idea is that his land will become productive enough such that it will meet his family’s food needs. Nothing more than that. And that in return as part of a stewardship relation with nature he will take care of the land. The idea is also that the land’s ecosystem would be so resilient that it could cope with most of the climate change and variability’s challenges experienced in the region.

The Wizard and the Prophet

Houda and Fadoul can be seen as personifications of the duelling characters in Charles Manns’s 2018 book, called The Wizard and the Prophet. Houda may be a representative of the Wizard with a strong belief that through innovations and technologies we can manage nature such that it serves people to create food security. Fadoul is more like the Prophet who believes that if we use more than the planet is giving us, our prosperity may eventually ruin us.

The Wizard-like greenhouses like the one currently being built as part of the KIC certainly can have a role towards sustainable and climate resilient food systems in Jordan. But only when such greenhouses use closed systems of water and nutrient recycling, renewable energy and try to use biological pest control instead of fuel-based synthetic products. The greenhouses are seriously knowledge and capital intensive and hence one wonders how wide an adoption among Jordanian growers would be possible. Additionally, strong links with the greenhouse supply industry seem to force growers to produce as commercially as possible with the risks that demands for water and energy exceed current ones. While horticultural production could add to the Jordanian food and nutrition security through fruits and vegetable production, most of it is meant for export. In that sense, greenhouse horticultural development still fits well in the current more growth-focused economy.

The Prophet-like regeneration of lands as practiced by Fadoul is also very knowledge-intensive. Lots of trialling is needed to identify the optimal practices for his local conditions. While maybe less capital-intensive, the regeneration is time-intensive as such a process may take several years. How many growers can accept the unpredictability and possible risks of experimenting for some growing seasons before its land becomes sufficiently productive again? Would they be willing to have this more stewardship role towards nature? With ecosystems being diverse and complex, what eventually works for the land of Fadoul does not necessarily work elsewhere hence scaling of good practices will not be simple. 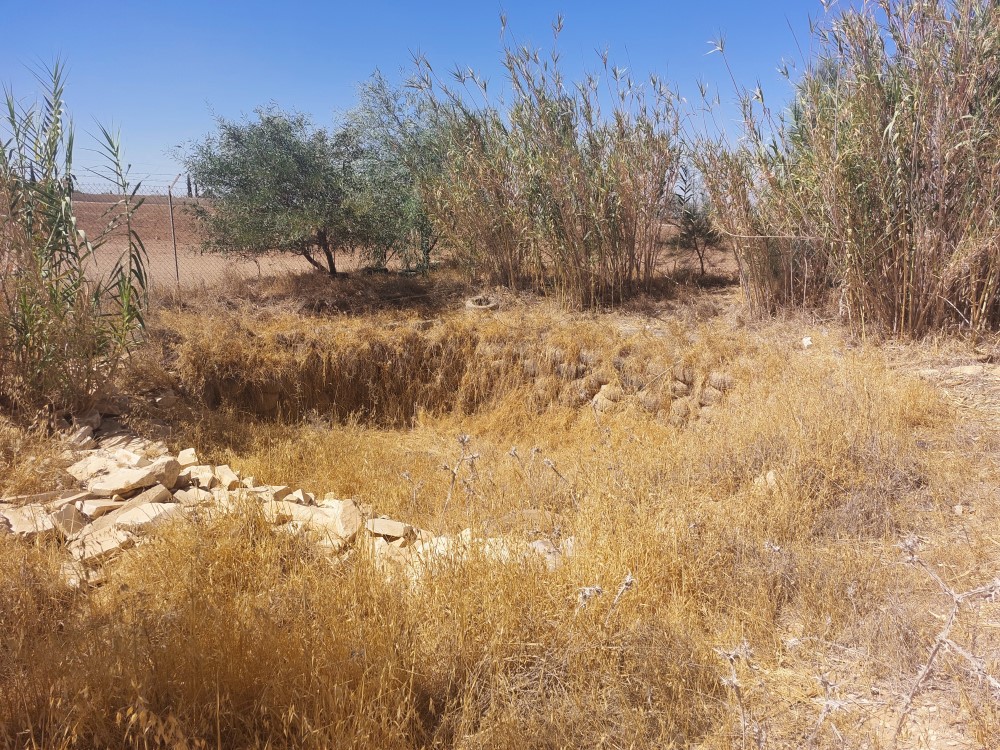 Large-scale regenerative agriculture would require sufficient availability of freshwater resources and of sufficient organic matter and vegetation to enrich the soils again and to allow for habitats of biodiversity. For an arid country like Jordan a challenging context. What if the regenerated lands where little to no external agro-inputs are being used are eventually only limitedly productive? Would Jordan’s food security be met and made sufficiently climate resilient? And how would such production systems fit in the wider food system economy of value chains and trade?

Two different views on pathways towards sustainable and climate resilient food systems. While physically located only tens of kilometres apart they seem like the two end members of a wide spectrum. Both seem to serve some of the purposes of sustainability and climate resilience though not in such a way that they can be considered silver bullets. So many questions remain and often they manifest as dilemmas to be solved.

These different views on such pathways are not exclusive to the Jordan context. This discourse is currently very much taking place within societies across the globe including in the Netherlands. And obviously in between these more opposite views various hybrids and alternative can be found on the sustainability pathway spectrum.

Which pathway works best for Jordan could not be answered during the stakeholder interactions. Likely both Wizards and Prophets may be needed and preferably together in teams with others with alternative views where they learn and create together.