This is the 6th blog post in the series about the 100th anniversary of Wageningen University. In the perspective of One Wageningen we highlight in this blog post the collection of reports from Wageningen Research (WR). Anna Besse, Henrieke van Lieshout, Joke Webbink, Jorik Booij and Marco van Veller contributed to this post.

The WR institutes have a complex historical structure of many mergers. As a result of extensive work by Gerrie Holmer and Joke Webbink we were able to identify 132 locations of the predecessors of Wageningen Research. Nowadays there are far less locations, with the headquarters in Wageningen, Lelystad, The Hague and IJmuiden. Several institutes have branch offices or research stations at other locations as well. Click on the map below to go to the interactive map with all locations. 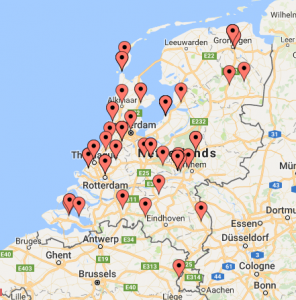 The WR institutes have a tradition of publishing research results as reports, peer-reviewed articles and articles in professional journals as shown in the graph below. From the number of reports, you can see the growth of the WR institutes throughout the past 100 years. The majority of the total of WR reports (71%) are publicly available, via the Staff publications. Nowadays, almost all reports are published open access (90% between 2014 and 2018). The older reports are scanned by WUR Library (back to 1907) and made publicly available. 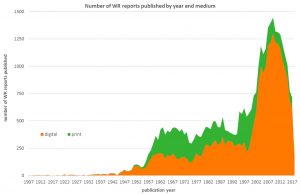 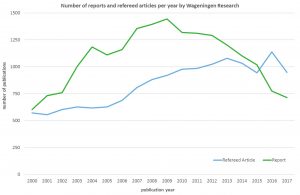 The following figures show presentations of keywords that describe the content of the WR reports of the nine current research institutes. For every report that is included in Staff publications keywords are added. These added keywords come from a controlled vocabulary and are chosen to describe the content of each WUR report. The reports published since the year 2000 are included in the analysis.

The size of the bubbles and keywords correspond with the number of reports to which each keyword has been assigned. The distance between the bubbles shows the relationship between keywords based upon co-occurrence in the registration data of the reports. Keywords that co-occur most together have been clustered; these bubbles have the same color. 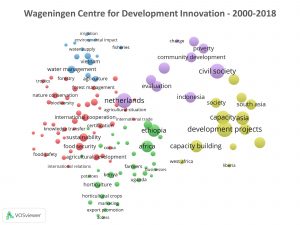 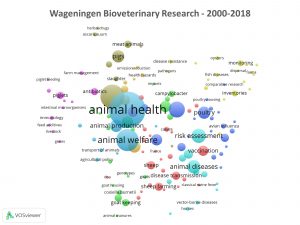 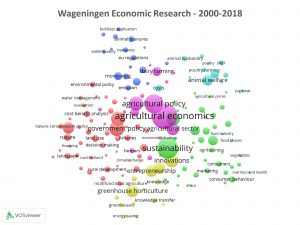 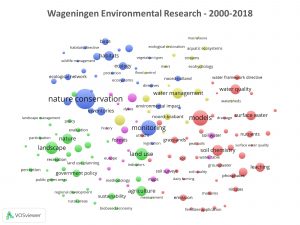 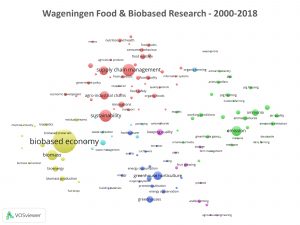 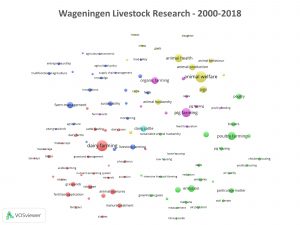 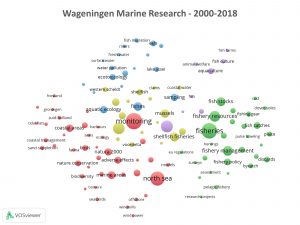 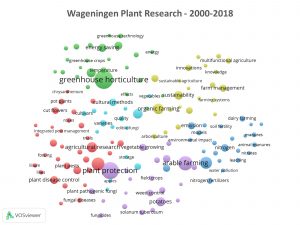 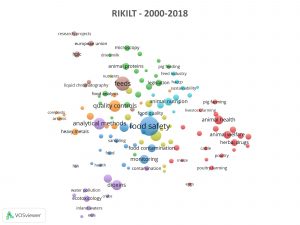 Uptake of the reports

A search on the institute names resulted in 4,881 publications that cite WR reports. Only 954 of these publications are written by WUR researchers. So most of the citations to WR reports come from researchers affiliated with other scientific institutions than WUR. For the analysis, it was necessary to include terms as Wageningen UR and WUR and therefore some other content like WUR dissertations are also included in the cited documents.

Since 2016 WUR Library assigns a doi (digital object identifier) to every report of Wageningen Research. This identifier enables Altmetric to track mentions of these reports in online media like twitter, news sites and blogs. But what might be most interesting of this tracking service is that Altmetric also searches through policy documents. An example is a report of Wageningen Economic Research entitled “Competitiveness of the EU egg sector, base year 2015: international comparison of production costs” by van Horne and Bondt. This report is mentioned in a news outlet. The Altmetric-score can be found here.

An advice for all WUR staff that share their work via social media is to mention the title or even better the doi of their publication. This makes it easier to measure the mentions and link them to the right publication. Do you know you can create a simple link to you publication by using http://doi.org/<mention the doi here>?