Back from the future: transition pathways for food security in low- and middle-income countries

This is part 16 of a blog series on food systems. This article was written by Bram Bos, Boelie Elzen, Vincent Linderhof and Marijke Dijkshoorn.

Food systems worldwide, especially those in low- and middle-income countries, need to be transformed for various reasons. The UN’s second Sustainable Development Goal states that societies have to achieve food security and end hunger. At the same time other SDGs related to climate change, biodiversity, soil quality and the quantity and quality of water resources have to be addressed, not least due to their impact on farming and food production.

In high-income countries like the Netherlands this is a multi-faceted challenge that requires a structural and sometimes radical transformation of current practices. The Transition Pathways method under development by Wageningen University & Research (WUR) is aimed at understanding how strategies for realising sustainable future food systems can best be developed.

There is a tendency to tackle societal issues like pollution, global warming and food provision in isolation. This runs the risk of replacing old problems with new challenges as the various solution paths have an influence on each other. Moving into the future with our backs turned to the way forward means we can easily miss the pitfalls ahead.

To address this, we have developed a ‘forward looking’ transition pathways method. The general idea is that all relevant stakeholders involved develop a common vision of what they wish to achieve by future dates such as 2030, 2040 or 2050. The target year should be chosen so that the necessary transformations can be realistically achieved in that timeframe: for instance, a vision for a sustainable food system in a certain region or country by 2040.

As such a new system can be very different from the current situation, many might consider it unrealistic. The pathway from the present to the future is therefore broken down into a series of smaller steps that are seen as sufficiently plausible and realistic for people to imagine their success. This series of incremental steps is called a ‘transition pathway’, a development track that leads from the present unsustainable system towards one which is sustainable in the future. A key consequence of these smaller steps being realistic is that the vision of this sustainable future also becomes realistic.

The approach has two main objectives:

Our method is to reflect with stakeholders on this transition pathway and explore what they can do to realise the future vision, either individually or by coordinating their activities with other stakeholders. This process can be repeated in order to adapt to future changes and unexpected events.

This general approach is currently being applied in several cases in Africa and Asia, two of which are described below.

WUR is collaborating with the Collective Impact Coalition on Ghanaian Urban Food Environments (GUFE), an initiative by the Netherlands Food Partnership (NFP) and the University of Ghana aimed at achieving healthy and sustainable diets in urban food environments. Two sessions are organised to start a dialogue on how transition pathways might attain this goal in Accra by 2050. Action perspectives linked to these pathways are discussed dialogues facilitated into what is expected from members and stakeholders in areas such as investment, adjusting regulation, enforcement and promotion.

Ethical engagement with the private sector is currently being emphasised as the coalition seeks a sustainable way to proceed. It would be valuable to explore how this can be further realised, which Standard Operating Procedures (SOPs) need to be put in place to facilitate such engagements, and what is expected from other stakeholders like governments, farmers, NGOs, and research and knowledge institutes.

Transforming the dairy sector in Ethiopia

In Ethiopia we have teamed up with the BRIDGE project, which is aimed at improving and ultimately transforming the dairy sector. In a series of workshops an existing and shared long-term vision of the food system at large in Ethiopia will be used to formulate the place and character of dairy production and consumption in this food system and then reason back which intermediate steps (transition pathways) are needed to make such a vision feasible. These exchanges can help us improve our tools, while BRIDGE benefits from a clearer narrative on its longer-term goals that may impact the current project or lay the basis for a follow-up. 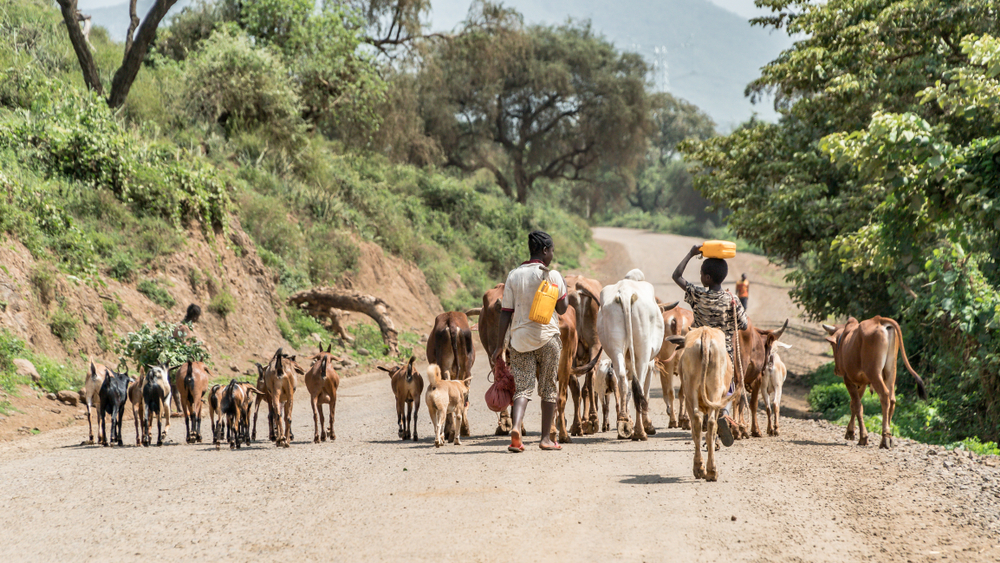 In a series of workshops a vision of the food system in Ethiopia will be used to formulate the place and character of dairy production and consumption in this food system. Foto: canyalcin / Shutterstock.com.

While these measures are being planned, the current state of emergency in the country makes their practical application more difficult. One observation that we can already share is that future visions of food systems may easily be framed as a supply-demand issue, prompting a traditional response of increasing the volume and quality of production and chain logistics. However, if the longer-term goals also include broader socioeconomic and ecological goals (in the face of climate change and biodiversity loss, for instance), those future visions may have a radically different character. Broadening the scope is difficult in the case of projects that are already running and framed around supply-demand.

The transition pathways method is a way to backcast from a desired future scenario that may be radically different from the current situation. By constructing one or more pathways with intermediate steps back from the future, the method makes it feasible for stakeholders to see that such a future is attainable. Transition pathways are currently being tested and refined in three different cases in Asia and Africa. The ultimate promise is that projects which are part of broader transformation efforts in the food system will be better able to plan and steer in such a way that they contribute to the simultaneous improvement of the very different challenges food systems are facing.

Marijke Dijkshoorn-Dekker is a senior researcher at Wageningen Economic Research with extensive experience in programme, project and process management in the field of agriculture, food and greenery in an urban and rural environment. She supports stakeholders in making integral considerations in the field of rural and urban sustainability issues. Within the framework of metropolitan solutions, she currently carries out a series of projects on urban and rural transitions towards more (bottom-up) involvement of stakeholders. In this, make use of a multi-stakeholder approaches, scenario analysis, monitoring and evaluation methodology, multilevel governance, social innovation.