This is part 5 of a blog series on food systems. This article was written by Huib Hengsdijk.

The population of East Africa is expected to have doubled by the year 2050. The growth is even more rapid in rural areas, many of which already face challenges in providing sufficient food and nutrition to their people. These areas often face less favourable agro-ecological conditions such as poor soils and low, erratic rainfall while lacking the infrastructure to access remote markets. How can research contribute to SDG 2 – end all forms of hunger and malnutrition by 2030 – in such rural areas?

The West Nile region of northwestern Uganda is a typical rural hinterland where a fast annual population growth of 3% is adding to the current burden of malnutrition and hunger. The daily calorie intake of a large proportion of the population is less than recommended while poorly diversified diets worsen malnutrition. Overall development has been slow in the West Nile region as is typical for remote areas close to national borders. Subsistence agriculture with very low crop and animal yields remains the mainstay of livelihood for most people.

Moreover, recent decades has seen the West Nile region become a major refuge for hundreds of thousands of people from the Democratic Republic of Congo and, in particular, South Sudan. Much of the transboundary human migration consists of forced movement due to local conflict and political unrest, with some 25% of the total population of the West Nile currently having a formal refugee status. Although Uganda’s progressive refugee policy means migrants have the right to work and cultivate land, most of the refugees still rely on food assistance for their livelihood.

To stimulate the integration of refugees in the local economy, food assistance is being redesigned into cash-for-food programmes where refugees are given money to produce their own food or buy food from local markets rather than receiving monthly rationed food aid. While this sounds good, the current subsistence agriculture in the West Nile region is unable to produce enough food to ensure a healthy diet for the rapidly growing host population and the refugees. 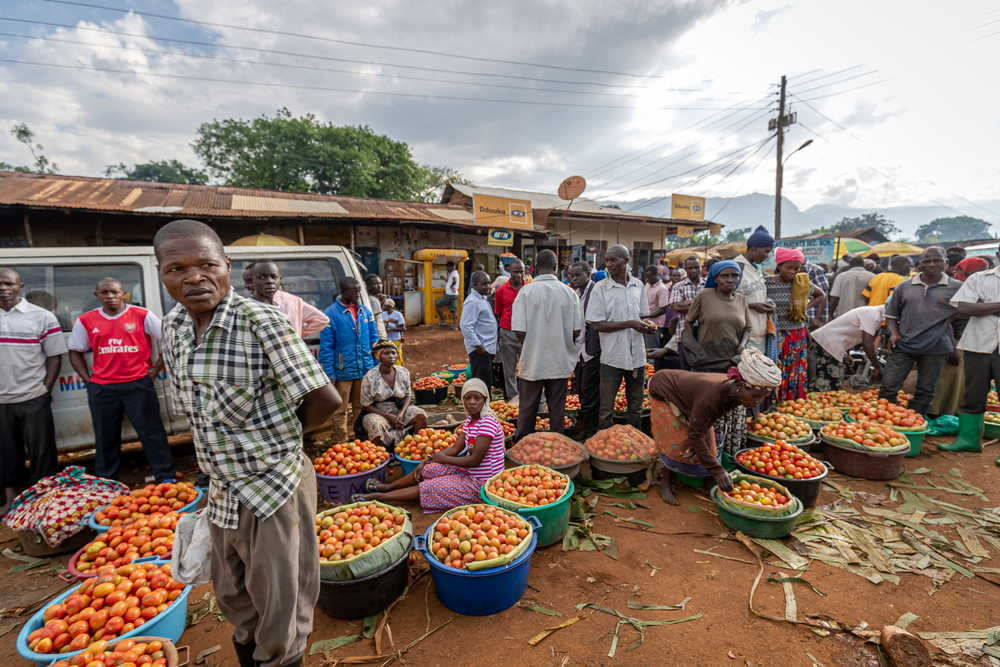 Cash-for-food programmes therefore place a considerable burden on the food system of the West Nile and may result in food price increases, food insecurity for host and refugee communities alike, and social unrest between different population groups. There are already reports that food scarcity among the refugees and the host communities are driving up the prices of essential food items. What then are the options to increase local food production so that it supplies a healthy diet to all?

Using a food systems approach in our research provides options for increasing local food supply by identifying and answering relevant questions. We focus on finding quantitatively underpinned answers to questions such as: how much land is still available for expanding the current cropping area and increasing food production? What type of inputs and how many are needed to increase current low crop yields? What methods are available to reduce post-harvest losses so more food becomes available for consumers? What options exist to access irrigation water and produce more nutritious fruit and vegetables? Any undesirable environmental effects and other consequences and trade-offs of the various options need to be made explicit if truly sustainable development pathways are to be identified.

Based on available and newly gathered data and calibrated models, we are drafting answers that identify the low-hanging fruit and develop scenarios for development. WUR is developing future food system scenarios together with local stakeholders that will contribute to informed decision-making. Feasible pathways are being explored in scenarios to transform the current subsistence food system in the West Nile so that it can meet the challenges it faces.

Getting the basics right – a joint effort

Although such a quantitative scenario approach makes sense to answer pending research questions, it is easier said than done in practice. Even the most basic agricultural production data is lacking, while digital soil and weather databases often do not have the required spatial resolution to generate meaningful answers. In a context of extreme data scarcity, which is common for less favourable rural areas in East Africa, the approach will depend partly on ‘guestimates’ of local experts. Such guestimates can be modified during the research process based on other insights and new data that we aim to access, for example, via the many development organisations active in the West Nile.

This blog is therefore also a call to those organisations active in the West Nile to join forces with us and exchange knowledge and data. Sharing of data is crucial for developing a sound evidence base as well as food-system scenarios. The process of finding answers together is moving little by little, but having the proper figures which support scenario development is essential for making informed decisions.