This is part 2 of a blog series on food systems. This article was written by Dolfi Debrot.

By nature, deltas offer enormous wealth. Intensive use has destroyed many deltas. This has resulted – especially in the (sub)tropics – in many problems such as flooding, salinisation, sinking and washing away of land. This leads to poverty and hunger among the local population. Through reforestation with mangrove we see solutions in many different areas. In addition to natural coastal protection, scientists from Wageningen University & Research and Khulna University have found other valuable developments in the southwest of Bangladesh that can be used in a Food System approach: an increase in biodiversity, natural adaptation to climate change, food production and growth of employment and the local economy.

Partly due to intensive shrimp farming, a part of Bangladesh’s coast was exhausted and destroyed. Moreover, shrimp production in these fertile areas was only used for export. Of course, local money was made from this, but only temporarily. For every time a part of the coast was exhausted, cultivation moved on, without restoring the over-exploited area. We see the consequences on the news: a vulnerable coastal area and regular flooding. This is partly the result of climate change, but is also due to an unsustainable coastal system, including the felling of the mangrove. Together with scientists from Khulna University, organisations such as Solidaridad and, last but not least, local farmers, we are investigating the opportunities that this exceptionally valuable plant has to offer.

And that special value is multiple. Thanks to sustainable mangrove management, we can offer solutions for food scarcity, biodiversity and climate change. Reforestation shows that coral reefs can recover, the quality of the water can improve, that the coastal area is protected against waves and wind, and that the washing away of land is prevented. And that the nutrients in the soil of the hinterland no longer disappear into the sea and that the salt does not penetrate too deeply into the land. Mangrove therefore not only offers protection to the immediate coast, but also to the inland areas. 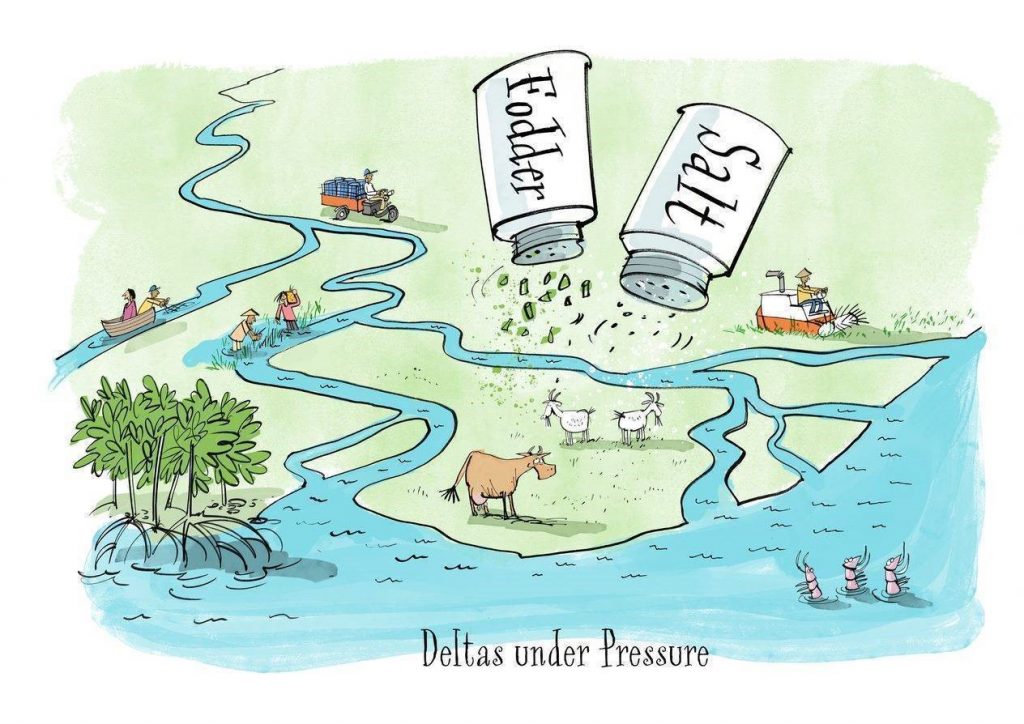 In addition, various projects show good results with, for example, aquaculture. Experiments show that shrimp farming thrives under reforestation with mangroves. We now also know which mangrove species are most suitable for this. These are species like Sonneratia apetala, S. caseolaris, Avicennia officinalis, Nypa fruticans, Bruguiera sexangula. In addition to shrimp, we also achieve good results with various carp-like fish species.
Of course, we do not do this alone! We need local people with prestige, a kind of ambassadors. They have to convince and persuade the local farmers of the knowledge gained from the experiments.

An example: when we go through the deltas together with the shrimp and fish farmers and notice that the fish are mostly in the shade, then it should be explained to them that the shade of the mangrove is necessary for a good, fertile habitat and that this is how diseases can be prevented.

The mangrove is not just about farming in the water. The local Bengal goats, with their light weight, narrow hooves and strong stomachs, can also graze well in the wet, salty environment. This offers opportunities for sustainable agriculture in the deltas where western fodder crops and livestock do not thrive as well as locally adapted varieties. And farmers are coming up with their own ideas on how to grow the local highly sought-after rice variety Oryza coarctata.

We show that mangrove has a positive impact on several aspects of the food system: healthy protein-rich food, food security and sustainable aquaculture. This leads to more mutual equality and increased resilience in local communities; also for the longer term.

Besides the various possibilities for food production, the revaluation of native plants also offers economic growth opportunities if you start from a food system approach. The aforementioned joint study shows a wide variety of ‘delta products’ that can generate (much more) yield. For example, the Nypa melasse is now often offered to the industry anonymously, as it were, in large barrels at a very low price. By offering the same delicious, super organic sweet syrup with a good story in small jars, the local population can achieve a factor 5 or higher increase in profit.

Or take the mangrove species Avicennia. It has leaves that can be used to produce tasty chips. It can also be used to make flour that can be used to bake all sorts of things. Some mangrove species offer medicinal ingredients. Due to the unique characteristics of the mangrove landscape and the possibilities of its use, this plant species is a real game changer!
Mangrove offers in (sub) tropical deltas unprecedented opportunities for climate change, food production, the creation of value chains and biodiversity. Sustainable delta management is a multidimensional problem and therefore requires thinking in multidimensional solutions.