Youth and Indigenous power at the UN biodiversity summit

A WUR delegation has made its way to Montreal to attend the much awaited UN biodiversity Conference of the Parties (COP)! This meeting happens every two years, and much like the climate COP which just happened in Egypt, it is a convening of all the countries of the world to set up governance policies and mechanisms, but this time around the topic of biodiversity. This process happens under the UN Convention on Biological Diversity (CBD).

This particular conference – COP15 – is a very special one since it revolves around the creation of a post-2020 Global Biodiversity Framework (GBF), which will set the policies to halt and reverse biodiversity loss, with clear goals to be achieved globally by 2030. What’s so valuable at the CBD, in my opinion, is that many civil society groups are represented as important stakeholders in the negotiations. This means that women, youth, Indigenous Peoples and local communities, businesses, academia, and faith-based groups are all present in these meetings.

As a master’s student, I am incredibly lucky to be attending this important conference, and to start off right I attended the youth summit organised by the Global Youth Biodiversity Network. This was a two day summit where the goal was to meet other young people, attend capacity building exercises, hear from political figures and more importantly from different actors who are either well-informed about the CBD processes or are people who are impacted by the decisions made in these COPs.

The priorities of the youth group for the outcomes of this COP is to include intergenerational equity, transformative education, and a rights-based approach within the post-2020 GBF. These priorities reflect a focus on human rights, justice, and capacity building as the most effective ways to address the crisis of biodiversity loss.

It is very important to note that so-called Montreal (originally called Tiohtià:ke) is in fact unceded land from Indigenous Nations, and as such the summit started off with a powerful address from Otsi’tsaken:ra, a Kahnawa:ke Indigenous leader. He reminded us that humans are part of Mother Earth, that she cares for us and that we must give thanks to cultivate a reciprocal relationship with nature who gives us life. 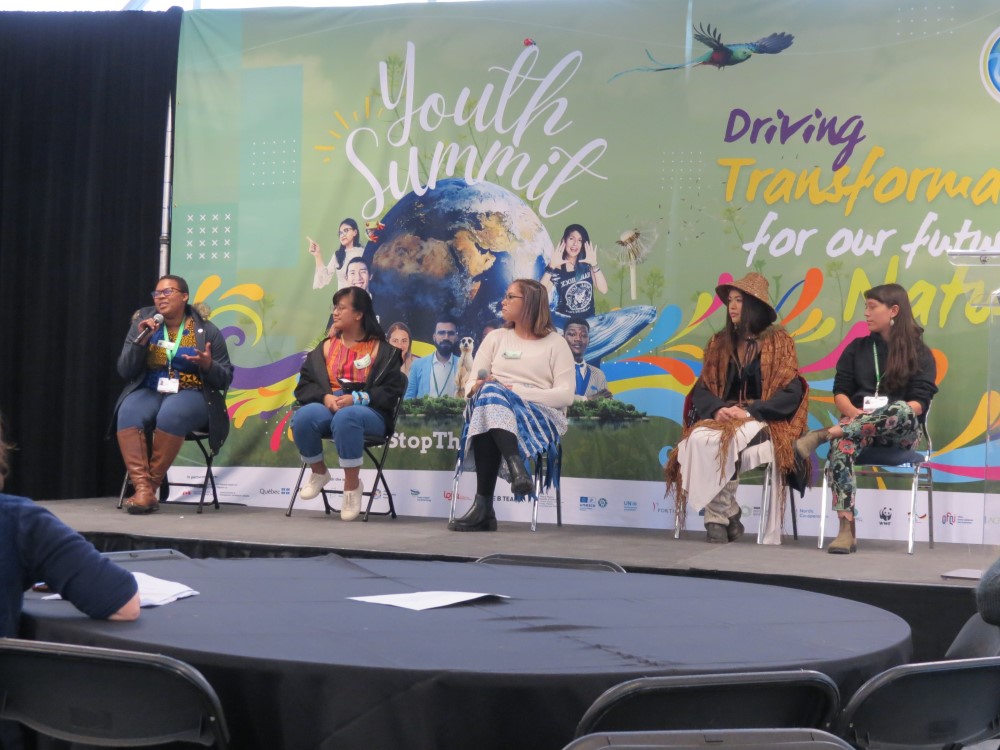 Following his speech, addresses given by political figures all felt a little superficial and out of touch with what is really important: our relationship with nature. This was later echoed by a powerful and emotional panel discussion including five women from Indigenous and local communities from different regions of the world. The interventions made by Indigenous Peoples in this summit reminded us of the core of what we are meant to address with this COP, and that is why they were by far the most impactful moments for me.

A word from Antonio Guterres

We were also paid a special visit from Antonio Guterres in a panel discussion. His belief in and support of young people was refreshing and energising. He maintained that “we live in a world where the economic and financial system are morally corrupt” and that his best hope with dealing with the multiple crises we are facing is with youth. He even suggested that next time instead of asking the UN Secretary General questions, youth should be answering the questions of politicians to be able to give their insights to inform better policies.

This was definitely an energising and inspiring start to the conference, keep your eye on the blog to stay up to date with further developments of the UN biodiversity COP!