In my PhD project I look at processes that influence vegetat...

On our way south

In Fremantle, Australia, we join the Japanese research vessel Kaiyo Maru on December 4th. Before we leave, we have some time to look around the city and buy some last supplies. Usually, we unpack our boxes right after leaving, and organize all bottles, bags and tubes that we brought. But not this time, because the captain predicts heavy weather on the way south. That is why all equipment is tightened up to prevent it from shifting around due to the waves. However, one box remains unpacked as, of course, we need coffee and “stroopwafels” (Dutch caramel cookies) for the transit. We also have to get used to the rocking of the ship and the daily routines on board. After a few days, we feel right at home! 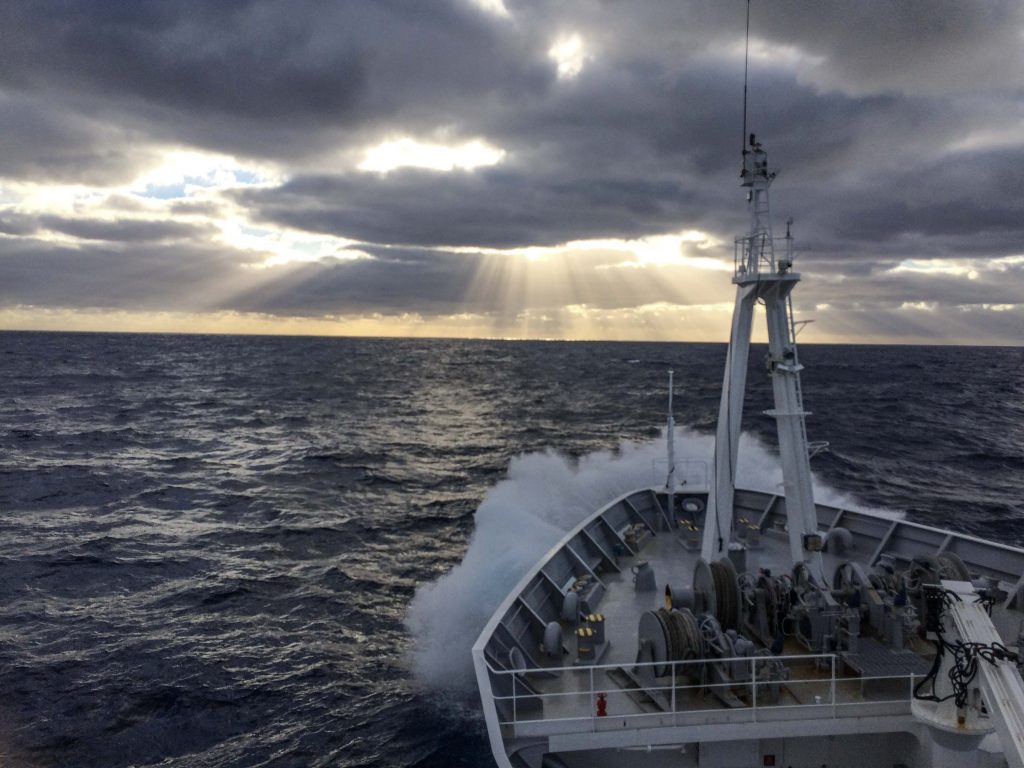 RV Kaiyo Maru has left Fremantle, Australia, and we are on our way to the Southern ocean (© Marin van Regteren/FAJ)

The fishing can begin 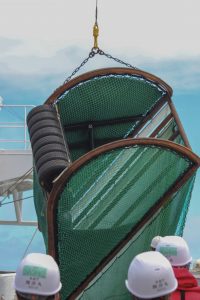 After arriving in the research area on the 15th of December we can start fishing, using both the SUIT (Surface and Under Ice Trawl) and the RMT (Rectangular Midwater Trawl). With the SUIT the surface waters are sampled, while the RMT samples deeper water layers. Because we are using the SUIT for the first time on Kaiyo Maru, we first conduct a trial. The crew tests different ways to lower and retrieve the heavy net into and out of the water safely. This gives the biologists the opportunity the use the first catch to become familiarized with procedures and species. After that we start with the sampling of the planned transect. There is still a few hours of darkness in the area, so it is good that we are in the night shift (22:00 – 10:00h). During these dark hours we catch a lot of krill using the SUIT, which shows that they move to the surface during the night and are partly missed in the deeper fishing RMT. 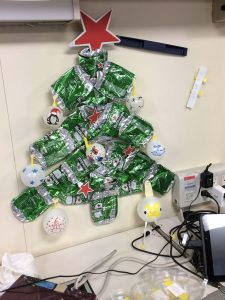 Because half of the people work during the night and the other have during the day, a Christmas party is hard to organize. Many people brought Christmas decorations. We didn’t, so we have to be creative. Green cans give us inspiration to make a Christmas tree out of. Balloons, made of plastic glove fingers, work very well as tree decoration. This way, the Christmas tree becomes a nice group project. During the change of shifts we take some time to do a small Christmas celebration together. Our Japanese colleague bought us a gift and also our American colleagues have a surprise. After dinner we get a nice piece of cake. All in all, it has become a very merry Christmas!

We are often inside the ship, sorting and counting caught animals. Some colleagues are, however, working from the bridge, doing research on the distribution of birds and mammals. Sometimes they call when a whale has been sighted, which is cho sugoy (very great). This time there is a humpback whale which is feeding on krill. Its mouth is enormous and it is a fantastic view! Other times, when we are not fishing, our colleagues help us to learn some Japanese, start with basics such as good morning, thank you and very nice. Making correct sentences will be a huge challenge for the rest of the journey.

Not all fishing stations are planned. Sometimes we do a target trawl. The echosounder, a kind of sonar for under water life, shows a signal when there is a high concentration of animals present underneath the ship. Because different species can give a different type of signal, we attempt to catch the animals using the fishing nets. This way, research can be done to recognize the species that give a certain signal on the echosounder.

Antarctic krill is a commercially harvested species of which recognizing the signal would be useful in order to have an easy way to make a stock assessment. Not all swarms that show up on the echosounder turn out to be Antarctic krill. Sometimes it comes from another, smaller krill species, Thysanoessa macrura, and sometimes it is something completely different such as salps. Salps are organisms that hook together to form long chains. Due to their jellyfish-like structure, we do not like to eat them. 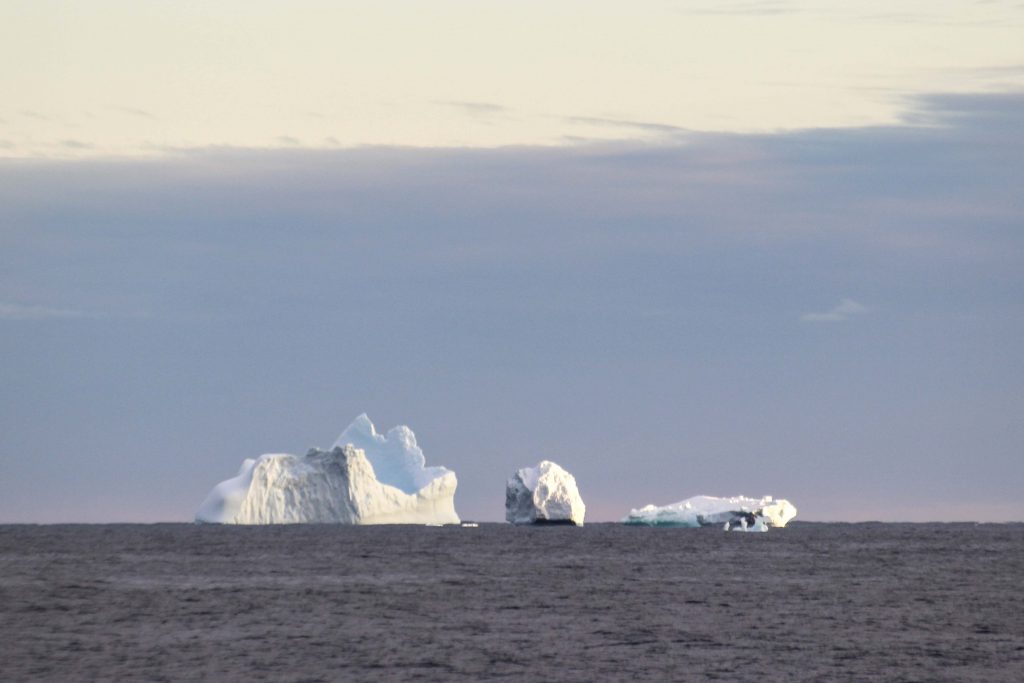 Because we are in the night shift, the new year started during working hours. We were not finished measuring krill yet. So, we counted down and wished everyone a happy new year, but then had to get back to work. Later, when sailing to the next station, we had the time to go around the ship to wish everyone , in our best Japanese, ‘akemashte ometeto gozai mas’. It is a tradition to stay up until the first sunrise of the year during which new year’s wishes can be made. After processing the next SUIT catch we enjoyed a traditional Japanese breakfast.

After 6 weeks, the first half of the journey is finished. The ship returned to Melbourne on the 16th of January to get new supplies. This gives everybody the chance to head into the city before leaving for the second part of the survey. During this second half we will continue the fishing on the second half of the planned transects, to cover a large part of the east side of Antarctica. Everybody is looking forward to it! 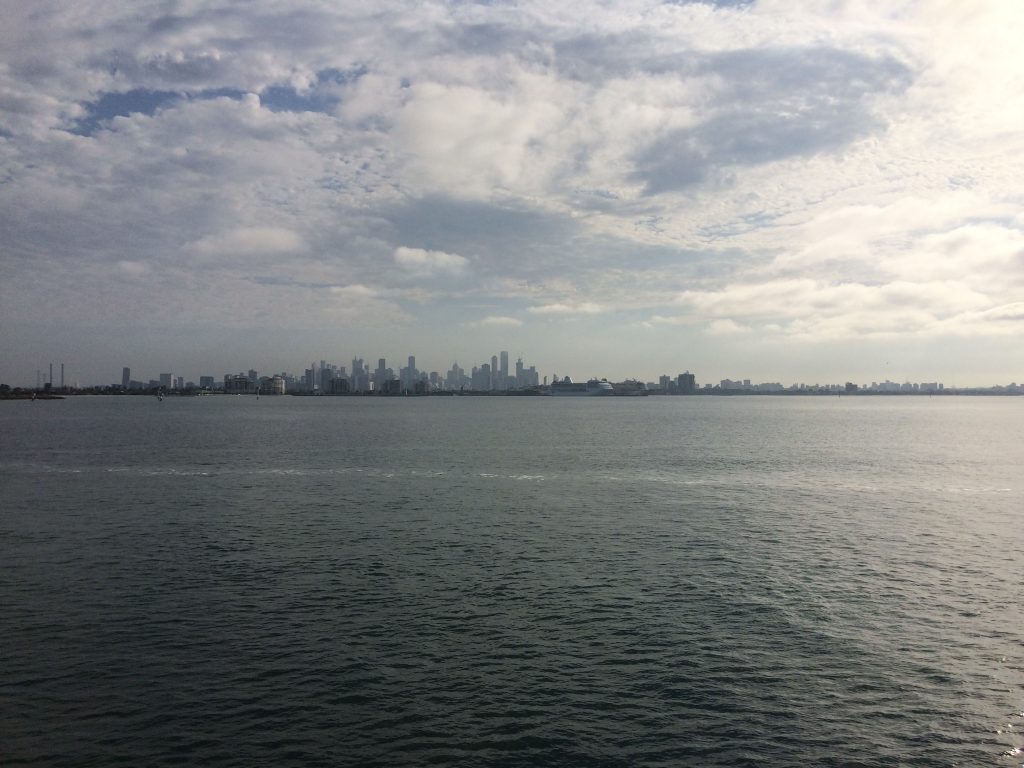 In my PhD project I look at processes that influence vegetation establishment on salt marshes. This research is embedded within the Mud Motor project, that looks at opportunity to re-use harbour dredge disposal beneficially to enlarge salt marsh areas and both its ecological and physical consequences. Salt marshes protect the coastline by their wave attenuation, a nature-based flood protection, in addition to being a vital area for many unique floral and faunal species. The potential for marsh expansion lies at the outer edges of the marsh, the transition zone from marsh to intertidal flats. This is a dynamic area affected by (among other variables) salt stress and occasionally extreme dry conditions, frequent tidal submergence, and deposition and erosion of sediment.

Specifically, I look at the interactions between bioturbating soil fauna, vegetation establishment and sediment dynamics, using lab and mostly field experiments. Bioturbation by worms can bury seeds and cause freshly sprouted seedlings to tumble, thereby reducing vegetation establishment. Erosion may deplete the seedbank and transport viable seeds away from the transition zone. Sedimentation can lead to seed retention but also has the potential smother seedlings or bury seeds too deep for surfacing once germinated. Spatial and temporal patterns of seed availability, weather conditions and sediment dynamics are in constant interplay that determines salt marsh reduction or expansion.