By: Erik Horstman · 22 January 2020
Category: Resilience of the richest reefs

While my colleagues ventured around Arborek yesterday to talk to local orang orang, I explored the mangroves around the fringes of this tiny island village. I first spotted a small patch of established mangroves, and then I found out that there were plenty of younger trees around, mostly growing in straight lines along the beach. Obviously, these mangroves have been planted by the Arborek people, getting them to work their magic by absorbing wave energy and retaining the sand on the beaches.

Funnily, whereas in developed countries mangroves are sometimes considered a nuisance blocking the views of waterfront properties, here on Arborek the trees were planted right in front of the homestay huts. I guess the local people understand that there’s no point in a million-dollar view if you’re not safe staying there. 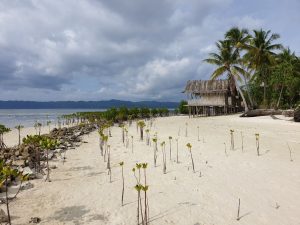 Today I got to introduce some of my fellow-expedition members to the magic world of mangroves on the island of Gam. As we approached the shore, we noticed several occupied homestay huts in between the mangroves. So much privacy for these lucky tourists! Except for this very moment that a zodiac full of scientists with their cameras ready zipped past… Regardless, we were on a mission. We headed right into the mangrove fringe where the extremely dense network of stilt roots of the mangroves stopped the zodiac. I got in the water and showed my colleagues how a mangrove scientist gets about in such an impenetrable environment. 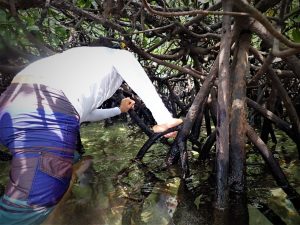 We found some sponges and fish on and in between these mangrove trees. We also noticed how the water near the mangroves was quite murky. Mangroves like these environments and act as filters for runoff from the land into the sea. Right in front of the mangroves we found seagrasses and only a few meters further out into the ocean the coral reef started. Three completely different species, living in harmony each in their own dedicated niche. 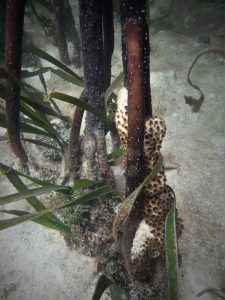 Talking about niches, my colleagues enjoyed their mangrove exposure. Learning about each other’s disciplines is one of the many goals of this expedition. Educating local people about the value of their ecosystems is one of our other goals. Needless to say I was very happy to see the people of Arborek embracing mangroves for coastal protection, instead of reverting to more conventional but less natural solutions. Small steps… For the many challenges ahead, we are now on a choppy transfer to Misool, trying to find some more pieces of the puzzle towards Resilience of the Richest Reefs.