I am a marine biologist with a long-held interest in tropica...

Mostly when you hear about coral reefs in the news, it’s bad. Disease & death. Luckily there are a few bright spots in the world where the reefs are still quite healthy. One of those areas is Raja Ampat, Indonesia. In 2016 & 2017 there were global bleaching events, where worldwide great numbers of corals died as a result of increased water temperatures. The reefs of Raja Ampat proved resilient and the corals did not collapse.

Our question is why? What makes the coral reefs in this area so resilient and what can we learn from them for the conservation in other areas?

One of the reasons is that the reefs are in the epicenter of the world’s richest marine biodiversity. To give some context, almost 600 coral species have been identified in Raja Ampat, compare that with about 100-150 in the Caribbean. The area is home to two species of manta rays, numerous sharks and all kinds of wonderous creatures such as the flasher wrasse. There are hectares of luscious green mangroves and seagrass areas, and reefs in different depths.

Simply put, the area is spectacularly stunning, both above the water and below. As such it is being highly promoted as a top tourist destination. I even saw advertisements for Raja Ampat in Centraal Station in Amsterdam a few years ago. The first time I went to the region in 2007, approximately 900 tourists visited per year. Since 2012 the access to the area has increased and so have the tourists, now more than 30.000 per year (see graph) and growing. 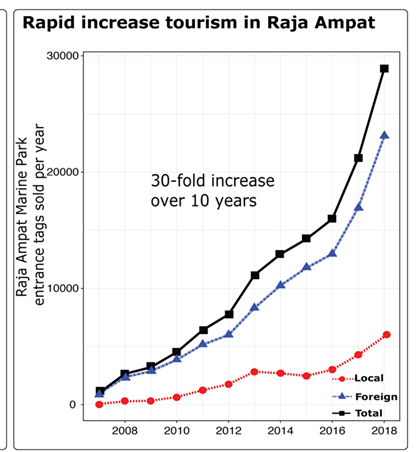 Tourism can stimulate the local economy, provide revenue for patrolling and conservation activities. However, if left unregulated, tourism can harm the reefs. For example, more tourists, mean more toilets, which mean more nutrients in the water if there is no proper sanitation. This can cause algae and bacteria to bloom in the reefs, as well as coral disease.

With a diverse team of scientists, conservationists and policy makers we will conduct a reconnaissance trip of the area and a 10 day workshop on a boat. While most coral reef studies focus on pathways of degradation, we aim to beat the system to the punch and use our gained knowledge of interactions and dynamics of the local social-ecological system to identify pathways to build resilience against current threats such as climate change and increasing tourism.

I am a marine biologist with a long-held interest in tropical marine biodiversity. A key question of my research is how communities of species adapt in response to environmental change over ecological and evolutionary timescales.

Through collaborative research projects, I take a multi-faceted approach to biodiversity by applying techniques of genomics, bioinformatics, environmental analyses, paleontology, and taxonomy. These combined data sets allow a detailed dissection of the relative roles of ecological speciation, colonization, habitat filtering, and isolation in the formation of marine communities.

By focusing on a conceptual area of broad relevance, my research bridges multiple domains: while I am a marine biologist, I work closely with terrestrial biologists interested in similar questions; my work is based in the tropics, though the principals apply to temperate systems as well.