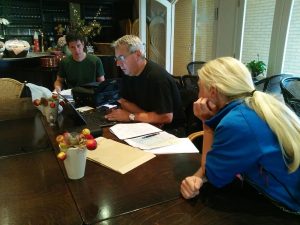 The aerial survey component of the SCANS-III survey officially started on 27 June! A lot of people have worked towards this moment and the last weeks and months were filled with intense preparations. Getting equipment ready, finalizing transect lines & protocols, designating flight plans per team and getting all teams to their starting points.

This is Team VI with the double observer team setup. The plane has two sets of bubble windows allowing two observers to work in the back and two in the front. The two data recorders are located in the middle.

The data will be collected simultaneously by seven aircraft and their aerial survey teams. Each one of those seven teams consists of three observers and the pilot. One team (team VI) will fly with two observer teams on board to conduct an experiment testing different data collection protocols. Over the next 30 days these planes will be covering the whole North Sea and adjacent shelf waters to the north, west and south. 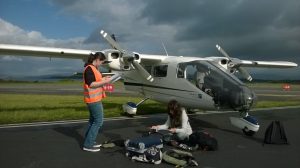 A last read of the protocol by Team V before going on board. Six teams use this type of plane – a Partenavia P68 – equipped with bubble windows. (Photo: Olivier van Canneyt)

The 24 observers are highly experienced in aerial surveys, coming from at least six nationalities – some of them have several passports!  Each team has a priority plan to cover specific sets of surveys that have been designed for each survey block. There are a total of 26 blocks and the aim is to cover each area twice if the weather allows, but at least once.