‘We currently get most of the proteins we need from eating meat. However, seaweed cultivation is much less damaging to the environment than meat production. Giant seaweed farms have the potential to provide the entire world population with protein. Thereby saving our scarce land-based resources. Seaweed processing platforms will replace the oil platforms of today.

So is mariculture the future? I believe it is: there are plenty of opportunities waiting. Let’s eat more seaweed! 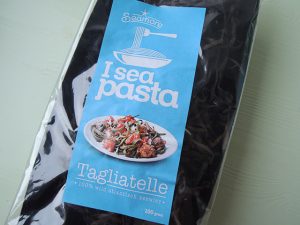 ‘I must admit, I had never eaten seaweed myself before I started my seaweed research five years ago. The first edible seaweed I found was in an organic store; a French product that you had to soak for hours before you could use it. It wasn’t very tasty… Today there are much better products available, such as The Dutch Weed Burger or Seamore seaweed pasta.

Seaweed is currently mainly used in the Netherlands in thickening agents for various products, such as custard. However it is also a viable dietary alternative to meat. Large-scale seaweed cultivation has the potential to provide the entire world population with protein and so save our scarce land-based resources. But Dutch seaweed could also be used to produce animal feed, medicine, high quality foods and bio-based plastic.

What are the opportunities for combining functions, such as seaweed or mussel cultivation under wind farms?

Many products that cause too much damage when produced on land can safely be produced at sea. But only if we take due care of the involved ecosystems. We are using the sea more and more intensively, not only for fisheries and transport, but also for energy production and recreation. This raises new questions: How can we coordinate all these activities harmoniously? What are the opportunities for combining functions, such as seaweed or mussel cultivation under wind farms?

If we do this right then we will be able to make a transition from agriculture to mariculture (fish, shellfish and seaweed farming). This will go hand in hand with a shift from global to local food production. The North Sea is ideally suited to seaweed cultivation because it is packed full of the nutrients that this plant needs. But it is so busy with shipping that the larger seaweed farms will have to be created elsewhere. I anticipate that in the future we will cultivate seaweed for various production chains further out to sea. The seaweed will be processed on locations in special production plants: seaweed platforms instead of oil platforms. 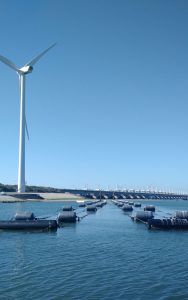 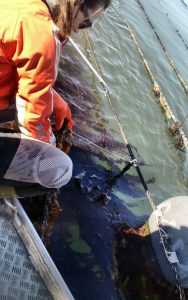 Positive effects that seaweed farms have on ecosystems

It is important to stress the positive effects that seaweed farms have on ecosystems which can provide us with useful ecosystem services. Seaweed absorbs excess nutrients, which slows the growth of algae and so helps us to protect the marine environment. Seaweed beds also prevent sediment disturbance and help to damp waves. This could result in less investment in coastal protection being needed.
But seaweed beds are also ecologically and recreationally beneficial. Divers are always enthusiastic about the marine life in seaweed forests and when seaweed is introduced to an area it often brings more and new species with it. The North Sea is currently not much more than a giant sand pit: anything you add to it will result in a more diverse ecosystem.

Plenty of potential in seaweed cultivation 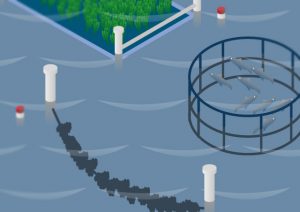 There is plenty of potential in seaweed cultivation, whether it is for public or private goals, and whether developed by the government or businesses. These opportunities have not been fully explored because we have not tested seaweed cultivation on a large scale yet. No one is prepared to take the risk of establishing a major pilot: the government and the business community point at each other and so nothing is done. Before we can produce seaweed on a larger scale in the North Sea we will first need to find out the best ways to cultivate and use it. A large-scale pilot will teach us much more than smaller experiments can. Of course, the economic feasibility will depend on its usefulness as a high grade raw material, for example for human consumption. So like I said: We need to eat more seaweed!’

More information, full paper Wageningen UR: The economic feasibility of seaweed production in the North Sea