The Drain of the Gulfstream

After a stunning voyage from Jan Mayen, which took us along the side of the pack ice, we arrived at Spitsbergen. Since then, we have carried out beach litter monitoring at two locations. First at Poolepynten, and later at Sarstangen, both on the east coast of Prins Karls Forland. This long-stretching island on the west coast of Svalbard is named after the Scottish hero Bonnie Prince Charles, but the Norwegians later renamed it Prins Karl.

At both monitoring locations, the weather is quiet, so all passengers can get ashore with the zodiacs. While the other passengers take a hike to the walruses, which are present at both locations, we get started with monitoring the beaches.

As the other passengers head towards the walruses, we go to the selected locations for the monitoring. We always walk with an expedition guide. Not only because they are interested in the topic of marine litter, but also because they are armed with a gun and an alarm pistol, as a precaution in case we encounter a. In Svalbard, there are more polar bears than citizens, so the chances of meeting a polar bear are high.

During our first monitoring, we are suddenly surprised by a loud sniffing sound. Is it a polar bear? We look in the direction of where the sound is coming from and suddenly see two large bulky animals rise out of the water – walruses! They follow us intently while we pass by during our survey, only a few metres away. 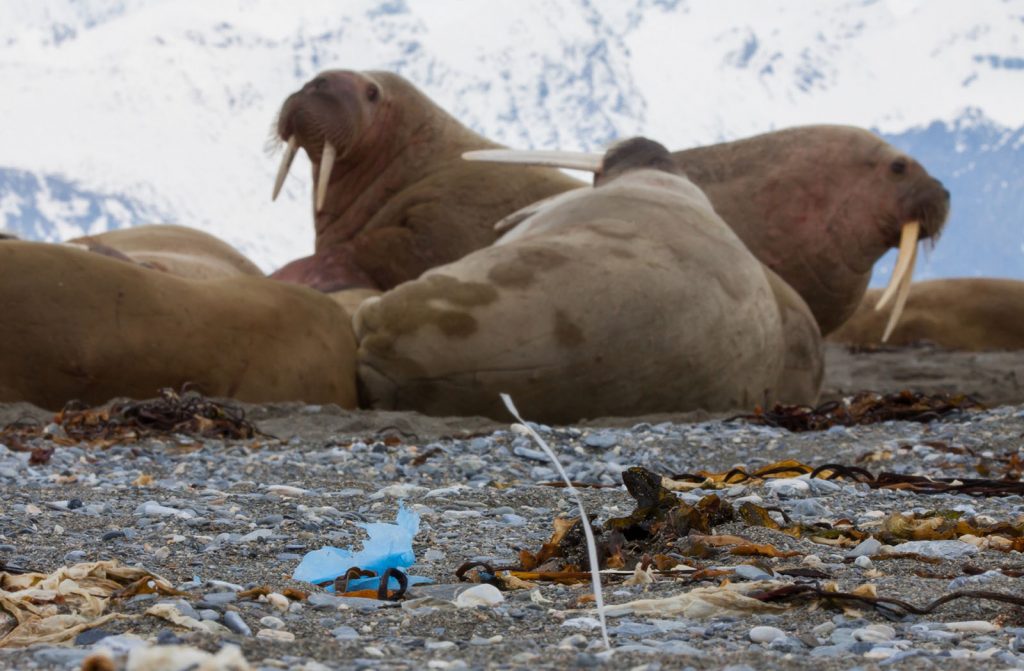 Parts of the beaches that we monitor are still covered by snow and ice. This prevents us from monitoring these areas. Nonetheless, we still encounter a lot of litter items, including a steering wheel, quite possibly from a speedboat. Attached to it are large barnacles, which seem to have been there for a long time. So who knows how long this wheel might have been floating at sea before it arrived here at this beach.

The finding of the steering wheel demonstrates that a part of the litter on these northern beaches comes from far away. On its way to the North, the Gulfstream will pick up any litter item that floats. When these items arrive in the Arctic, they will remain here. This is why the amount of litter in the Arctic is building up every year. As a consequence, the sea around Svalbard ends up becoming the drain hole of the Gulfstream.

Not only is the litter building up annually, the plastic items also disintegrate into ever smaller pieces. Subsequently, the amount of litter multiplies, causing the overall litter content in these waters to increase more than would be expected based solely on the original influx. Disintegrated pieces of plastic were clearly visible on the beach at Sarstangen. On the 100m stretch of beach we counted no fewer than 660 pieces. By comparison, the average number of small pieces of plastic on beaches in the Netherlands is 73.

The original plan for our itinerary during the next couple of days has been changed slightly. Because of still present sea ice in the north of Svalbard, we are not able to visit several beaches that we selected for monitoring before we went on this trip. Because of the ice conditions, the expedition leader has decided to head to the southwest of Svalbard instead. There we will visit Hornsund and Bellsund. During the autumn, Bellsund is home to a part of the Russian fisheries fleet, which may be one of the sources of litter in this fjord. We are interested to see what will be the situation in this area and will keep you posted about the latest results.

The expedition and the blog Arctic Marine Litter is a collaboration between https://weblog.wur.eu/good-college-application-essays/and homework help masters degree

More information about this expedition