8 Habits I Picked Up Living in The Netherlands

Helen is an international student from Canada. She studied N...

I am always curious how someone’s experience in a different country and culture has an impact on their behaviour. What type of local habits do they pick up and what useful thing do they learn from observing those around them? Here are some habits I learned from observing Dutchies and useful habits I learned to make day to day life easier living in the Netherlands. 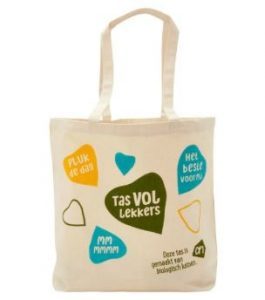 1. Grocery shopping with a tote bag

This lovely sustainable habit seems ingrained in general Dutch society. With plastic bags costing between €0.10-€0.30 on average, it is a no brainer that most people do not want such an extra expense. There has been multiple times when I regretted not being any of my own bags with me. The consequence is an overstuffed backpack and full arms of a cereal box, a bag of apples, and at times toilet paper. My recommendation: get yourself some reusable cloth bags and always have one in your backpack. They are often given away as freebies at events. 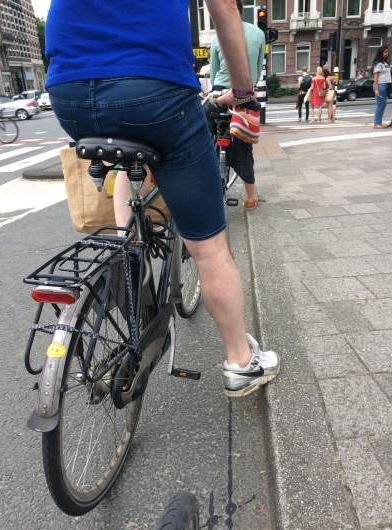 The curb food stand is a term I like to call when one rests their foot on the street side when stopping their bike. An example can be seen in the picture below. This Dutch position makes stopping hassle free because you do not have to hop down from your seat. It can be proven that it is not just a Wageningen-thing since the Bike Curb Foot Stance is also done by many people in Amsterdam where I am currently completing my internship. Give this a try and see if it works for you.

One thing I like about the Dutch is that they are no-fills and like to keep things simple with food. It is common to see students bring ingredients from the nearby grocery store. Some examples I have seen include: a bag  of sliced ham, a jar of peanut butter,  a butter knife; bread buns, a bag of baby carrots, hummus; a carton of yogurt, a bottled smoothie, fresh orange juice and such. Here in Amsterdam while completing my internship, many of my colleagues jump into the Albert Heijn and concoct a dish out of a bag of salad, a bag of grated beats, shredded cheese, a jar of olives and a can of tuna.  When I forget to bring my lunch to work, my go would usually be bread, hummus, a bag of salad and a bottle of fresh orange juice.

When living with my family in Canada, my parents used a water filter and at times a Japanese Zojirushi water boiler. I too looked for a water filter when I first arrived in the Netherlands. They were scarce in the grocery stores, most of the time I could not see them sold. I watched my Dutch friends regularly fill their water bottles from the sinks and water fountains. When living in my first sub-rented dorm in Haarweg, I watched my corridor mates also drink straight from the tap. Here in the Netherlands, water is safe to drink and has a very neutral taste.

I have never been so tech-savy in Canada as the train schedules were on small pamphlets, bus schedules on the transit website and weather predictions on regular Google. For most of my needs there are phone apps that make daily applications easy.

Taking the train in the Netherlands is the best way to travel between cities. The Reisplanner phone app is handy to check the train schedules and to see where you may need to transfer. The app 9292 is also widely used for travel planning – it also includes bus schedules witch Reisplanner does not.

Another useful phone app is the Buienradar. With the weather in the Netherlands being unpredictable most of the times, Buienradar is used by many people as it can estimate the hour of when rain is expected.

When going to larger cities such as Rotterdam and Amsterdam, I find it difficult to bring my bike with me on the train. It is also necessary to buy a ticket for my bike when bringing it on the train. An alternative I found it to use bike sharing bikes such as Mobike in Rotterdam. You simply need to download the Mobike app, deposit a minimum of 5 euros. It costs 0.5 cents every half an hour and you can lock it on the street when you are done.

Further, bank accounts can also be managed with a phone app. Search your phone by the name of your Dutch bank account for example ABNR AMRO, ING, Rabobank, etc.

Even on a decent day, my friend and I prepared cardigans for what turned into light rain and gloomy skies

As with the unpredictable weather, sometimes it is hard for me to believe the sun will shine the whole day. I personally like to have a jacket or waterproof windbreaker with me when I am travelling to another city or out for most of the day just in case. A small portable umbrella could also be perfect for those who do not like to carry an additional piece of clothing –however, it is much harder to bike with an umbrella when it is both raining and windy.

7. Stopping for the sun

When the sun comes out after a season of cold, rain and furious wind, the golden rays bring people out on the grass, on the balcony and to café terraces. When biking through Wageningen, I have seen Dutchies prop out their coaches directly at their door front to sun bathe and enjoy the weather. No shame. Now sunny days are very special to me and I also want to enjoy them to the max! During my internship in Amsterdam now, a warm beautiful day calls me out to walk in the park and to discover the small backstreets around my new neighbourhood.

At the end of the first party I went to in Wageningen, I saw some students collecting bags of glass beer bottles. Since then I learned a useful tip, recycling equals money. Depending on the bottle, usually for glass beer bottles you can get a return of 0.10 cents each and some large plastic bottles is €0.25.  Look on the back of the label in the fine print for a small “Statiegeld” followed by a “€0.10” or whatever amount it may be. The general idea is to bring the bottles back to the same grocery location you bought the drinks from.

Helen is an international student from Canada. She studied Nutrition in her undergraduate degree and is in the last year of pursuing her master degree in Food Quality Management at Wageningen University. She has lived in Taiwan, USA, Canada and France and enjoys meeting people from all over the world. She hopes to share her experiences living in the Netherlands with a casual and light-hearted approach.