This is the second time that I live in the Netherlands. My other experience was making a minor as part of my graduation in Breda. And when I returned to Brazil, I missed some things that I did not value so much at the time. The biggest one was the freedom to ride a bike … anywhere!

Freedom in a broad sense. Freedom for feeling safe. Safe in traffic, safe as a woman. Freedom because of accessibility. The Netherlands is a relatively flat country, the difficulties of pedaling are low. Freedom for the options the country offers. There is plenty to do with easy access, including the option to just cycle fast to the nearest market because it will close in 10 minutes.

When I came back here to start my master’s program, I made it a priority to take biking trips to know the country at a slower pace than by train. By coincidence or not, I met in Wageningen friends who also had the same will. We have made some short trips together that have been great not only to know the places but to know us more too. Between us and ourselves. In addition to saving with trains!

Here are some tips for those who want to plan your first bike trip: 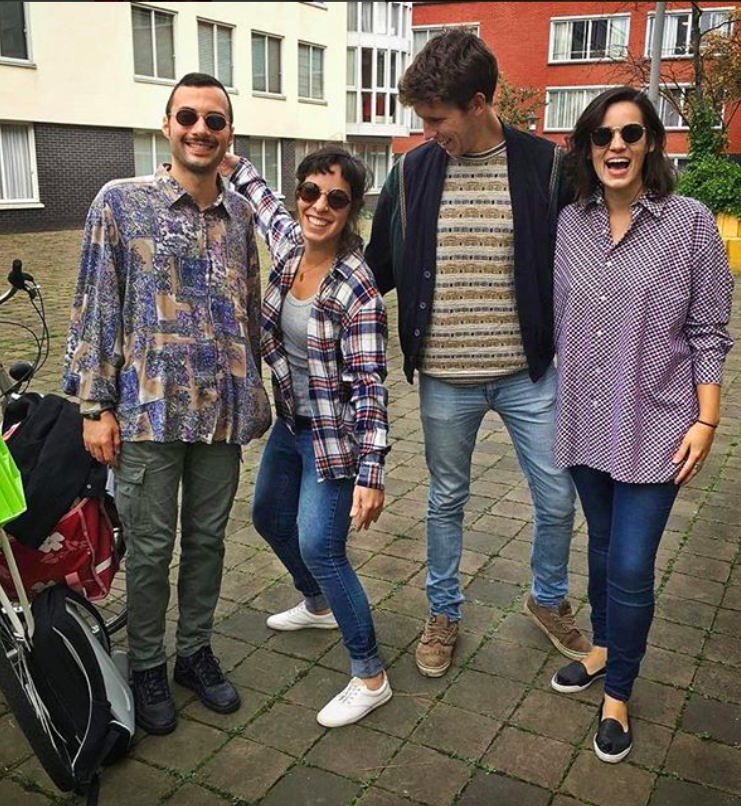 One tip is to increase the distances gradually to test your limits. How about going to the Rhine? And then Arnhem? Maybe even the National Park De Hoge Veluwe? You choose! I recommend not doing more than 100km per day, but it depends on each person. On the trip I did with my beloved housemates, Marco and Luca, we decided to do 130 km to Den Haag in a single day and it was a bit difficult. Not so much because of the distance, but also because of boredom. In the end, we just wanted to get there to do other things. Luckily our friend received us with warm food. Very important to eat well too! 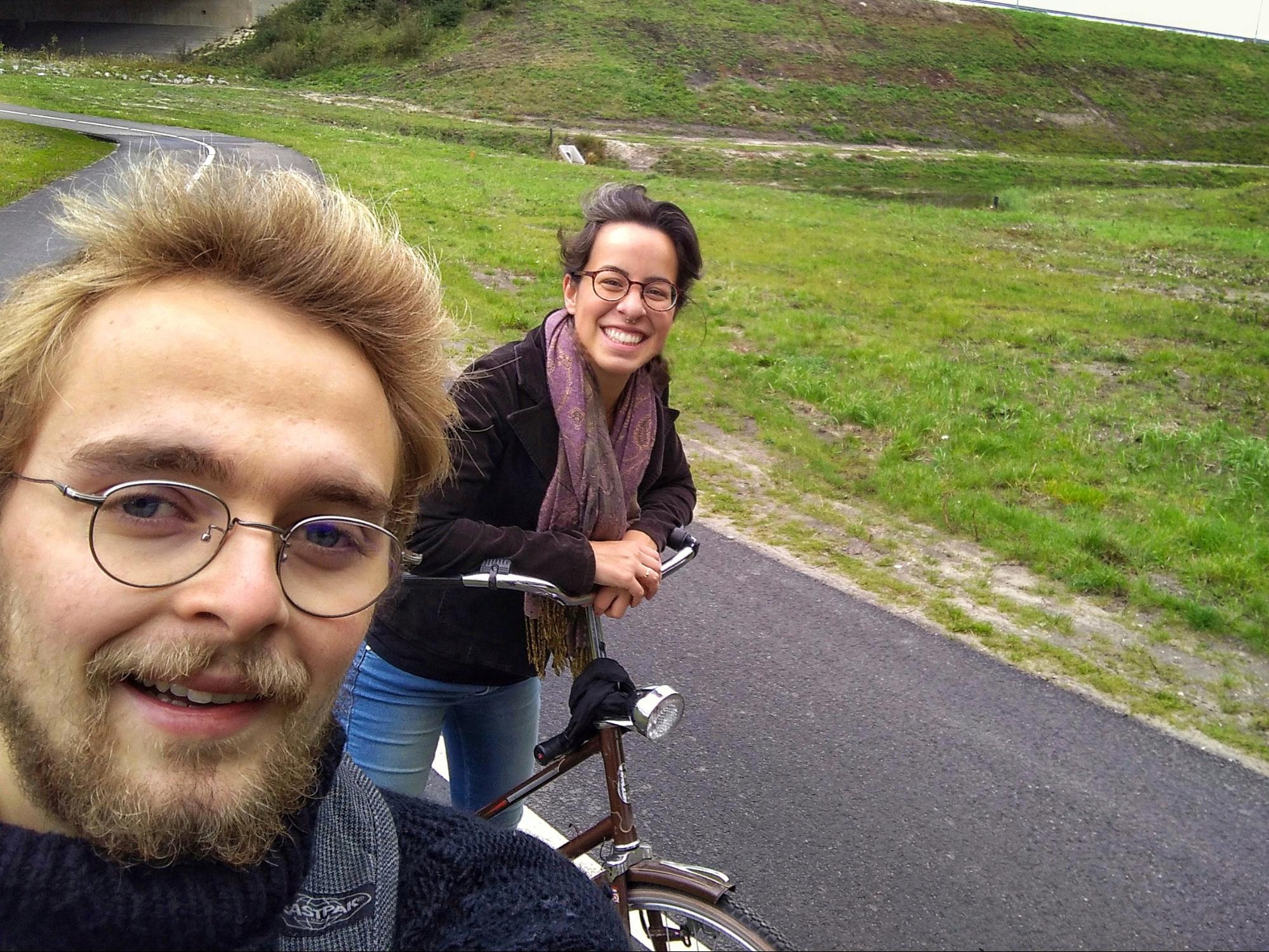 Photo: between Amsterdam and Wageningen with Rens, 90km

Technology and I are not very close. Sometimes I argue with it, sometimes it argues with me, but I’m learning to make peace. My first bike trip I was totally unconcerned (or rather unprepared) for the ride, but I learned from my friends a way to track the way through offline maps. Yes, society learned this only at the end of 2017. Better late than later. 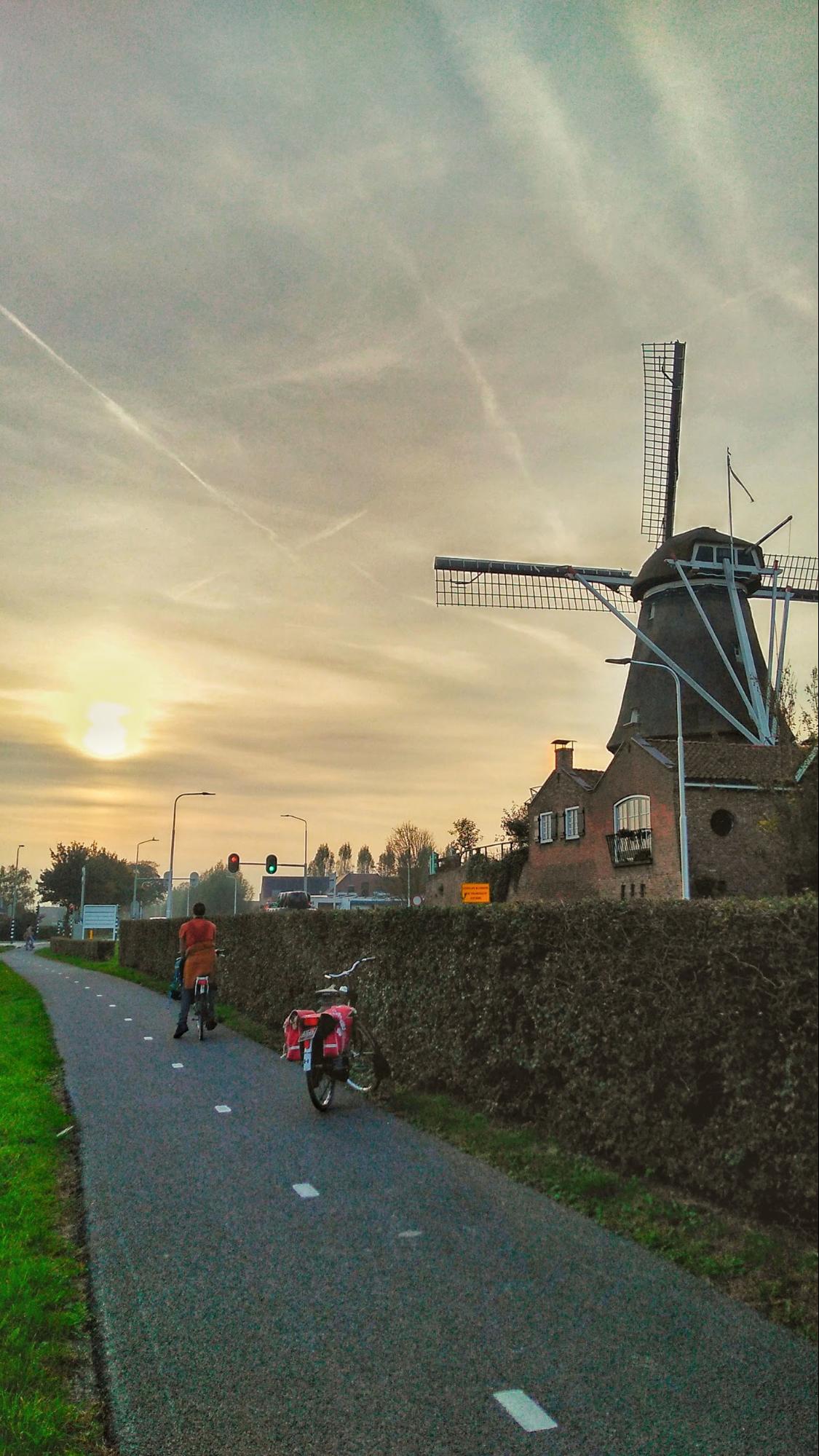 Photo: windmill on the way to Den Haag

For those who do not know, with smartphones it is possible to download Google Maps offline, so you do not need the internet to monitor the way. Only with the GPS working can you follow the path. And the best part, you are in the Netherlands, the GPS will work. : D

But what if I do not have a smartphone? Or if the battery runs out? Yes, it happened to us once everyone’s battery ran out. But again, you are in the Netherlands, where they have an incredible infrastructure for bike paths. Every 1 km there is a sign pointing to where you should go to reach the next city, even if there are sections under construction. There are two types of signs. One is red, with the signaling to the cities. And the other is green, showing more tourist routes, especially off the roads to see landscapes with nature. 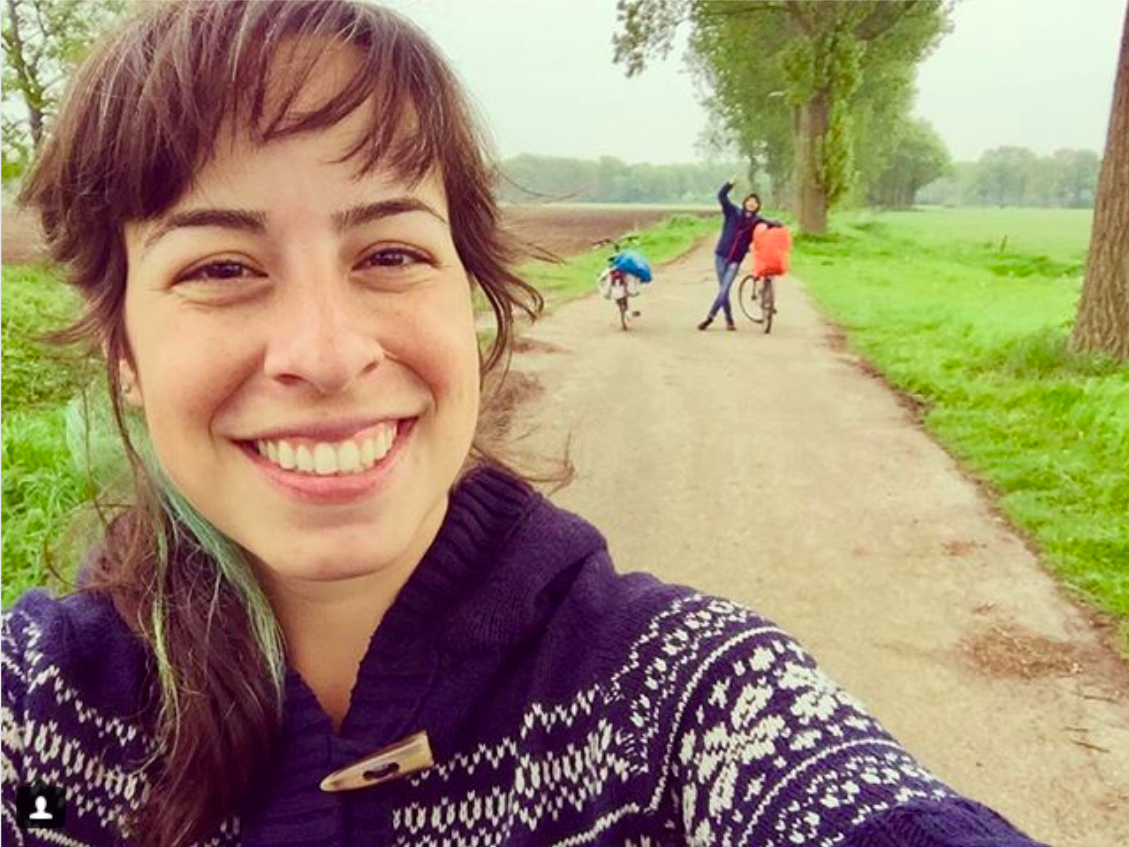 Photo: park in the south of Eindhoven 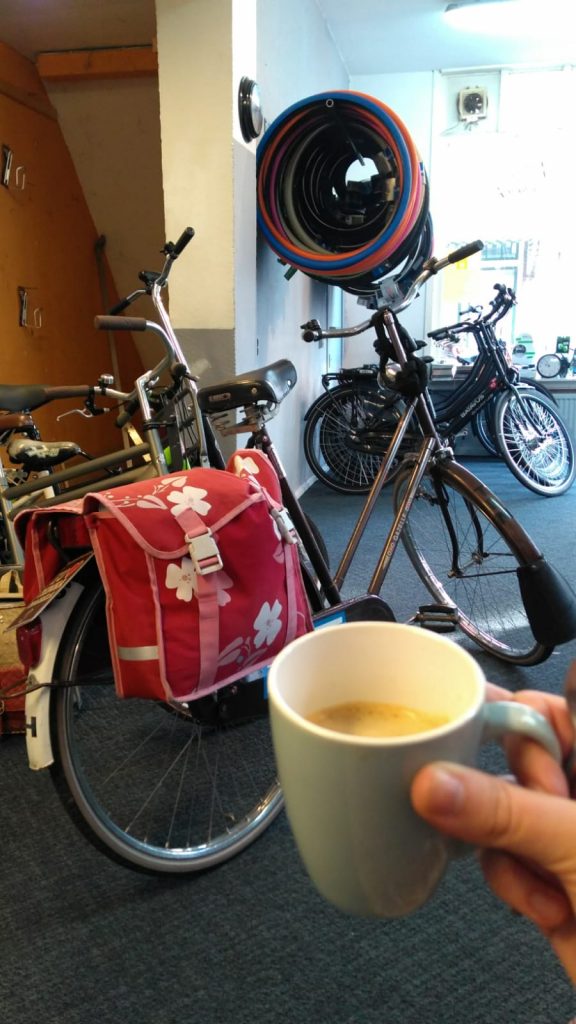 Photo: fixing my bike in Utrecht

Before you go, it’s important to take a look at your bike! Tires, brakes, chains, everything in order? It is quite possible for the bicycle to break on the way. Mine, as it is old and second hand, increases the chances even more. And I had! Even doing a review before … But anyway it is good to do it to avoid even more unforeseen!

It is also important, in addition to the review, take extra equipment, as along the way most of the roads will be outside the cities: extra camera, lights, pump the tire, … And do not forget to research before how to do basic things like changing a tire! This can be of great help! 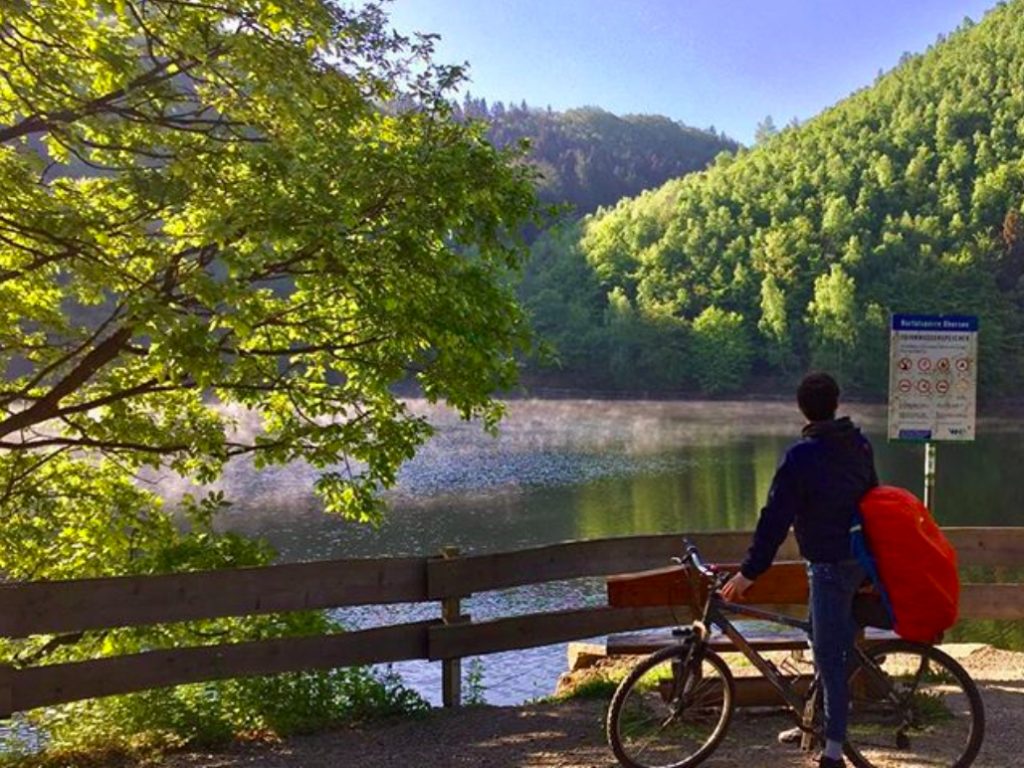 Freedom is a bicycle trip… I hope now you feel more confident to enjoy!