Namaste, I am Varsha Sethuraman from Bengaluru (Bangalore)...

Imagine coming to new country and you do not have your own place to stay! That was my start at Wageningen 🙂 As soon as I accepted my application, I simultaneously began to look for a place to stay. I have heard stories about the insufficient housing situation at Wageningen. So, I quickly registered myself at Idealis (now known as http://room.nl). It indeed is difficult to find a suitable place to live.

My ranking was always a rather large number and finding a place away from Wageningen made it rather difficult. However, I did not give up and after weeks of applying I accepted new rooms, named Nano at Dreijenplein.  The rooms are:

Furthermore, living abroad and lesser days to move to Wageningen made the situation far more worse. However, finally I accepted the only student accommodation available to me. A 17m2 room for a hefty price of €381.75, with no subsidy and a bike ride of 12 minutes to the University.

I received my keys to Nano a 16 days after I arrived to Wageningen, since the building was still under renovation.

It is an old Wageningen Campus renovated to a student accommodation 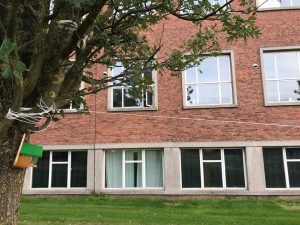 It is the old Wageningen campus, and a partnership between Wageningen University and Research and Socius, and is a student accommodation for both Dutch and International students. The amenities are shared (shower, toilets and kitchen) and a majority of the accommodation have a regular cleaning schedule.

The corridors, rooms and the kitchen are comparatively big. Also, if you are lucky, most corridors have a shared cabinet for cutleries, so you don’t have to pack any from home! 😉

how to teach essay writing effectively

What happened at Nano?

After sub-renting a couple of rooms for two weeks, I was very excited to finally move into my own place. After collecting my keys to 10A-27, the old Microbiologie department, it was rather a bit of a disappointment for me. The room was handed out in a pretty messy condition. However, the furniture is great and comfortable. In addition to this, the other student living in my corridor are great 🙂

View from the room, is also another benefit from living at Nano. Although my side of the building did not have sunlight into the room, it still smelled fresh every time I opened the window 🙂

To make living at Nano much easier and happier, most of us at the corridor will cook together or at least have one meal together. Over the weekends, there will be potlucks or parties organized.

We also celebrated Sinterklass (The Dutch Christmas), exchanged gifts and poems. After our celebrations, we decided to make our corridor memorable and colourful. So, we painted our walls with our foot and flag beside it 🙂

However, after nine months of living at Nano, I got an opportunity to move to a better place. But, having lived at Nano was a great experience and I have met some really amazing people. We still are in touch and organized a BBQ during the summer 🙂

Namaste,
I am Varsha Sethuraman from Bengaluru (Bangalore), from the Southern part of India :) I pursue my Master's in Climate Studies
This is my first time living away from family and it has been an amazing journey so far. Will take you through most of my experiences in Wageningen.
I hope you would enjoy reading them :D