Living soil: basis for our life

At Wageningen Environmental Research, I am head of the team ...

”The soil is the poor man’s tropical rain forest”

These words by the Scottish biologist M.B. Usher are spot on: one does not have to travel far to discover a wide diversity of life forms on a small area. Instead, a look under one’s feet may surpass the stoutest expectations, as soils are teeming with life. Apart from the occasional earthworm or woodlouse, one normally will see little of all that: many soil animals are just a few millimetres in size, the majority is even much smaller. To observe micro-organisms, one needs a microscope. A handful of fertile soil however contains thousands of species, billions of bacteria and meters of fungal hyphae. Nowadays, the above quote is even more relevant than when it was written around 1980, since soils have been deteriorating rapidly worldwide. This threatens the quality of our lives and livelihood by posing global challenges to food safety, climate change and adaptability, water quality and soil biodiversity.

What community of organisms lives beneath our feet and why is it necessary to know more about these organisms? The biomass of all the organisms in a hectare of topsoil from a fertile arable field is comparable with that of sixty sheep or five cows; and often his biomass is even higher in grassland and forest. All this life together forms the soil system: a complex of mutually-connected organisms in a dynamic environment, connected through interactions such as predator-prey relationships and the conversion of energy and elements.

Each organism in the soil system has a function and a place in the food web (Figure 1). Large groups of organisms have specialised in the decomposition and dispersal of dead organic matter. The primary decomposers are bacteria and fungi. Other groups of organisms feed on bacteria (bacterial-feeders), fungi (fungal-feeders), plant roots (micro-herbivores) or animals (predators and top predators). Some organisms are very selective and feed only on a few other species, whilst others, the omnivores, exploit various food sources. All these trophic interactions and biological activity drive carbon and nutrient cycles, soil structure formation, disease suppression, and ultimately soil ecosystem services. 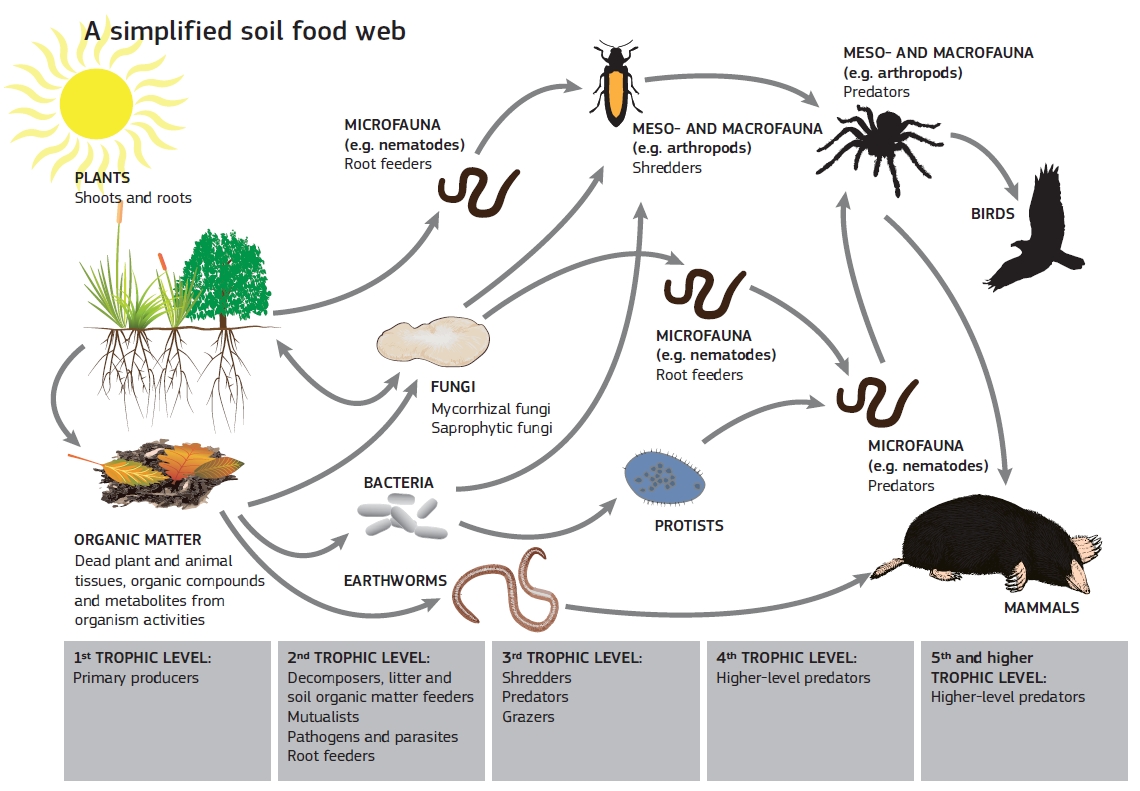 Sustainable use of nutrients and soil organic matter in arable soils is enhanced by crop diversity. Intercropping can stimulate above- and below-ground productivity. We found that this coincided with increased decomposition rates of soil organic matter, although plant species combinations matter2. For intercropping, there seems to be a trade-off between increased soil fertility and nutrient use efficiency or carbon sequestration. Implementation of winter cover cropping in arable crop rotations contributes to the growth of subsequent crops. The farmer can optimise quantity and quality of cover crop mixtures to affect soil conditions for subsequent crop growth1. This plant-soil feedback suggests legacy effects in soil by preceding plant species. Plant-soil feedback effects could be detected by our drone cameras with specific optical sensors (figure 2) 5. 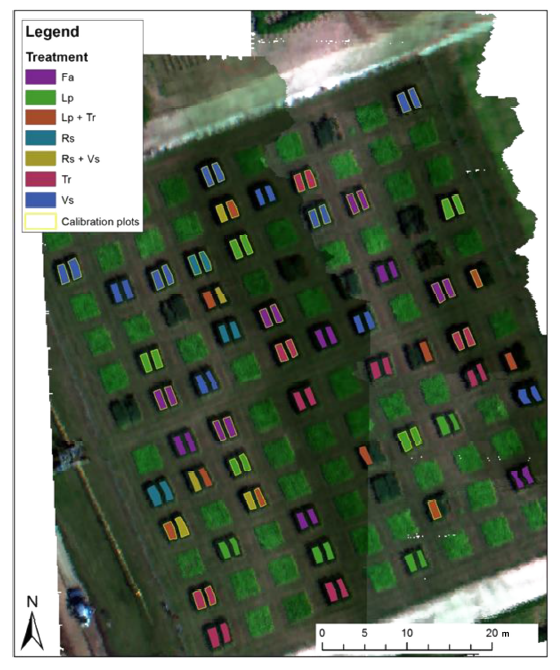 Earthworms act as ecosystem engineers as they modify their environment and that of other soil life, as a result of which crop yields on average increase with no less than 25%6. One mechanism to increase soil fertility is that earthworms increase phosphorus availability, which in general is extremely immobile and limiting plant growth. We found that inorganic phosphorus contents in earthworm casts can be 400x higher than in surrounding soil7, and phosphorus is more available as a result of pH effects and enhanced interaction between dissolved organic matter and the reactive surface of metal (hydr)oxides4.

Earthworm species diversity tends to be low under arable cropping, however. As functional ecology in earthworms differs between groups of species (Figure 2), this may limit the provision of ecosystem services. Adjustments in field management or in the surrounding landscape may enhance earthworm diversity in agro-ecosystems, but we found that arable field management should be less intensive in order to facilitate surrounding landscapes to become effective sources for divers in-field earthworm communities3. 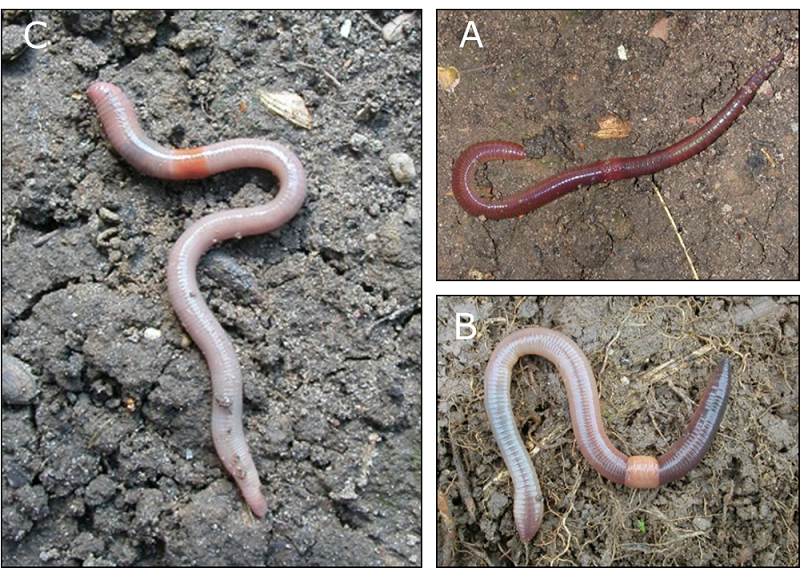 Agricultural landscapes can also be managed to increase ecosystem services provision from soil biota in relation to soil structure and water flow. Alterations in soil communities tend to facilitate subsequent changes in soil structure and hydrology8. This may help in climate-proofing agriculture. For example, earthworm abundances and functional group composition are positively correlated with water infiltration rate, dependent on tillage regime and habitat characteristics. Earthworm populated soils drain 10x faster than in their absence. The anecic earthworms that make vertical burrows and feed on plant residues at the soil surface can offset negative effects of intense rainfall on plant growth above ground9. Their burrows are preferential flow paths for excess precipitation. In turn, altered precipitation patterns can modify earthworm burrowing behaviour as in that they produce more burrows under intense precipitation regimes. As some of the strongest effects of climate change will occur through pulse precipitation events, rather than altered average trends, this role of earthworms needs to be explored further as a key to the ecosystem service of water regulation and climate adaptation in agricultural systems.

Visit the website of our Sustainable Land Use programme >

At Wageningen Environmental Research, I am head of the team Animal Ecology, which consists of some 20+ research scientists and technical staff. I am a senior research scientist with a background in soil ecology and ecotoxicology. My research activities are focused on soil biodiversity and ecosystem functioning. This includes studies on the relevance of soil fauna biodiversity for fertility and structure of soils in sustainable agriculture and nature conservation, with implications for management aimed to enhance soil ecosystem services. I currently act as vice-coordinator, work package leader and principal scientist in international projects.