We found out that in the tropical climate of the Gulf of Mexico (https://weblog.wur.eu/myessay-essays-writing-in-english/ in 2010),  and experimentally with Dutch algae (in temperate climate) marine algae make ‘sea snow’ and ‘sea snot’ in combination with oil dispersants (a kind of liquid soap). Therefore we want to test whether Arctic algae do the same thing. This is important to know. In case of an oil spill at sea, often dispersant is used to force the oil off the surface down into the water column. This works fine in clean sea water. However, during an algal bloom this can result in accumulation of the oil on the sediment in combination with sea snow and  some heavy particles. As was seen during the Deep Water Horizon oil spill.

In spring, when the ice starts to melt, a big algal bloom in Arctic areas is the start of the food chain. This year the algal bloom was very early, already in April.

Unfortunately for our plan, the water here now is crystal clear. Therefore we have concentrated many liters of sea water over 5 micrometer plankton nets. After this concentration step, the water sample was further concentrated 50x by centrifugation. We try to grow the collected micro algae further with nutrients in our culture flasks. Aiming to be able to create our own mini algal bloom later for our test. 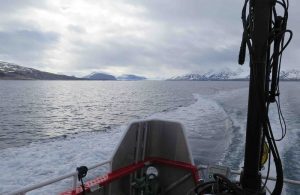