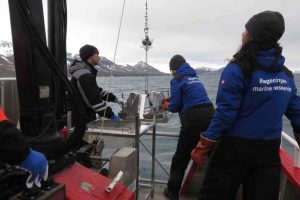 During 2 sampling trips we had the opportunity to collect some deep (300 m) and shallow (30 m) sediment samples with a Van Veen – sampler. With its ‘big mouth’ opened the sampler is lowered. It closes as soon as it bumps onto the sea floor.  On the deck, a spoon is used to collect the upper sediment layer via small hatches in the closed sampler. In the top 1 cm layer most of the sediment life occurs. This includes foraminifera, unicellular animals with a calcareous skeleton that often look like a mini snail. Because of this external skeleton, these microscopically small animals can fossilise. 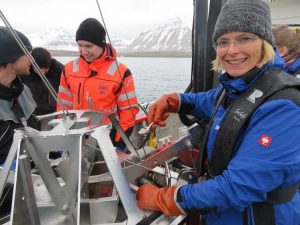 In the Gulf of Mexico sediment cores were sampled after the Deep Water Horizon blow out. From the foraminifera and diatom composition a clear picture could be obtained from the recent as well as historical ocean conditions. At IMARES in Den Helder, Wageningen UR studies the consequences for benthic life of the toxic oil-sea snow-particulate sludge layer on the sea floor as it occurs in the Gulf of Mexico since the blow-out. In these experiments also effects on benthic foraminifera are included for the first time. 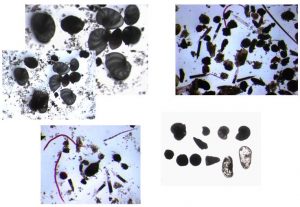 First impression of some foraminifera and other microscopic animals from the sediment.They are between 125 and 250 µm in size, smaller than a normal sand grain (© Tinka Murk)

The spooned sediment is sieved aboard. Everything smaller than half a millimetre, 500 micrometre (µm), is collected. The captain and research assistant are astonished by the numerous tiny creatures that live in the remaining fine mud. Later, in the lab, Bengal rose is added to colour living cells and the sediment sample is sieved further over meshes of 250, 125 and 63 µm . We found a lot of forams, needle shaped diatoms and other small animals such as nematods in all of the collected fractions. As far as we could see, no micro-plastics or nylon fibres were present in the sediment.

Film: a glacier, caving in 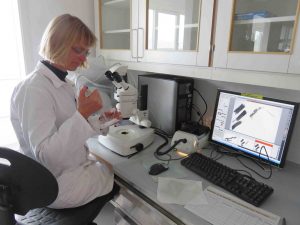 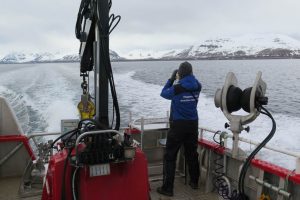 View from the boat (© Tinka Murk with thanks to Jesse Jorna)