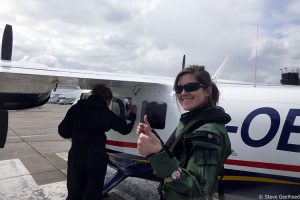 Five days ago aerial team III gathered in Inverness, Scotland. Leo, the pilot, flew in from Liverpool, Linn from Berlin via Amsterdam where she met Steve. Marie (see picture) came from Svalbard via Oslo and London. Typical Scottish weather welcomed us. Thus providing enough time to get ready for the survey flights. We used the time for reading the protocol, doing dry runs with the improved software (always fun with  two ‘ observers’  trying to overload the navigator with data), memorizing species codes, discussing potential ID-pitfalls and sketching the perfect scenario till the end of July. Frequent checks of weather forecasts, meant regular adjustments of this scenario though. 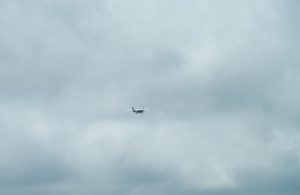 As predicted, the weather improved. A short spell of decreasing wind was enough for an afternoon flight in and out the Moray Firth on Wednesday. Good to see the tension in the team building up. Despite hundreds of hours of survey experience everyone was eager to get airborne. Once on effort we were soon routinely recording signs of anthropogenic presence: fishing gear and debris kept us busy. Marine mammals kept us waiting till the second transect. Harbour porpoises were the first cetaceans we recorded. In the second half of the survey bottlenose dolphins and a minke whale showed well. Heightening the team spirit. All in all a good first flight.

Back at the hotel data validation was tedious work, but showed few (typing) errors in the data we recorded. Now we are back to checking weather forecasts. Eager to fly again. Maybe tomorrow. Or the day after.