My internship in The United States: Part 1

By: Lizzie Richardson · 22 February 2019
Category: Education, Student life
In August 2018 I packed up my things, said goodbye to the Netherlands and flew to the United States for my internship. I was based in Bozeman, a tiny town in the middle of Montana famous for its mountains, the Big Sky ski resort, and Yellowstone National Park. I had a really great time in Bozeman and thought I would share some of my highlights from the first few months.

1: Floating down the Yellowstone River

The lab I joined was very active and everyone skied, ran, hiked, biked, and hunted. It was very common for the post-doc to disappear for a few hours in the middle of the day to go cross-country skiing and if there was fresh snowfall at the local ski resort, the lab was almost empty. In my first week, we went floating down the Yellowstone River to celebrate a PhD student completing their defence. Both my supervisor and another lab member had rafts so about twenty of us (lab members and family) piled into these rafts and paddled down some medium-ish white water rapids. My supervisor was the captain on the raft so he had a great time sitting on the back of the boat shouting at us to paddle faster whilst another lab member sat at the front fishing. After a few hours on the water, we enjoyed a barbecue on the shore and I got my first taste of elk! In Bozeman, it is very common to see bison, elk, deer, and antelope on the menu. That day coupled with some pretty great lab results was a fantastic way to start my six-month journey.

I was very excited to spend Halloween in America as Halloween is tiny in Australia, there are only a handful of trick-or-treaters and no one decorates their house. I was expecting great things and boy did Bozeman did deliver. Almost every house was covered in lights, fake ghosts, pumpkins, and zombies. Walmart was awash with Halloween decorations and we could barely drive on Halloween night for fear of hitting all the children. I wanted to go trick-or-treating but was told by my American friends that I was too old and no-one over the age of 14 trick-or-treats. So instead I spent the evening at the Chi Omega sorority house as two of my good friends were Chi O’s watching Halloween movies and eating our way through a bag of candy we did not have to share with little kids. 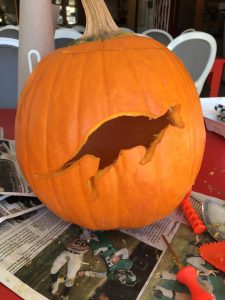 It wouldn’t be a trip to Bozeman without visiting the world famous Yellowstone National Park. I was incredibly lucky because the lab I was interning in does a lot of work in Yellowstone. They analyse virus populations in the hot springs and so I joined them on a sampling trip. The hot springs they sample are not the ones open to the public and thus don’t have any nice walk-ways to them. We had to hike through the thick forest to reach the first sampling site. Once there I had a great time kneeling next to a boiling hot pool of acidic water trying to get some samples without falling in. After collecting we had to hike out but this time with 20kgs of water on our backs. I have been told that it is easier to sample in winter when there is snow on the ground because you can ski in and out rather than walking.

4: New York and the Mid-term elections

In November I flew to New York for a day to interview for a graduate programme in China. Bozeman is quite far from New York and I spent more time travelling and stuck in New York traffic than I did in the city itself. Unfortunately, I arrived very late on Monday night and left very early on Wednesday morning so only had a few hours after the interview on Tuesday to explore. I walked down to Times Square and naturally ended up in the Disney store before heading over to Central Park pretending I was in the TV series F.R.I.E.N.D.S. The interview itself was terrifying and I was convinced I had blown my chances, especially as I had told the interview committee that “I believed the only reason I was in the interview room, to begin with, was because of my privileged upbringing and not due to any actual talent, and that there are many other people who deserve the position more than I do” (pro tip: don’t tell the people interviewing you for a position that you don’t think you are good enough to be there). Then I got into an intense discussion with a Doctor about whether it was possible to cure Huntington’s disease using CRISPR/Cas which was an odd conversation to be having in the midst of an interview on China and policy. Apart from that, the day was incredible and I was fortunate enough to meet some fantastic people and made some great friends. The night of my interview was the US Mid-Term elections and after having dinner with some of the other candidates I returned to my room and watched the returns roll in as I am slightly obsessed with US politics.

A few weeks after my trip to New York I was yet again leaving the state for Thanksgiving break. My friend invited me to Idaho to celebrate Thanksgiving which I eagerly accepted. We drove from Bozeman to Boise which was a seven-hour drive and I got my first taste of driving on the right-hand side of the road. In Australia, we drive on the left and I hadn’t driven since leaving Australia almost two years ago. But like riding a bike, driving came back instantly. The thing that confused me the most was not driving on the wrong side of the road but converting miles/hour to km/hour. I kept forgetting that 90 miles/hour is actually 150kms/hour which is 20kms/hour above the maximum speed in Australia. No wonder everything was zooming by so quickly. The drive through Montana and Northern Idaho were spectacular, especially the Grand Tetons. When we got to Boise my friend’s father was a pilot so he took us up flying over the great lava lake and through the canyons in a rickety four-seater plane. It really was one of those “how did I end up here” moments, two years ago I was in Sydney in my family home and now I am flying over Boise. Thanksgiving day started off with the Macey Day Parade (which is basically just one big advertisement), then moved onto the peculiar food (was a fan of sweet potato and marshmallows but not so much the green bean casserole), and finally the Black Friday Sales that actually started on Thanksgiving evening. The drive back was just as beautiful but a lot more challenging as it had begun to snow and the roads were icy, as an Australian I can barely walk on ice let alone drive, but we made it back in one piece. 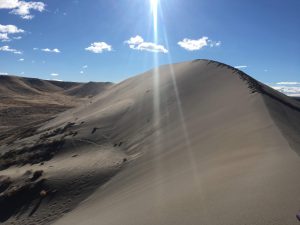 Sliding down sand dunes in Idaho 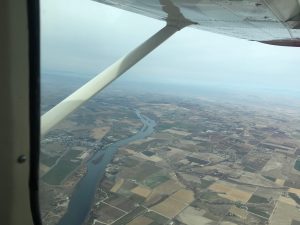 Road-tripping from Bozeman to Boise

Constantly amazed by the sizes of the drinks in America. This was a “medium”

If you want to read more about my time in the US then check out this post!