My internship in the United States: part 2

Bozeman is surrounded by mountains and so there is a huge climbing community. The Montana State University gym has a large bouldering wall which my friend and I eagerly used almost every day. However, after a few weeks bouldering at the university gym, we moved to the local climbing gym called Spire. This gym was fantastic. It was built in an old barn and had over one hundred different routes with everything from bouldering to lead climbing. We started on top-rope and auto-belay courses which were challenging both physically and mentally. My favourite climbs were the ones where you had to contort your body into lots of weird shapes and angles, like a game of twister but just 12 meters off the ground.

In January, I was certified to lead climb where you clip into the quickdraw as you climb up. The scariest thing about lead climbing is that if you slip you will fall at least a meter, sometimes more, and your belayer will be pulled up off the ground to act as a counterbalance. The first time this happened I accidentally let go of the rope and was pulled up so high that I ended up on the same level as my friend that was climbing. Pro tip: don’t let go of the rope if you are belaying! Unfortunately, I arrived a bit too late to climb outdoors as the snow had set in but hopefully I can continue climbing in Australia. 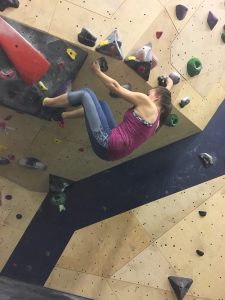 Enjoying the bouldering wall at MSU!

About 20 minutes from the town centre is a place called Hyalite, it is a frozen lake and forest that is very popular with cross-country skiers. My friend took me up there one night and we spent a lovely few hours sitting around a fire in the snow and cooking dinner. As we were quite far in the mountains the only light was from our fire and so the sky was covered in stars. It was spectacular! Unfortunately, my favourite constellation the Southern Cross was nowhere to be seen (as you can only see it in the Southern Hemisphere). There is something eerily beautiful about seeing a dark sky covered in stars, I think it is a rare sight these days given all the light pollution so those few hours emerged in nature was remarkable.

3: Board games and Lord of the Rings

One of the best things about travelling and living in different countries are the people you meet. I have learnt that if you want to make friends in a new town you need to seek them out and say yes to everything. I was invited to a hay-bale maze by a student from MSU (literally a maze made out of hay-bales) and then a few hours later ended up playing board games with their friends’-friend’s-friend’s (or something like that). A few weeks later these friend’s-friend’s-friend’s invited me over to play more board games and was introduced to a whole host of games I had never seen before (anyone reading this needs to play “Munchkins” and “Let’s Kill Hitler”). To top it off, they then threw a Lord of the Rings extended-edition movie marathon day. We started at 7:30am with breakfast, watched the Fellowship of the Rings, had lunch, watched the Two Towers, had dinner, and then watched The Return of the King. I am still trying to figure out how I went from running around a hay-maze and playing in a barrel of corn with complete strangers to marathoning Lord of the Rings with friends.

Okay, so confession, a huge reason I decided to move to Bozeman was to snowboard. I am incredibly fortunate that I learnt to ski and snowboard when I was a child. My brothers used to compete for their schools so we spent every Australian winter down at the snow (yes you do get snow in Australia but not a lot). We had a cross-country skiing lab trip in December which was fantastic. I used to be able to ski so I figured I could probably cross-country ski but boy was I wrong. Going up the hill was fairly easy, just very cardio intense but going down was a struggle. I think I fell about 50 times but it was still lots of fun.

Then finally in January, I made it up to Bridger Bowl. Bridger is a ski resort about 20 minutes from downtown Bozeman so very easy to access. I hadn’t snowboarded since 2014, but like most things it came back instantly and within an hour we were cruising down double-black-diamond runs in knee-deep powder. We headed over to an area of the resort called Slushmans which is for experts only. To ski this area you need to wear an avalanche receiver as it is unpatrolled and also unmarked (luckily my supervisor had a few spares). The skiing was fantastic, soft powder, interesting tree-runs, and lots of jumps. However it is unmarked and I almost went off a cliff – too eager for more powder. To leave this area most people take off their skis or boards and hike up to the ridge and drop in from there. But we were told not to go to the ridge unless you know where you are going as it is really dangerous (all those unmarked cliffs) so instead we headed out the “easier” way. I say “easier” because it was still very difficult. I had to unclip and hike in a few places as we had dropped down too far and had to ski through some very narrow tree runs and duck to avoid being hit by branches. I think it took about one hour to get out of the area but we made it back safely and were eager to head there again, only this time with someone who actually knew the way out. 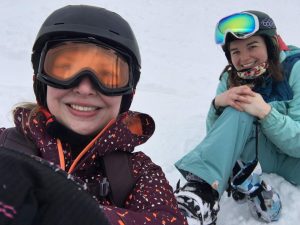 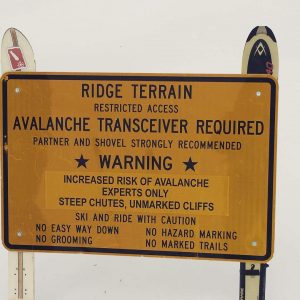 Enjoying the fresh powder at Bridger

5: The Fork and Spoon

But without question, my favourite time in Bozeman were the nights I spent volunteering at the Fork and Spoon restaurant.  This restaurant runs on volunteers and the idea is that patrons only pay what they can for their dinner even if it is $0. I spent many happy hours in the kitchen plating meals or serving patrons and learning about their life. I am in a very fortunate position and have been incredibly lucky to have the means and ability to study in the Netherlands, travel Europe, and then hop over to the United States. So whenever possible I seek out a way to help those in less fortunate positions through giving my time and money. The only reason I am where I am today and have some incredible opportunities ahead of me is because of the hours spent volunteering in libraries, hospitals, child-care centres, labs, and restaurants. So on my final day volunteering at the Fork and Spoon I donated $500 to the restaurant as a way of thanking everyone who has gotten me to where I am today, and it is now on my bucket list to open a pay-what-you-can-restaurant somewhere in the world!

I was very hesitant to move to the US, after lifting my life up and moving to the Netherlands I wasn’t ready to lift it up again and move to the US. I absolutely loved my life in the Netherlands and I loved the people in it and I was very worried that I would lose those connections and friendships in jumping to yet another place. My time in the US has been a rollercoaster, lots of ups and many downs, but I am so thankful to have had to opportunity to ride. Now it is time to head back to Australia and enjoy the 30C heat and recharge briefly before moving to Asia.